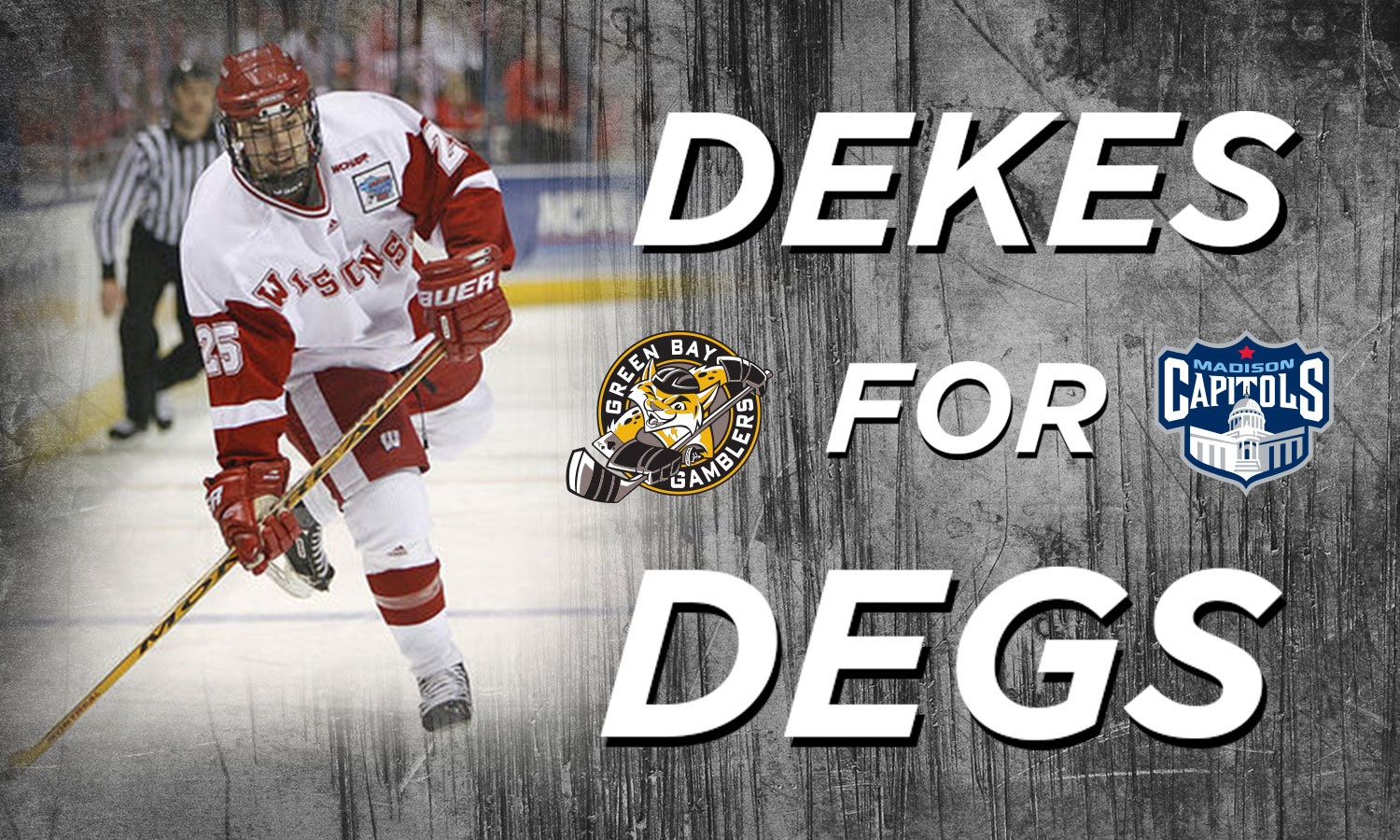 The Madison Capitols and Green Bay Gamblers of the United States Hockey league have joined forces to raise awareness against multiple sclerosis, and lend support to former Gambler, AJ Degenhardt, in his battle with MS. The two teams will play a home-and-home series this weekend to finish off the 2018-19 season.

Degenhardt, 36, played two seasons for the Gamblers from 2000-2002 before heading to the University of Wisconsin – Madison where he was a four-year starter. While at Wisconsin, Degenhardt was an integral part of the team’s success, including his senior season when the Badgers brought home the 2006 NCAA Championship.

Upon graduation, AJ exchanged his skates for a whistle. In the past 11 years, Degenhardt has coached at the AAA level, including three years as general manager and head coach of the Coulee Region Chill of the North American Hockey League. As the head coach of the Chill, Degenhardt led the team to two NAHL playoff berths, including a stretch in his last season where his team went 23-9-1 to make the playoffs.

In 2011 while coaching Team Illinois, AJ received some life altering news. Degenhardt was diagnosed with multiple sclerosis, a disease of the central nervous system in which the body’s immune system eats away at the protective covering of nerves. The physical symptoms and the progression of the incurable disease vary, as AJ requires the use of a wheelchair.

“It’s been a struggle to cope with, especially early on,” says Degenhardt. “I am very thankful for the amount of support I’ve received from family, friends, and the organizations I’ve been a part of my entire life. Their support keeps me positive every day in this fight.”

Despite the disease, AJ hasn’t let anything deter him. Degenhardt is a loving father of two twin girls, Rachel and Blaire, who will be turning four years old this upcoming July.

“They're one of the things in my life that are able to make me forget about my disease and make me focus on them and show my love for them."

On Friday night, AJ will attend the Green Bay Gamblers game as they host the Madison Capitols on MS night, presented by Marco. A portion of the ticket proceeds will benefit AJ and multiple sclerosis.

On Saturday, AJ will make his way to Madison, and be in attendance as the Capitols host the Gamblers at 7:05pm for the final game of the regular season.

The Capitols will be hosting a week-long auction with help from Dash Auctions, beginning Tuesday, April 9 at 12:00  PM CT and running through Saturday, April 13 at 11:59 PM CT.

All items in the auction will have a personal connection to AJ’s playing days and his former teammates.

If you would like to purchase tickets and help support this cause, please visit the following links:

If you would like to bid on the auction, please download the DASH Auction app on your phone, or visit https://bit.ly/2KmcZMM.

The Capitols and Gamblers battle it out for the final two games of the weekend this weekend. If you have any questions about the games or the event, please call the Capitols office at 608-257-2277, or visit www.madcapshockey.com.