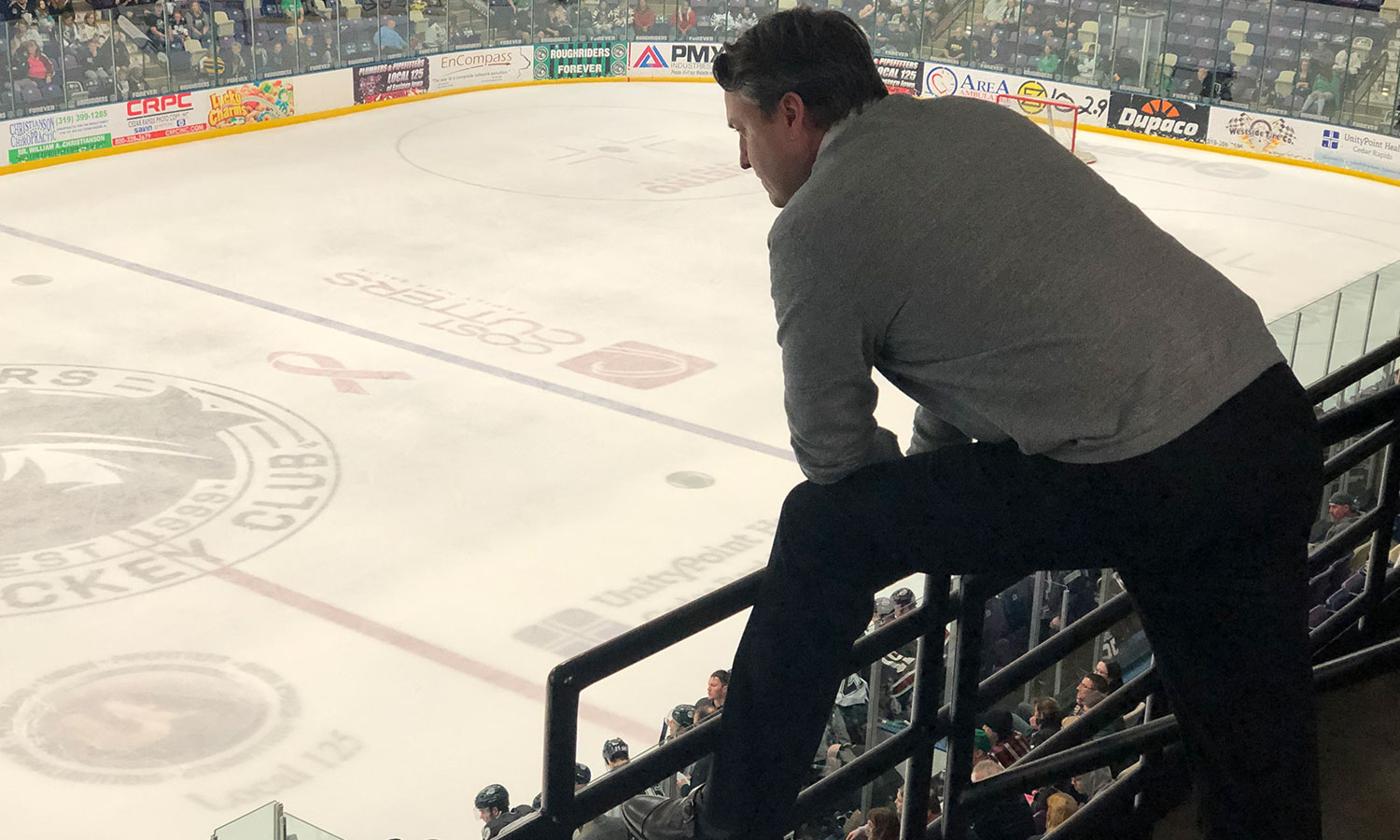 The United States Hockey League announced today that Chicago Steel General Manager Ryan Hardy has been named the 2019 USHL General Manager of the Year as determined by a vote of League general managers.

Hardy joined the Steel on May 30, 2018 after spending two seasons scouting amateur prospects across North America for the Boston Bruins of the NHL. As General Manager, Hardy oversees the team’s hockey operations department including scouting and player development, coaching and the team’s exclusive partnership with Belfry Hockey.

“In his rookie year as General Manager, Ryan Hardy has earned the respect of his peers through his tireless work ethic, a special eye for talent, a proven ability to recruit and mentor coaches, and a humility and openness that inspires both our players and our professional staff,” said Steel Owner Larry Robbins. “On behalf of the entire Steel team and family, we congratulate Ryan on becoming the USHL General Manager of the Year and we appreciate his continued commitment to elevate the Chicago Steel to become an elite player development franchise in junior hockey in North America.”

The Madison, Conn. native built a roster this season that finished second in the Eastern Conference with a 37-21-4-0 record. With only a handful of players returning from a 2017-2018 team that advanced to the Eastern Conference Semifinals, expectations were low for the Steel in the minds of many. The Steel were ranked 16th out of 17 USHL teams in the usahockeymagazine.com pre-season USHL power rankings. Not only did Hardy engineer a roster that qualified for the playoffs for a third-consecutive season for the first time in franchise history, the 2018-2019 season has been marked by many individual accomplishments, including four players being named to All-USHL and All-Rookie teams including forward Nick Abruzzese winning the league’s scoring title. Twenty-two of the Steel’s current 26-man playoff roster have earned Division 1 opportunities.

“Our goals in Chicago are, first and foremost, to facilitate the development of talented hockey players and, secondly, to compete for the Clark Cup,” said Hardy. “Garnering personal accolades is not relevant in our program. While I am appreciative of the recognition from my peers, this honor does not reflect the work of one individual, but rather the talent, hard work, and passion of our Coaching Staff, Hockey Operations Department, and most importantly, every one of the players who have donned the Chicago Steel crest this season.”

Of the 26 players currently on the playoff roster for the Steel, 17 were brought in by Hardy. Seven players on the roster were drafted this pas summer, five were acquired this past offseason, three were acquired midseason and two were signed as free agents during the season.

“If there is one aspect this season that I take the most personal pride in, it would be the identification and procurement of our coaching staff, who are far more responsible for this honor than I am,” said Hardy.

“Ryan’s role requires a unique ability to connect and communicate with players, coaches, parents, scouts and advisors alike, and Ryan does so with honesty and integrity all while having fun and injecting passion and enthusiasm into our organization each day,” said Steel President Dan Lehv.

Prior to joining the Bruins, Hardy spent parts of four seasons (2013-2017) with USA Hockey’s National Team Development Program (NTDP) and served as Director of Player Personnel, Assistant Director of Player Personnel and Regional Scouting Manager. Hardy and his colleagues were responsible for building the 2017-2018 NTDP teams that had the most successful USHL season in the history of the program. During his time with USA Hockey, Hardy’s teams won the Gold Medal at the IIHF U18 Men’s World Championship in 2014, 2015 and 2017 and more than 60 NTDP alumni were selected in the NHL Entry Draft.

In addition to his work in scouting and player personnel, Hardy has coaching experience at the NCAA level with Sacred Heart University and Williams College as well as at the junior hockey level with the Springfield Jr. Blues (NAHL).