THE SIOUX FALLS STAMPEDE WIN CLARK CUP CHAMPIONSHIP WITH A 5-1 VICTORY IN GAME 3 OF THE 2019 CLARK CUP FINAL. 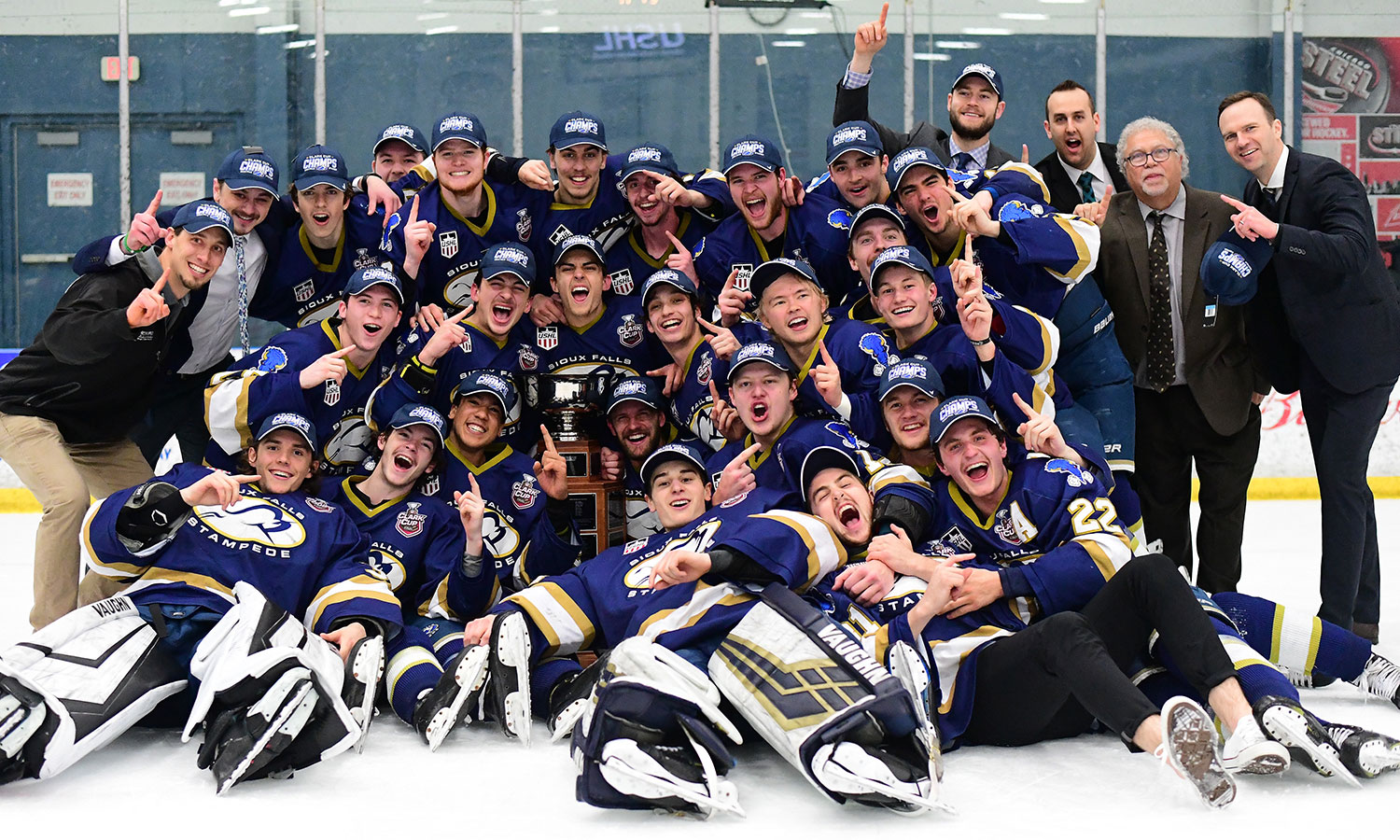 The Sioux Falls Stampede needed just three games to close out the Clark Cup Finals against the Chicago Steel. Sioux Falls capped an incredible playoff run with a convincing win on the road, as they downed Chicago 5-1 on Friday night.

The Stampede won 11 of 12 games to claim their third Clark Cup. Sioux Falls trampled their way to the title, sweeping both the Clark Cup Finals and the Western Conference Finals. The victory gave Sioux Falls their second Clark Cup in the last five seasons and third in team history.

Jaxson Stauber was named MVP, recording an 11-1 record with a 1.46 goals against and a .941 save percentage during the playoffs. As was the case all season long, balance played the main role in Sioux Falls championship. The Stampede received points from 19 players during the postseason and saw 15 different players find the back of the net.

The game got off to a slow start for the Stampede, as the team managed just four shots in the first period. However, shot number four found the back of the net as Anthony Romano hit pay dirt for the first time during the postseason. Chicago fired 11 shots on net, but Stauber didn’t blink.

Sioux Falls kicked off the scoring early in period two, as Blake Bride banged home a rebound on the doorstep at 4:22 of the period. Bride grabbed assists from Sam Stevens and Andre Lee to double the Stampede lead. After the teams traded penalties during the middle portion of the middle stanza, Sam Stevens notched the third tally of the game for Sioux Falls with a shorthanded goal at 15:23. Stevens, went hard in to the boards after the goal, but managed to get up and put his team up with a commanding three goal lead. The Stampede defense was much stronger in the second period as well, allowing only five shots to Chicago’s high-powered offense.

In the third period, Chicago pushed back and were finally able to get a puck past Stauber with just under four minutes left in regulation. Josiah Slavin scored at 16:06 of the third to cut the Sioux Falls lead to two. After a few minutes of scoreless hockey, Sioux Falls deposited two goals into an empty Chicago cage just seven seconds apart to put the game to bed.

Despite the loss, the Steel capped off a strong season. After rolling in to the playoffs as the Eastern Conference’s second seed, Chicago dispatched of Cedar Rapids in four games. The Steel then took down the Eastern Conference’s top regular season team in the Muskegon Lumberjacks in four games as well. Chicago finished the playoffs with the top three scorers during the postseason.

Sioux Falls Championship By The Numbers:

-Sioux Falls played in both the second longest USHL game in playoff history and the second longest tier-1 Clark Cup Final game. The Stampede secured overtime victories from four different goal scorers. In addition, Sioux Falls became the first team during the tier-1 era to play more than one game that went past single overtime during one postseason.

-Sioux Falls became the first team in tier-1 history to win a Clark Cup without a single point from their regular season leading scorer. Artem Ivanyuzhenkov was held off the scoresheet during the playoffs despite securing 50 points in the regular season.

-The Stampede’s 11-1 postseason record is the best record in terms of winning percentage in tier-1 history during a single postseason. Sioux Falls’ only blemish was a 6-2 defeat in game two of the Conference Semifinals against Waterloo.