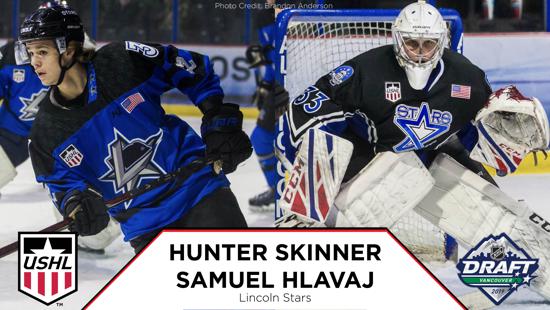 The Lincoln Stars have a handful of players featured on the final NHL Central Scouting list rankings including defenseman Hunter Skinner and goaltender Samuel Hlavaj. Skinner is ranked #120 among North American skaters while Hlavaj is the #5 North American goaltender eligible for the 2019 NHL Draft.

Skinner registered 24 points (5-19-24) in 52 games this season including 13 points (2-11-13) since joining Lincoln from the Muskegon Lumberjacks (3-8-11, 24 games) midway through the season. The Western Michigan University commit registered a four-game point streak (1-3-4) in January, starting with an assist against his former team as the Stars fell 6-4 to the Lumberjacks. With Muskegon, the Brighton, Mich. native registered six points (1-5-6) in a nine-game stretch from October 1 to November 12, including four points in five games.

The former Belle Tire defenseman was named runner-up for “Best Shot, Defense” among the American Draft Class according to McKeen’s Hockey 2019 NHL Draft Guide. Skinner represented the Lumberjacks at the 2019 USHL/NHL Top Prospects Game and was ranked a C skater on the NHL Central Scouting Preliminary list on October 1 before earning a B ranking on the Players to Watch List on November 12.

Hlavaj represented Slovakia at both the World Juniors and U18 World Championship in 2018 after playing in the Slovakian U20 league prior to his move to the USHL.

"Hunter was a young kid with a high skill set for us this year. He's extremely athletic, he has the ability to play a game with pace and physicality .He is essentially what you think of when you think of an NHL pick. He's a young kid that's spent a lot of time playing forward in his career up until about a year ago. He's continuing to develop his defensive game and I think that's his focus going forward: to be that guy that can play in any situation, and be someone who's sound and responsible defensively. Because of his athletic ability and his skill set, he does have that ability to add to your offense and fuel your offense. I think he's an intriguing guy for a lot of NHL teams, first based on his athletic ability, his ability to recover and skate, but ultimately he's a big body that can chip in on offense and help your team win in a variety of ways. We're excited to have him back this year and it's an exciting year for him. We look forward to what he'll bring to us on the ice as well as his impact as a veteran and a leader."
– Cody Chupp, Lincoln Stars Head Coach

"Samuel's foundation as a goaltender is very good. He looks like a goalie in the net. His ability to develop from here is based on the amount of work he puts in, but that foundation and that base are elements of his game that are intriguing. He's had a ton of success internationally in Europe. I think he's a kid that wanted the adjustment to go quicker and more seamlessly than it did last season, but he's not dissimilar from a lot of European goaltenders that have come over and struggled a little bit to adjust. I have no question he's going to be a fantastic goalie. If you look at the guys, especially the European goalies that have come into our league and maybe struggled a bit in their first year, that second year, whether it's in our league or that second year in North America, they've really taken a big step. Obviously, I think he's an exciting prospect and I'm not alone in that. There's a lot of NHL guys that feel the same way. The question is where does he go from here? Continuing to develop his habits in his game off the ice and on the ice are going to be important like any young kid, but there's a great foundation there with a lot of potential that's very exciting."
– Cody Chupp, Lincoln Stars Head Coach

“The 6-4 netminder played a total of eight games at the World Juniors and U18 World Championship. Hlavaj is a calm and relaxed goalie who reads the game well. He plays an economical style as he doesn’t make many unnecessary movements.”– McKeen's Draft Guide