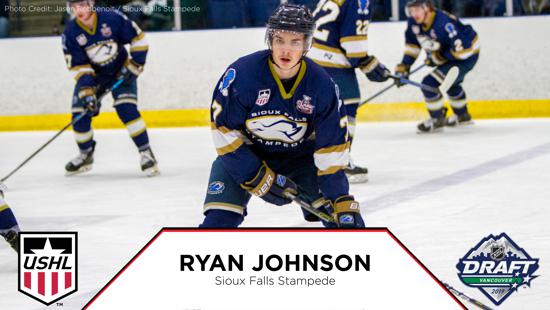 Sioux Falls defenseman Ryan Johnson hopes to ride the thrill of helping his team win the Clark Cup Championship to hearing his name called early in the NHL Draft as NHL Central Scouting ranked the Irvine, Calif. native #33 among North American Skaters in its final rankings.

The University of Minnesota commit comes off a rookie USHL season that saw him collect 25 points (6-19-25) in 54 games before he pitched in another eight points (2-6-8) in 12 Clark Cup Playoffs games as his team went 11-1. During the regular season, Johnson recorded a USHL career-high three-point night (1-2-3) on October 19 as the Stampede beat the Waterloo Black Hawks 6-5 in overtime, thanks to a goal set up by Johnson – who was subsequently named USHL Defenseman of the Week on October 22. Johnson added another pair of two-point nights throughout the season (February 8 vs. Chicago and April 2 vs. Lincoln) before his only multi-point game of the playoffs came in the Clark Cup Final clinching Game 3 as the defenseman notched a goal and an assist. 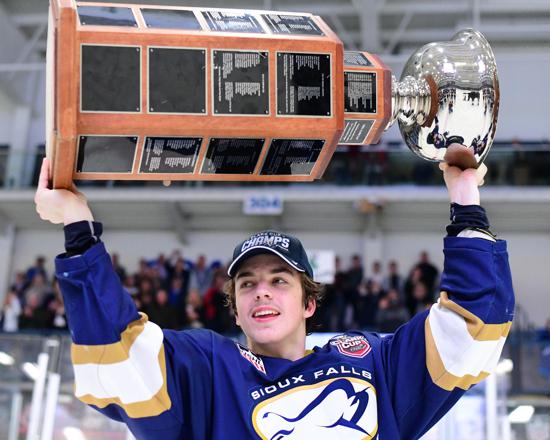 Johnson represented the Stampede at the 2019 USHL/NHL Top Prospects Game and also skated for Team USA at the World Junior A Challenge earlier in the season. Ryan is hoping to follow in the footsteps of his father, Craig, who was taken #33 overall by the St. Louis Blues in the 1990 NHL Draft. Craig went on to play 557 NHL games with the Blues, Los Angeles Kings, Anaheim Ducks, Toronto Maple Leafs and Washington Capitals, collecting 173 points (75-98-173) along the way. 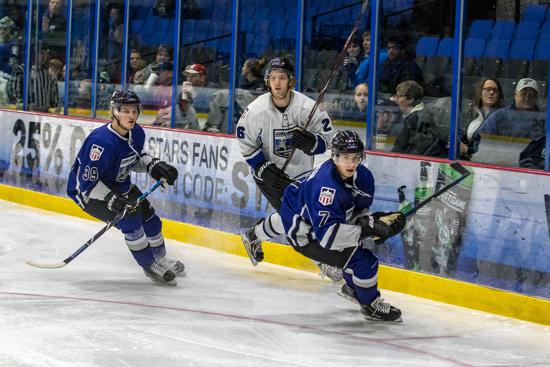 The Anaheim Jr. Ducks product climbed slightly from #36 in the Central Scouting Midterm rankings after being listed as a B-rated skater in both the service’s Preliminary and Players to Watch lists.

Johnson is one of seven Stampede players to find their name listed by NHL Central Scouting this season and led Sioux Falls in the final rankings alongside forwards Anthony Romano (#52), Ethan Phillips (#78), Austen Swankler (#109) and Jami Krannila (#143) as well as defenseman Maxwell Crozier (#85). Stampede forward Andre Lee was ranked #167 at the Midterm rankings but did not appear in the final list.

“Ryan established himself as one of the top defensemen in the league this year. His ability to break the puck out, transition and defend was a direct result of his skating and passing skills as well as his hockey IQ. [His stats] are only going to get better as he gains strength and experience. Ryan is a complete defenseman and his style translates in today’s game. He was a big part of our team’s success this past season.”
– Scott Owens, Sioux Falls Stampede General Manager and Head Coach

“He is a fantastic skater, exceptionally smooth with plus edge work. What he does better than most is read the game and make the right decision. He has an extremely high panic threshold. When he gathers the puck in his own zone, he has a plan for what to do with it, and calmly executes that plan. Before he gets that puck, he provides shadow coverage on opponents, without any daylight to be found in the gap. Before that opponent can even look for an outlet, chances are that Johnson will have cleanly stripped him of the puck and delivered a transition pass to a teammate.”
– McKeen’s Draft Guide