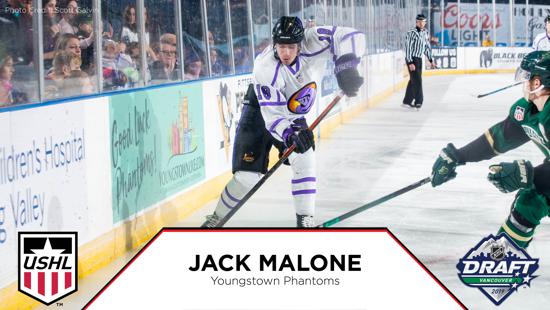 Jack Malone finished the season second in Youngstown Phantoms scoring behind only Brett Murray, who was drafted in 2016 by the Buffalo Sabres, an accomplishment Malone hopes to replicate this weekend at the NHL Draft.

The Cornell University commit registered 59 points (19-40-59) in 57 games this season, culminating in a USHL total 74 points (23-51-74) in 111 games over three seasons with the Phantoms. The Madison, N.J. native recorded up a nine-game point streak (8-9-17) from December 1 to January 15 that included a hat trick (3-1-4) on January 4 against the Sioux City Musketeers. The four-point night was the first of two in the season as he would later pick up a quartet of points (2-2-4) against the Chicago Steel on March 15. Malone was later named the USHL Forward of the Week on January 7 after collecting six points (3-3-6) in a pair of games that week. During his nine-game point streak, five games featured multi-point performances, including four in a row (5-6-11) from January 4 to 12.

Malone went more than two games in a row without a point only twice this season. The forward registered another long point streak, this time seven games (5-6-11), from October 26 to November 16. Malone finished his most productive USHL season sixth in assists (40) and tied for 13th in points (59) among league skaters. 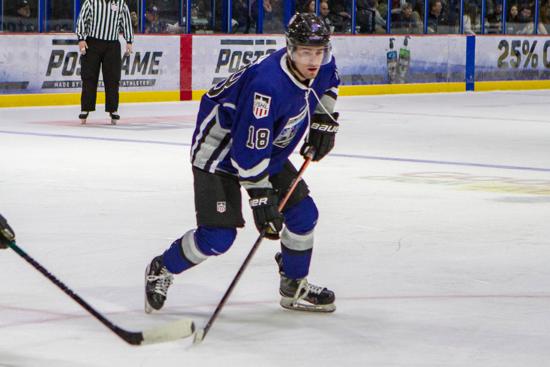 The Delbarton product scored a goal at the 2019 USHL/NHL Top Prospects Game after representing his nation twice this season, at both the Five Nations tournament as well as the World Junior A Challenge.

Malone was the lone player with Youngstown ties featured by NHL Central Scouting this season and will look to make it six years in a row at least one Phantoms player is drafted.

“Jack is a tremendously talented 200-foot forward,” said Head Coach Brad Patterson. “Jack makes everyone around him better by seeing plays before they happen. His athletic power is as good or better than any player we have had in our program, which bodes well for his future projection as an NHL player. He will be an asset to any organization.”
– Brad Patterson, Youngstown Phantoms Head Coach