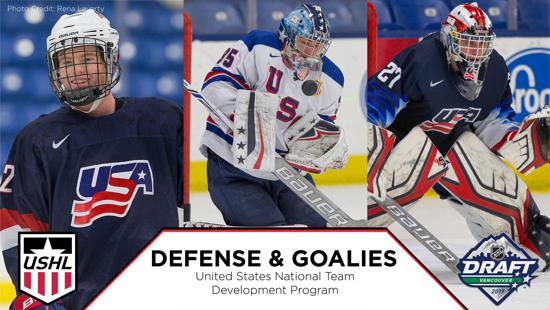 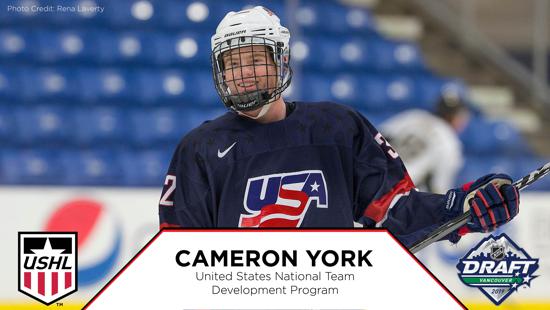 York, an Anaheim Hills, Calif. native, registered 47 points (10-37-47) in 61 games through two seasons in the USHL, including 33 points (7-26-33) in 28 games this season. Seven of the University of Michigan commit’s points this season came on January 15 in a game against the Youngstown Phantoms when York scored a hat trick and picked up an assist on four other goals for an incredible seven-point night (3-4-7). York’s impressive offensive game was one of four games with three-or-more assists and one of his six games this season with three-or-more points. He was named USHL Defenseman of the Week after his performance.

The Shattuck-St. Mary’s product also finished the USHL season with a multi-point game in five of his final six games.

“He’s got ice in his veins. Cam’s number one attribute is he doesn’t ever panic. He’s so efficient in every facet of the game – whether you want him on the breakout and it’s a clean exit, or you need him to block a shot off a faceoff and he’s got to wear a puck from the point. He’s going to do it and come back to the bench with a smile on his face. You’d expect a guy who put up the amount of points he does to have a bit of an attitude and maybe be leery of doing the dirty work. That’s the opposite with Cam. There’s not a piece of his game that’s a question mark. He’s a real solid prospect.”
- John Wroblewski, NTDP U18 Head Coach on Cam York

NHL player comparable: Morgan Rielly
“There’s hardly anything that catches Rielly off guard. He seems to turn in flux situations into offensive opportunities. On the powerplay, he’s so natural to delegate – when the shot is there, he takes it. He’s efficient at using his flanks on the powerplay and keeping pucks alive. Yorkie has the same abilities.”
- John Wroblewski via The Athletic

“With the best puck skills in the Draft among all defensemen this side of Bowen Byram, York would not need much more to stake a claim as a likely first rounder. With size among defenders no longer high on the scouting priority list, his smaller and leaner frame is not a detriment to his chances either. … York, along with Jack Hughes, were deemed to be so much better than their peers as 17-year-olds, that they both spent large chunks of their first years with the (NTDP) playing up a year, with the previous U18 class. Even then he was an advanced puck moving defenseman. … He is a very mobile defender, without necessarily being a dynamic skater. He is nimble and agile and forces defenders back on their heels when he leads a rush from end to end, a semi-regular occurrence. His feet are both fast and quick, of which the latter trait is demonstrated with the way he quickly cuts down space from opponents in his own zone. … As strong as his offensive game, he is almost as strong in his own zone. … He keeps tight gaps and uses his stick expertly to cut down on available space for opponents. To date, his lack of bulk has not been an issue in his endeavors to minimize offense for the opposition.”
– McKeen’s Draft Guide 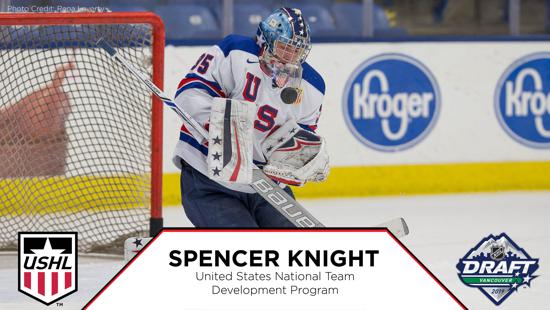 A Darien, Conn. native, Knight registered a 28-5-0-0 record in 35 appearances over two seasons in the USHL while holding a 2.73 goals against record and .902 save percentage. The Boston College commit was nearly perfect in USHL play this season with a 15-1-0-0 record after a 13-4-0-0 record in his first USHL season.

Knight recorded a 21-save shutout on March 1 in a game against the Madison Capitols and allowed one-or-fewer goals in eight of his 16 USHL appearances this season. In 19 appearances last season, Knight held opponents to two-or-fewer goals 11 times including four one-goal-allowed games. Eleven of his 13 wins in his rookie USHL season came during a stretch in which he won 11 of 12 games between December 30, 2017 and March 24, 2018.

The Avon Old Farms product finished his NTDP career with a 59-10-0-1 record in 78 appearances, including a 32-4-0-1 record this season. His 32 wins this season is tied with Thatcher Demko (2012-13) for most NTDP wins in a single season while his 27 wins last season is tied with Campbell (2008-09) for 7th. Knight also holds the career record with 59 career wins. The goaltender’s career .912 save percentage is tied with Al Montoya (2000-02) for 7th in NTDP history while his 2.36 goals against average this season was the 6th-best mark in NTDP history.

“When you’re in an NHL setting and you have to win four-out-of-seven games, he has the perfect mentality to do that. He’ll take an outing where it didn’t go perfect for him and adjust accordingly and not get too high on his good days and not get too low on his bad days. His bad days are few and far between. You’re talking about a world-class goaltender, kind of a freak in terms of his athleticism – 6-foot-2 – who moves so crisply and explosively in his crease. He knows his angles, he has the ability to make an impossible save look routine. The way Spencer’s built – mentally and physically – he has a chance to be a generational goaltender.”
- John Wroblewski, NTDP U18 Head Coach on Spencer Knight

NHL player comparable: Tom Barrasso
“Everyone wants to go with Carey Price but with the way (Knight) plays the puck, you almost have to go back to Tom Barrasso, with his steadiness. He was another guy labeled as a prodigy, in the NHL at 18 (years old), tons of expectations. They have prowess playing the puck and their confidence is very similar.”
- John Wroblewski via The Athletic

“Spencer Knight is, hands down, the top goalie prospect in the 2019 Draft. … Yes, his athleticism is high end, and he is extremely technically refined. He telescopes well and challenges shooters when the situation calls for it. He has lateral explosiveness but is always under control. He limits second chances and is a gifted puck handler for a goalie. … Knight played in less than 40 games this year, and rarely faced a lot of rubber.”
– McKeen’s Draft Guide 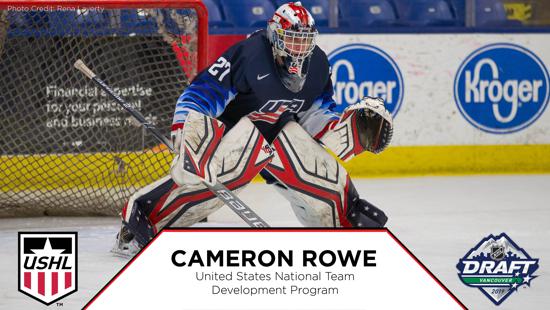 Wilmette, Ill. native Rowe heads to the NHL Draft as NHL Central Scouting’s #4 North American goaltender after collecting a 38-26-0-1 record in two seasons with the NTDP.

The University of North Dakota commit finished this season’s NTDP schedule with a 16-10-0-1 record in 35 games after collecting a 22-16-0-0 record in 43 appearances his rookie campaign.

Rowe finished his USHL career with a 17-14-1-1 record, 3.78 goals against average and .875 save percentage in 39 career appearances including an 8-2-1-1 record this season in 16 games. The Team Illinois product held opponents to two-or-fewer goals in eight of his 16 appearances this season, including a 36-save (38 shots against) performance against the Central Illinois Flying Aces on November 23, 2018 in a hard-fought 2-1 loss.

Last season in the USHL, Rowe produced a 9-12-0-0 record in 23 appearances but looked his best when he combined to allow just one goal on 52 combined shots over 88:32 played in a pair of performances in late January.

“It’s unbelievable how he carries himself in a practice. He’s the most competitive goalie I’ve ever seen. He’s off the charts that way. There’s no off-switch.”
- John Wroblewski, NTDP U18 Head Coach on Cam Rowe

BY THE NUMBERS:
200 – United States National Team Development Program players taken all-time in the NHL Draft
32 – Amount of NHL teams that have drafted NTDP
21 – Most NTDP players taken in one Draft (2016)
9 – Years in a row at least one Team USA player has been taken in the NHL Draft
1 – Highest total pick a Team USA player has been selected at (2016, Auston Matthews; 2000, Rick DiPietro)