USHL Announces 2019 Executive of the Year 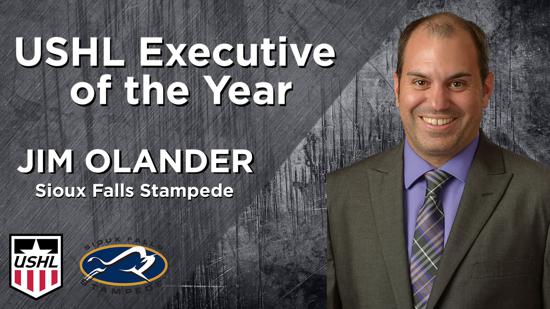 The USHL announced Thursday Sioux Falls Stampede President Jim Olander was named David Tyler USHL Executive of the Year. The award was determined by a vote of senior management from USHL Member Clubs.

Olander was promoted to President of the Stampede ahead of the 2018-19 season, his 16th with the organization, which saw Sioux Falls win its third Clark Cup Championship. In his role as President, Olander oversees the day-to-day operations of the Stampede who drew more than 190,000 fans for the fifth-consecutive season and led the USHL in attendance for the sixth-straight season.

This is the second time Sioux Falls has been awarded the David Tyler USHL Executive of the Year award (Tom Garrity, 2014-15) and comes on the team’s 20th anniversary. Olander spearheaded the 20th anniversary season, which included the highest gross revenue in the team’s history.

The Sioux Falls Stampede hosted its 12th annual Wiener Dog Races in February, a promotion Olander helped make a success by changing the team name to the Sioux Falls Fighting Wiener Dogs. The change, and custom jersey, was featured on ESPN. The 2019 Wiener Dog Races provided the fifth-consecutive sellout for the promotion (10,678) and set a team record for highest single-game ticket revenue.

Olander has had a hand in helping grow promotional nights such as Pink in the Rink, Military Appreciation Night, and Special Olympics Night, which all drew more than 8,000 fans this season. Throughout the season, Olander and the Stampede raised more than $100,000 for various local charities including the Scheels Ice Plex, Sioux Falls Youth Hockey Association, American Cancer Society, Salvation Army, Dakota Dachshund Rescue, Special Olympics South Dakota and Warriors Never Give Up.

The Stampede Facebook (facebook.com/sfstampede) and Twitter (@sfstampede) pages had an increase of 25 percent and now have more than 15,000 likes and 10,000 followers, respectively.

Olander, a New Brighton, Min. native, was hired in 2003 as the Broadcast and Communications Manager and was promoted to Executive Vice President in 2013. Olander still serves as the “Voice of the Stampede” and called his 1,000th career Stampede game on February 12.