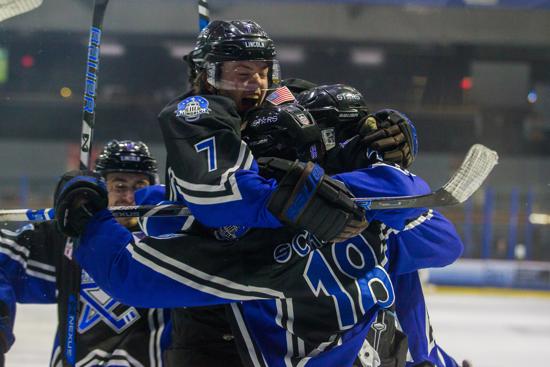 “There’s a lot of new faces on our team, which is a result of the season that we had last year,” said Lincoln Stars General Manager and Head Coach Cody Chupp. “We’re excited to prove ourselves in this league again.”

Many new faces doesn’t mean a lack of experience on the 2019-20 Stars roster, however. The team’s initial 30-man preseason roster featured 23 players with USHL experience including 13 who suited up for the Stars last season.

Among the players to watch in the Stars lineup this season are forwards Josh Lopina, Matthew Barbolini, Brock Bremer and Travis Treloar.

Lopina, a University of Massachusetts commit, played in all 62 games for the Stars last season and registered 28 points (12-16-28). The former Chicago Mission forward was ranked a C skater on both NHL Central Scouting’s Preliminary and Players to Watch lists at the beginning of last season. Lopina notched a pair of goals on January 20, his second multi-goal game of the season, in a three-point (2-1-3) night that kicked off a season-high four-game point streak (2-5-7).

Barbolini also played in Lincoln last season, appearing in 55 games and picking up 22 points (7-15-22). The Williamsville, N.Y. native registered four points (1-3-4), a USHL career high, on January 26 in a 7-3 road win over the Green Bay Gamblers. The impressive four-point night was only outdone by Bremer, who recorded a hat trick (3-1-4). Barbolini and Bremer assisted on all four of each other’s goals that night. Bremer, a University of Nebraska-Omaha commit, joined the Stars midway through the season and picked up 16 points (9-7-16) in 29 games in Lincoln after picking up 18 points (7-11-18) in 30 games with the Muskegon Lumberjacks.

Treloar, a Western Michigan University commit, joins the Stars after a Clark Cup Final run with the Chicago Steel. The Swedish forward recorded an assist while appearing in 10 playoff games for the Steel after registering 30 points (14-16-30) in 59 regular season appearances. Treloar got off to a blazing start with Chicago, scoring a goal in five of his first 10 games (6-1-7) and registering a point in 10 of the team’s first 17 games. In a three-game weekend in Youngstown, Ohio midway through the season, Treloar registered a trio of multi-point games (1-6-7) with a pair of assists in all three appearances.

The Stars will look to defensemen Jordan Power and Jake Boltmann to sure up the defensive side of their game this season. Power, a St. Lawrence University commit, played in 58 games for Lincoln last season and registered 18 points (3-15-18), which finished tied for third amongst Stars blueliners in 2018-19. The Ottawa, Ontario native picked up a multi-assist game on January 26 that kicked off a four-game point streak (1-4-5) and a stretch of seeing himself on the scoresheet in five of six games. Boltmann, a University of Minnesota commit, appeared in a combined 12 games in the last two seasons with the Central Illinois Flying Aces. In that time, the Edina, Minnesota native has also appeared in 49 games for Edina High where he’s registered 28 points (6-22-28). Boltmann earned a spot on the USHS All-USA Hockey Second Team last season and is eligible for the 2020 NHL Draft.

“Any time you go through a season like we did last year, you learn a lot of things,” said Chupp. “I think it’s important that the lessons we learned, a lot of times they were what not to do, but it’s an exciting opportunity to get back to the culture and tradition that surrounds the Lincoln Stars. A lot of times, culture is dependent on the group you have, from the coaching staff down to the players. But the nice thing for us is that the fanbase here expects a certain quality or brand of hockey that the Stars play. Our goal this year is to start to get back to making the Ice Box an extremely tough place to play, to have a home-ice advantage. For those fans that have been around the team for a long, long time to start to recognize those pieces that they’ve seen in the past which is a hard-working man’s brand of hockey. It’s easy to say that, but we also want to play with skill and play with the puck at the same time. We want to allow our players to have some creativity, but the working man’s attitude has to be a key component of everything we do on a daily basis. It’s an exciting time; I was very pleased with our camp in June. It’s been a long couple of months waiting for these guys to get into town and get excited. We’re going to make sure that we’re hammering on that identity.”

Be sure to check out the Stars full-season schedule as well as their promotional schedule, which includes Pink Weekend (October 18-19), Military Appreciation (November 9), Faith & Family Night (December 1), Pucks & Paws (March 14), Agriculture Night (April 3) and Family Nights on November 1 and April 1.