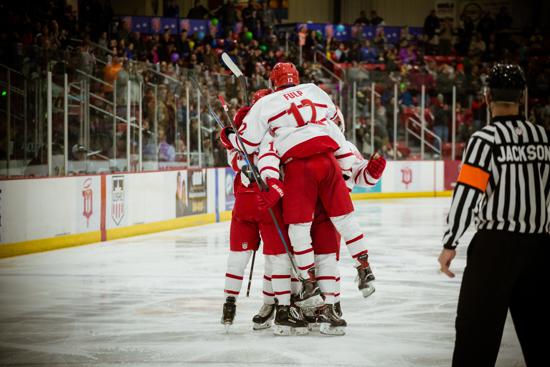 The 2019-20 season will be a special one for the Dubuque Fighting Saints regardless of the results as it is the 10th anniversary season since the team’s return to Dubuque. But the team has a reputation to uphold. In all nine seasons since their return to the USHL, the Fighting Saints have not only made the Clark Cup Playoffs, but have won at least one series every year. Dubuque has accounted for two Clark Cups and one Anderson Cup in those nine seasons.

“We are very excited to start this upcoming USHL season,” said Dubuque Fighting Saints Head Coach Oliver David. “Right now, our goal is to get better every day and develop each and every player so that we can put a competitive team out on the ice every night this season.”

The Fighting Saints return a lot of their offensive star power from last season and also add the 2018 USHL Phase II number one overall pick, forward Stephen Halliday. The University of North Dakota commit joins the Fighting Saints after recording 34 points (10-24-34) in 55 games with the Central Illinois Flying Aces. The Glenwood, Md. native had a USHL career-high six-game point streak (2-7-9) from December 9 to January 5 as well as a pair of four-game point streaks. Halliday’s eight multi-point games throughout his rookie season was highlighted by a three-assist night on November 21 at the Green Bay Gamblers. The former Toronto Malboros skater finished his first season strong with four points (1-3-4) in the final three games.

“We are happy to return some of our key players from last season,” said Dubuque Fighting Saints General Manager Kalle Larsson. “While mixing that USHL-experience with some new exciting faces, we aim to be a competitive team that plays an exciting brand of hockey.” 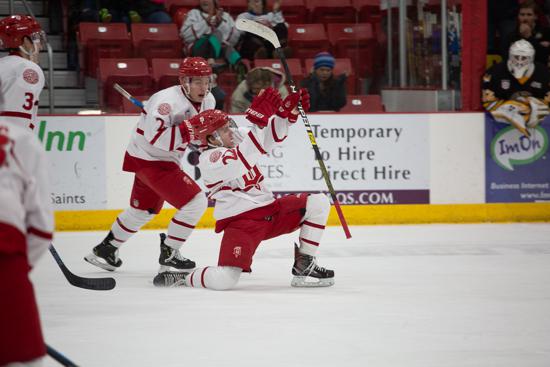 Gaber returns to Dubuque after a 50-point (22-28-50) first year in the league. The University of North Dakota commit came into the league firing on all cylinders with a goal in each of his first two games and points in five of his first six (3-6-9), including a three-game point streak with multiple assists in each game. The Gilbert Plains, MB native had a career-best four-assist game on October 27 against the NTDP, but a three-point night (2-1-3) on March 1 kicked off his career-high nine game point streak (7-7-14) that carried through March 23. Gaber finished the season as hot as he started it with points in 13 of his final 15 games (9-10-19). 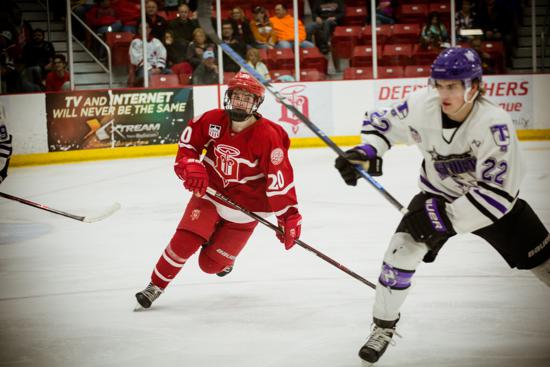 Dylan and Ty Jackson return as the other forwards that were part of Dubuque’s dangerous top line with Gaber last season. The twins from Oakville, Ont. are both committed to Northeastern University and formerly played youth hockey for the Mississauga Rebels. They even won USHL Co-Forward of the Week honors on October 15, 2018 and both represented the Fighting Saints at the 2019 USHL/NHL Top Prospects Game.

Dylan had 44 points (13-31-44) in 62 games last season and also kicked in four points (2-2-4) in six playoff games. The elder sibling came up large in the Fighting Saints’ final win of the postseason with a three-point night (1-2-3) on April 23 to avoid elimination with a 5-1 win over the Muskegon Lumberjacks. Dylan had 12 multi-point games last season with four of them, including both three-point games and the only four-point game, coming in the first month of the season. He also registered three different four-game point streaks.

The Fighting Saints will have a new face in the net this season as Erik Portillo assumes the responsibility of backstopping the offense-heavy Dubuque roster. The Swedish netminder is a Buffalo Sabres prospect (2019, Rd. 3, 67 overall) after posting the best goals against average (1.99) and save percentage (.931) in the SuperElit league with Frolunda last season. The University of Michigan commit has also represented Sweden at international tournaments the past three years.

Be sure to check out the Fighting Saints full-season schedule as well as their website for a promotional schedule, which includes Military Appreciation and Hockey For All (February).