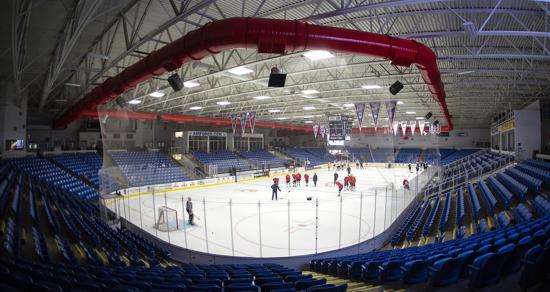 The United States Hockey League, in conjunction with USA Hockey and the NHL, announced Wednesday the 2020 BioSteel All-American Game which will be held at 7 p.m. ET on Monday, January 20, 2020 at USA Hockey Arena in Plymouth, Mich.

“Our partnership with USA Hockey and the NHL has never been stronger, and working together on this game to celebrate our top players is something we’re very much looking forward to,” said USHL President and Commissioner Tom Garrity. “Hockey in our country continues to grow and get stronger and we’re proud to be part of those efforts each and every day.”

New this season, the USA Hockey National Team Development Program (NTDP) Under-18 team, which is one of the USHL’s 16 Member Clubs and plays a full 62-game schedule in the USHL, will square off against the top NHL Draft-eligible players from the USHL, the only Tier I junior league in the United States. This new event is a combination of two previous events, the USHL/NHL Top Prospects Game and the All-American Game hosted by USA Hockey. The event aims to be a showcase of the best NHL Draft-eligible players currently playing in the United States and is a great event for NHL scouts to witness the best talent the United States has to offer before the 2020 NHL Draft in June.

“We look forward to bringing the BioSteel All-American Game to USA Hockey Arena and we’re particularly excited to have the close partnership of the USHL and NHL in putting on this game,” said USA Hockey Assistant Executive Director John Vanbiesbrouck. “With our new format, and moving the event from September to January, we think the game will be extremely competitive and a terrific showcase of our top players. To have the future American stars of the NHL all on a single sheet of ice is really unique and something fans will enjoy.”

In the seven prior All-American games, 287 players have participated with 243 (84.7 percent) having ties to the USHL. Of the 243 with USHL ties, 161 were playing in the league at the time of the game and 82 were either league alumni or had not yet played in the USHL. Twelve current USHL players previously played in the All-American Game, including eight in 2018 (Braden Doyle – DBQ, Ryan Drkulec – WAT, Aaron Huglen – FGO, Mike Koster – TC, Garrett Pinoniemi – SF, John Prokop – MUS, Cameron Rowe – DM, Grant Silianoff – CR) and four in 2017 (Jack Jensen – OMA, Ryan O’Reilly – GB, Jack Randl – OMA, Adam Samuelsson – SC). Of the 188 total All-American alumni selected in the NHL Draft, 162 are USHL alumni, with all 31 NHL teams having selected at least one USHL alumni.

Final rosters, coaches, and on-ice officials for the BioSteel All-American Game will be named at a later date. For more information about the game, click HERE.

Tickets for the BioSteel All-American Game will go on sale to the general public at 10 a.m. ET on October 25 at USA Hockey Arena’s box office or online HERE.