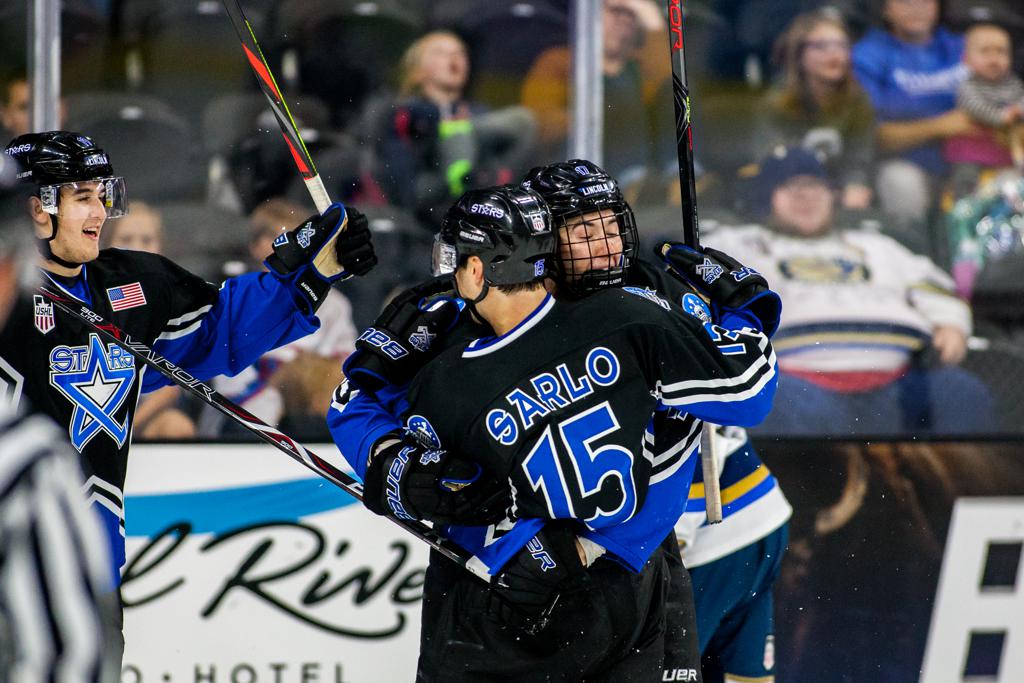 Just 10 games into the new season, the Lincoln Stars have amassed half the wins it took all of the 2018-19 season to collect. As October ends, the Stars are atop of the Western Conference, a far cry from the 12-42-4-4 finish last season.

With a 6-2-1-1 record and 14 points, the Stars are tied with the Waterloo Black Hawks for the best record in the Western Conference. The turn-around is thanks to a culture the team spent the summer and preseason developing, as well as Head Coach Cody Chupp’s expertise behind the bench.

“Culture is what pushes you through adversity throughout the course of the season,” said Chupp. “As we put our team together, as we made those final decisions, culture was a main component of those decisions we made. Finding the group that would not only buy in, but drive that culture and willingness to drive and compete every night was key.” 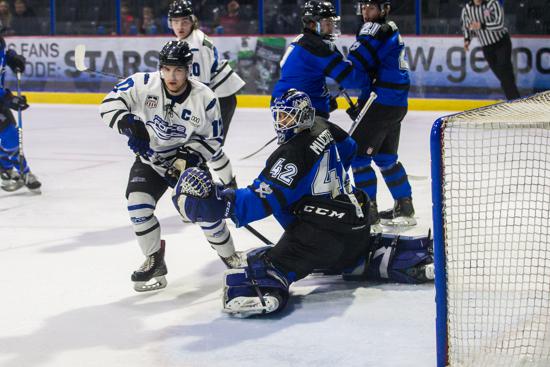 This season is Chupp’s third behind the bench for the two-time Clark Cup Champions. After splitting four preseason games, the Stars turned their focus to the 2019 DICK’S Sporting Goods USHL Fall Classic. Puck luck was not on Lincoln’s side in the season opener, falling 3-0 to the Fargo Force as a handful of shots rang off the pipe and crossbar surrounding netminder Cole Brady, who turned aside all 36 Stars shots he saw. Chupp said the message to the team was clear after the game, stick with the plan that created the opportunities and the results would follow.

“It’s tough early in the season to play well and not get the results you want,” said Chupp. “The big thing for me was our response the second night. We followed it up with a performance that was very similar but the only difference for us was the ability to finish. I liked our resiliency.”

That resiliency resulted in a 4-2 win the next night, kicking off a four-game win streak. The second win of the streak showed even more resiliency as Chupp’s team fought back from a 3-1 deficit midway through the game in front of a Denny Sanford PREMIER Crowd of more than 8,000 celebrating the banner raising for their Sioux Falls Stampede’s 2019 Clark Cup Championship. Lincoln left Sioux Falls with a 6-4 win and carried the momentum to a pair of victories the next weekend while outscoring opponents 13-5. 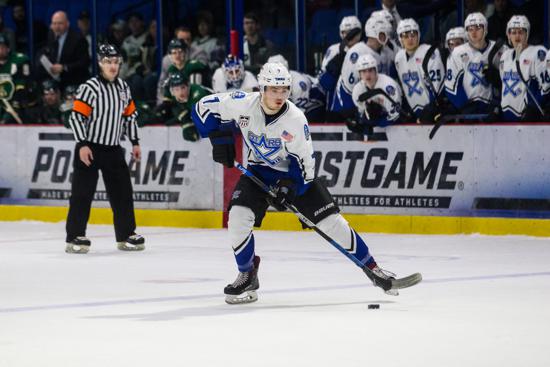 The final game of the win streak featured a hat trick from forward Josh Groll, who is one of six Stars forwards with 10-or-more points through the first 10 games. Groll (7-4-11) is joined in the double-digit point total by teammates Josh Lopina (4-7-11), Matthew Barbolini (7-3-10), Brock Bremer (2-8-10), Travis Treloar (4-6-11), and Christian Sarlo (3-7-10). The six Lincoln forwards make up 21 percent of the players in the USHL with 10-or-more points through October, the most of any team. The other thing that ties the group together? They’re all second-year players in the league.

“Early in the year you want your second-year guys to lead the way because they’ve been through it,” said Chupp. “We’re unique in the sense that we have quite a few second-year guys, but not all of them were here last year. The guys who were here last year have a fire in their belly and don’t want to repeat what they’ve been through, and we have some guys who are in situations where they can take advantage of more opportunities in a bigger role.”

Lopina and Barbolini each spent the whole season with Lincoln last year while Bremer finished the year with the Stars after a midseason acquisition from the Muskegon Lumberjacks. Groll, Treloar and Sarlo joined the team from the Chicago Steel in the offseason after a run to the Clark Cup Final.

The Stars have turned to Jordan Power – who was named Captain last week – for stability on the back end. He is currently third among USHL defensemen with nine points (0-9-9) this season. Forward Matthew Miller also has nine points (4-5-9), and is one of three Alternate Captains alongside Lopina and Sarlo.

“We have a locker room full of guys who could be wearing letters and are great leaders, and it’s those guys who have fueled our start,” said Chupp.

This is the first season Chupp has had a roster comprised completely of players he brought into the organization, and he credits his staff with helping to build the team currently in place.

“The guys we have here, that we got through trade or the Draft, it was a group effort,” said Chupp. “Having everybody on the staff seeing eye-to-eye on the type of person and player we want to bring into our organization is a key component of that. There’s a very clear picture of who we want in this organization, the way we want to play, and the culture we want to create. We have productive conversations about guys on a daily basis that revolve mostly around that culture and the type of team we want to be and who can fuel that. Chris Michael [Associate Head Coach] pushes and challenges me on a daily basis. He is extremely knowledgeable and experienced and demands the best from himself and those around him every day.” 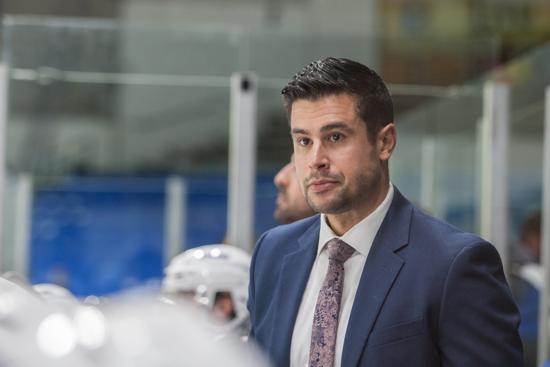 Despite leading his team to an impressive start this season, coaching wasn’t always in the cards for the 34-year old bench boss. Chupp was focused on playing the game in his early days, splitting time with the Tri-City Storm and Waterloo Black Hawks in his two USHL seasons before a four-year career at Ferris State University. The Big Rapids, Mich. native was named Alternate Captain his sophomore year before donning the “C” for his junior and senior campaigns.

During his two years as captain, Chupp led his team to a similar turn-around, flipping a 12-19-7 record his junior year into a 21-13-6 record his final season. 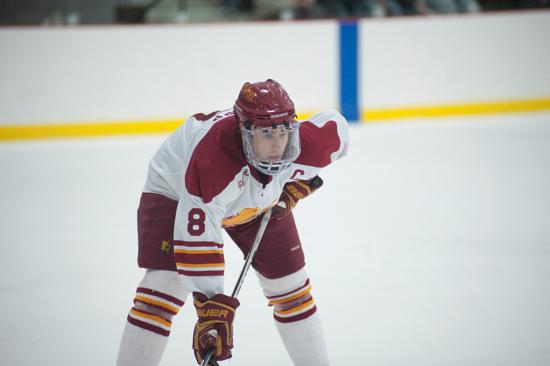 Chupp went on to play three seasons in the American Hockey League (AHL) and, despite not wanting to coach at the time, picked up valuable coaching lessons from Glen Gulutzan with the Texas Stars and John Hynes with the Wilkes-Barre/Scranton Penguins. Hynes is currently in his fifth year as the head coach of the New Jersey Devils. Gulutzan is currently serving as an Assistant Coach with the Edmonton Oilers and has been an NHL coach since 2011, including two stints as Head Coach (Dallas Stars – 2011-13, Calgary Flames – 2016-18).

Although he has taken something from all the coaches he’s played under, his experience with Bob Daniels at Ferris State University was incredibly rewarding.

“Coach Daniels is someone I’ve known since I was three or four years old and he came to Ferris,” said Chupp. “I learned a lot about how much he cares about his players and how invested he is in the players, the school, and the community. That’s the thing I love most about Coach Daniels.”

Chupp’s foray into coaching began as an Assistant at Utica College the year after his playing career ended. Admittingly, Chupp wasn’t fully into the idea of coaching at first, but as soon as he arrived on campus he fell in love with the development side and the opportunity to work with players every single day. Chupp followed up his year in Utica with three seasons behind the bench of the Green Bay Gamblers as an Assistant alongside Pat Mikesch, who Chupp credits for giving him a shot as a young coach.

“He gave me, as a young coach, a lot of responsibility and trust,” said Chupp. “He allowed me to learn coaching through doing. It was with him I learned the day-to-day of being a coach in the USHL.”

Despite being focused on his playing career and not thinking about coaching in the future, Chupp’s former teammate Zach Redmond isn’t surprised his former Captain is finding success behind the bench.

“I can see why [Chupp has found success], he’s always been a lead by example guy,” said Redmond. “He was a couple years older than me so I had a great example to follow when I got to Ferris. There weren’t a lot of ups and downs with him. He showed up to the rink every day and was a good example for that age in college. You’re young and looking for someone to follow and he was that for a lot of guys. Whether it was a work out, practice, or class, he was always on time and giving his best effort. He didn’t command the following, but it happened naturally with him. He was a guy that was easy to look to as a model. He’s a smart guy on the ice, and with x’s and o’s and knew how to play and talk to people. It’s a job that I’m not surprised he has and I’m happy for him working his way up to a position like that so quickly.”

Redmond is currently a defenseman with the Rochester Americans (AHL) and was a teammate of Chupp’s from 2007-10 at Ferris State University and played against Chupp in both the USHL (2005-06) and AHL (2010-12). 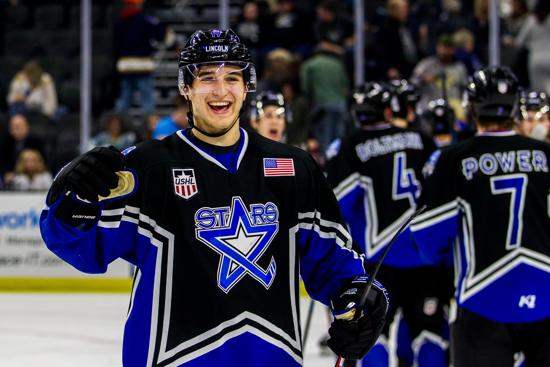 It’s only 10 games into the season, and things can change in a flash in the rapid-fire 62-game season, but the early success of the Stars seems to be a signal they’ll be a contender in the Western Conference this season. The team is back in action this weekend with a games Friday (vs. Cedar Rapids RoughRiders) and Saturday (at Des Moines Buccaneers). Lincoln has picked up a point in each of the last three games (1-0-1-1), with both extra time losses coming after last-minute tying goals from the Stars to force overtime (16 seconds remaining vs. Youngstown on October 19 and 12 seconds remaining at Sioux City on October 25). This has shown Chupp his team has the fight they’ll need in April and May in the chase for a third Clark Cup.

"What we take from those games is not being willing to quit," said Chupp. "Those are two games we found a way to get a point and probably one more point than we deserved. They were by far not our best effort or best games as a group, but to compete right to the end was a huge uplifting thing. Good teams find a way to maximize what they can out of a situation. it shows a lot of resiliency, and that's what you need in the playoffs. The refusal to quit is huge."