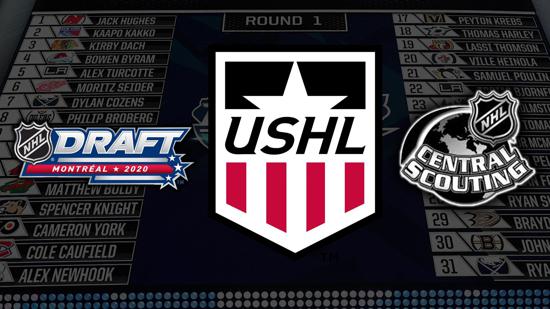 NHL Central Scouting announced its updated player rankings Monday ahead of the 2020 NHL Draft held in Montreal from June 26-27 next summer. The list identifies players using an A, B and C-ranking system to evaluate potential upcoming NHL Draft selections. Seven total players with ties to the United States Hockey League (USHL) improved their stock, including a trio of previously unranked players. The USHL has 90 players in the latest NHL Central Scouting rankings – which leads all leagues evaluated – including 70 who have laced their skates in the league this season.

Among those who jumped up in the standings was USA Hockey National Team Development Program (NTDP) forward Luke Tuch, who improved to an A-ranked skater. Tuch, a Boston University commit, joins NTDP teammates Jake Sanderson (defenseman, University of North Dakota) and Ty Smilanic (forward) as the USHL’s A-ranked skaters. An A-ranking indicates a potential 1st Round candidate.

Lincoln Stars forward Travis Treloar headlined a trio of players with USHL ties to find their name on the updated rankings after not being included in October’s initial projections. The Western Michigan University commit has 15 points (5-10-15) in 14 games this season. His point total is good for third on the Lincoln Stars while being tied for 10th among all USHL skaters. Treloar is in his second full season in the USHL and is on pace to shatter his totals for goals (14), assists (16) and points (30) from last season.

Alongside Treloar in making a jump into the NHL Central Scouting rankings were USHL alumni Michael Vorlicky (Madison Capitols, 2018-19) and Ilya Usau (Central Illinois Flying Aces, 2017-18). Vorlicky is currently in his freshman season at University of Wisconsin where the defenseman has registered an assist in nine games this season as the Badgers are 5-5-0 and ranked 15th in the nation. The C-ranking indicates a potential 4th, 5th or 6th Round selection.

The USHL had 55 players selected at the 2019 NHL Draft this past summer, including a league-record 52 active players. Forty-or-more players from the USHL have been selected in eight consecutive NHL Drafts. USHL alumni account for more than 800 of the NCAA Division I players for the 2019-20 season, along with 74 alumni among the coaching ranks in Division I hockey.