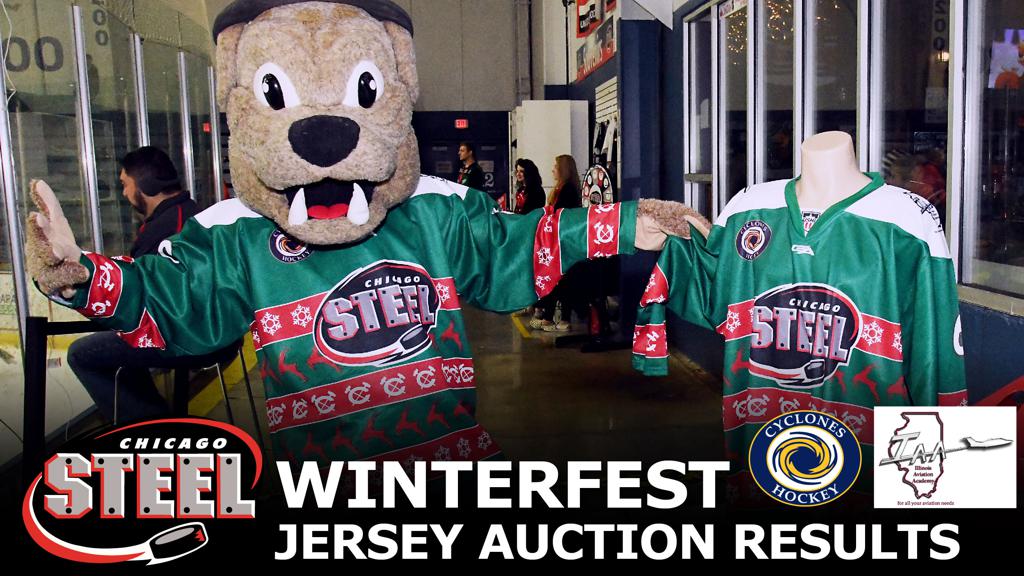 The Steel wore limited edition, red and green striped ugly sweater jerseys in a 3-1 win against the Tri-City Storm on Saturday. The home crowd, which was the largest of the season to date for Chicago, bid on the game-worn jerseys with forward Tyler Carpenter and goaltender Victor Ostman sharing the honor of highest bids at $500 each.

"Illinois Aviation Academy has been a long-time supporter of the Steel, the Boys and Girl Scouts of America and Tuskegee NEXT.  We were proud to continue the fight against obesity, negativity and apathy by partnering with the Cyclones for this event.  There is nothing better than healthy, happy kids!  Fun games, gifts, raffles and an exciting Steel victory made the night memorable for all in attendance,” said Werderich.

Cyclones President Tom Baginski provided more detail for the use of funds raised by the ugly sweater jersey auction.

“The Cyclones Amateur Hockey Association would like to thank the Chicago Steel, the Werderich family and Illinois Aviation Academy for the overwhelming generosity displayed at this past weekend’s Xmas jersey auction,” said Baginski. “Proceeds from the auction will be used for financial aid to players who struggle to afford hockey and the Cyclones Scholarship fund. Thanks for making our Winterfest fundraiser a huge success!”

In addition to the in-game, holiday-themed entertainment, the crowd enjoyed three first-period goals from the home team on Saturday, including defenseman Ryan Ufko’s first-career USHL marker. The Steel kept the Storm at bay and capped the night with a 3-1 win, the fifth victory in a row for Chicago.

Chicago Steel Team President Dan Lehv expressed the organization’s appreciation for all who participated to make the special evening a resounding success.

“The ugly sweaters were a big hit among our fans as there were several bidding wars to leave the rink with a jersey while supporting a great cause,” said Lehv.  “We’d like to thank Illinois Aviation Academy for their sponsorship of the event, and to everyone who placed a bid.”