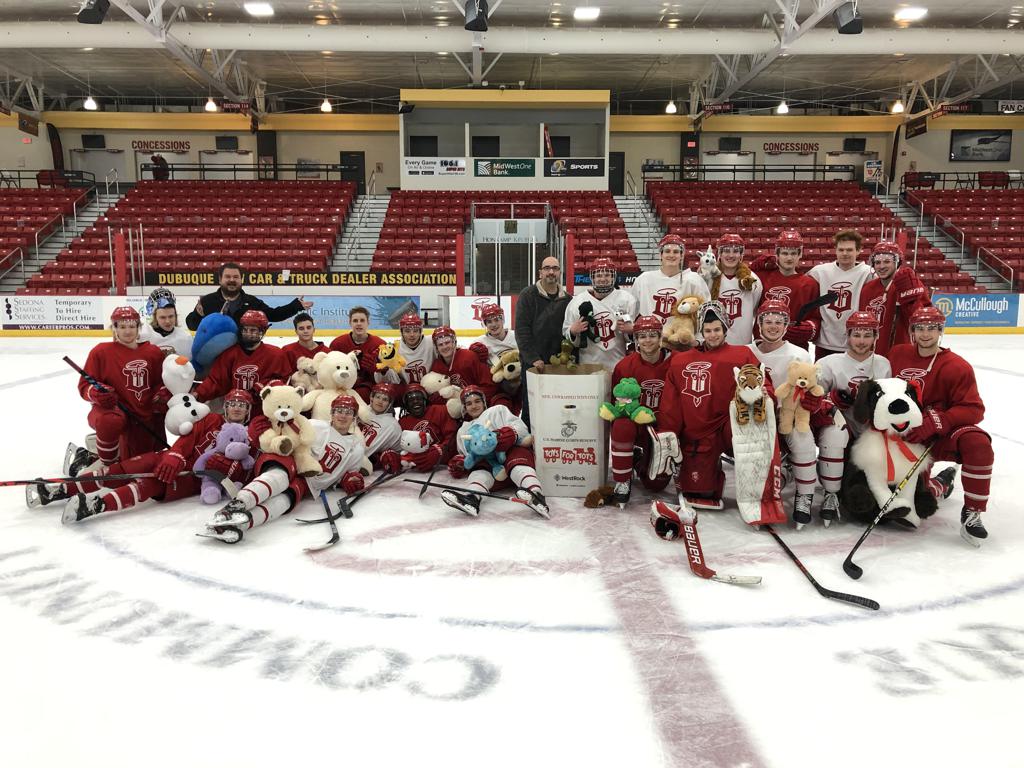 DUBUQUE, Iowa — The Dubuque Fighting Saints enjoyed a successful 10th annual Teddy Bear Toss night on Saturday, December 7th. Dubuque took on the Muskegon Lumberjacks and thanks to a Dylan Jackson goal, were able to send the stuffed animals flying on to the ice midway through the second period. The Saints collected 1,296 stuffed animals during Teddy Bear Toss night, making it one of the most successful in team history. ImOn Communications was the sponsor of the night and a big reason it was such a big success.

“This is one of our favorite events that our company participates in each year,” said Justin Stinson Vice President/General Manager of ImOn Communications. “Not only is the Teddy Bear Toss fun and exciting for fans of the Fighting Saints but has a huge impact for kids in the area to make their Christmas even brighter. Our partnership with the Saints and the great people at Toys for Tots help make this a night to remember.”

The crowd of just over 2,500 at Mystique Community Ice Center pelted the ice with bears for a little over three minutes after the goal was scored by Jackson.

“There is one kind of toy that we have not had to purchase for Marine Corps Toys For Tots in the Dubuque area for a number of years and those are plush toys,” said Bryce Parks with Toys for Tots. “The massive amount of teddy bears that come in each season from the Dubuque Fighting Saints Teddy Bear Toss for Toys For Tots is enough to fully serve that need in the tri-states annually. And when you are serving 5,000 kids in 4 counties in the tri-states, that's no small feat. We can focus our dollars elsewhere and know that the little ones will always have all the cuddly toys they'll ever need. Thank you to the Saints and ImOn for making it possible again in 2019.”

The toys will be collected by Bryce and Toys for Tots and distributed around the area to children and families in need. The total number of bears will be released at a later date once they have been sorted in the Toys for Tots warehouse.