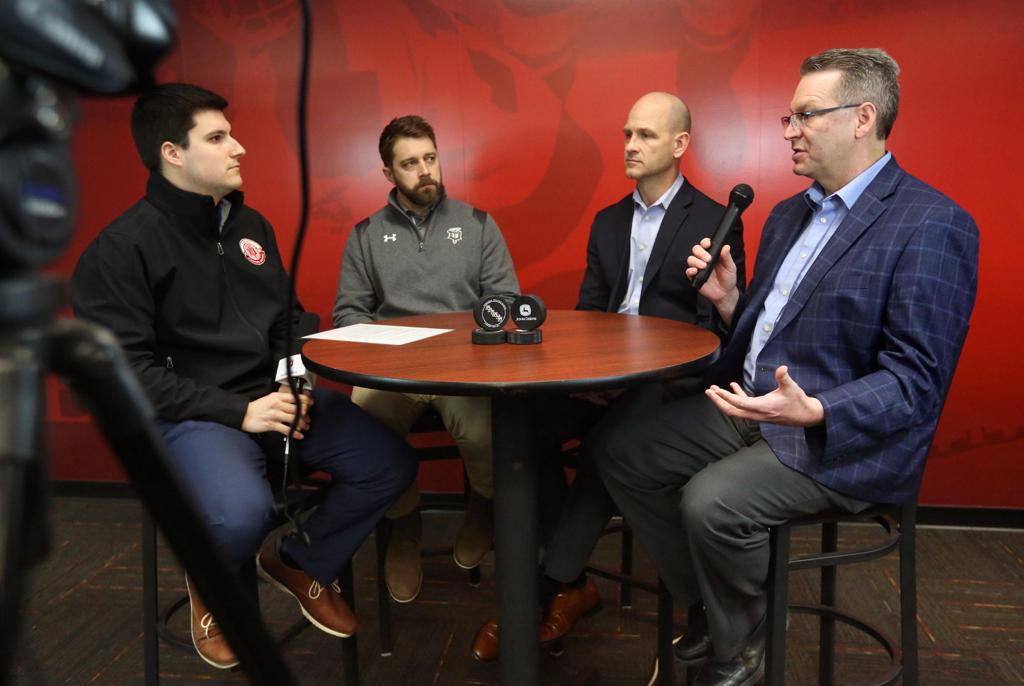 Oliver David looks no further than the Dubuque Fighting Saints’ own locker room to explain the importance of diversity and inclusion to a community.

Each day, the Saints head coach works with players from 12 different states — including the non-traditional hockey markets of Arizona, California, Florida, Indiana, Maryland and Tennessee — as well as two players from Sweden and three from Canada. The team’s ownership group and front-office staff feature similar diversity in background.

“Being involved in an international sport is one of the reasons I enjoy coaching, to be honest,” David said during a round table discussion on the Saints’ ‘Hockey for All’ initiative. “I like the adventure aspect of it being an international community and getting to know about cultures from all over the world and learning how to communicate and co-mingle. It’s right in line with the things I value in life, and I’m glad to be a part of the club leading the charge.

“Within our team, we have a substantial amount of diversity, and to have those cultures mix has been extraordinary. The learning our players receive is a microcosm of what it could be like out in the community. Imagine being from California and never having met a person from, say, a small fishing village in Sweden and learning all about that through hockey. Those are the things that excite me and excite our guys.”

Last season, the Saints made history by becoming the first junior hockey team in North America to promote a diversity and inclusion initiative. The month-long “Hockey for All” celebration erases all labels and simply encourages people of any background to enjoy the sport.

In addition to raising nearly $14,000 for the local United Way, the campaign received a significant national boost when ESPN anchor John Buccigross tweeted about it to his more than 400,000 followers. The Saints received positive feedback from fans throughout the United States Hockey League.

The Saints again joined forces with John Deere Dubuque Works and the United Way to promote “Hockey for All,” which takes place throughout February. The celebration culminates with the “Hockey for All” game on Feb. 29, when the Saints host Sioux Falls at Mystique Community Ice Center.

“We all have a vested interest in making our community a more inclusive community and one that people really find attractive, and this is just one simple way, but we think a pretty impactful way, of spreading the message of inclusion to our community,” John Deere Dubuque Works general manager Mark Dickson said. “We’ve often said, we can do a lot within our factory in our operations, but only a certain amount of our employees’ time each day is spent at work. The rest of it is in our community, so we needed to get involved in the community as well.

“This seemed like a nice complement to a lot of the things we’ve been embracing. We’re trying to make our overall organization more engaged, in terms of being inclusive and being a champion of diversity. The community needs that as well, so when we came upon this opportunity, it seemed like a nice way to bridge out.”

Dickson expanded that bridge to Dubuque Community School District superintendent Stan Rheingans. Students in Dubuque represent the most diverse group in the community, and the “Hockey for All” initiative fits perfectly into the curriculum.

“We want to make sure all of our students, regardless of their background, feel welcome in our school district,” Rheingans said. “We spend a lot of time with our students, building relationships with their families and sharing the message that this isn’t just a during-the-school-day kind of thing. This is a community that’s open to including everybody in what’s happening here. Sports is a great outlet for that.”

Dickson appreciated the way the Saints players embraced the “Hockey for All” initiative last season. On several occasions, the players visited organizations aided by the United Way.

“It was cool that the players got to get out in the community and visit some of these non-profits and see what the challenges are,” Dickson said. “It was embracing diversity and inclusion in a different way, while also enriching those players.

“‘Hockey for All’ has a lot of neat connections. If we can expand this, and that’s why we pulled the school district into this, it further expands the impact.”

Dickson hopes the campaign can raise at least $20,000 this month. Jack Milewski, the voice of the Saints, said the team will air highlights of Wednesday’s round table throughout the month on its web site.