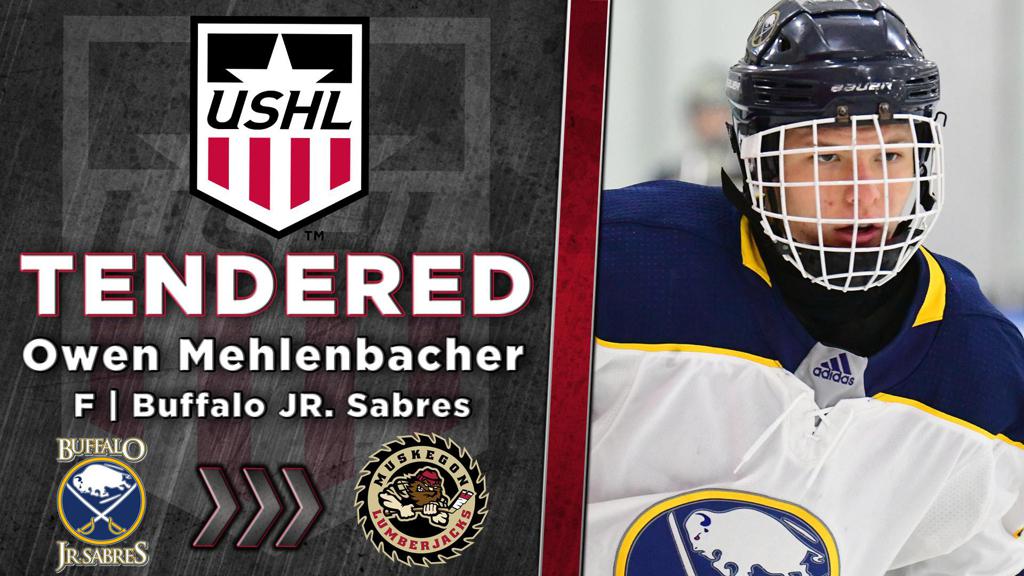 MUSKEGON, MI- The Muskegon Lumberjacks have announced the signing of forward Owen Mehlenbacher to a tender agreement ahead of the 2020-2021 USHL season.

The 6-foot-2, 180-pound forward from Fort Erie, Ontario, racked up 36 goals and 68 points in 69 games during the 2019-2020 season with the Buffalo Jr. Sabres organization. The 16-year-old becomes the seventh tender in Muskegon history, and the first from Canada.

Per the tender agreement, Lumberjacks fans will see Mehlenbacher in a minimum of 55% of Muskegon’s regular-season games in 2020-2021.

The big forward prides himself on playing a complete game.

“I’m a 200-foot forward,” said Mehlenbacher. “I always back-check and I have great offensive capabilities, I can score goals for the team, but I love working hard for my teammates.”

President of Hockey Operations Steve Lowe had this to say about the talented forward:

“We are super excited to bring a young man like Owen to our organization,” said Lowe. “He has a tremendous skill package of size, hockey smarts, and the ability to make game-breaking plays.”

“What attracted us to Owen even more was his drive to improve and his maturity as a young man. As we went through the process we also learned what a great job his parents Craig and Nicole have done raising Owen as a young man.”

Mehlenbacher had high praise for Lowe and the Muskegon staff as well.

“I talked to a couple of the staff members and I am very comfortable with them,” said Mehlenbacher. “Muskegon itself, the location is similar to my hometown- it’s right on the lake, it’s kinda similar in that perspective.”

“We are excited to add one of the top 04's in North America to our 2020-21 lineup,” said Hamilton. “Owen is a big body that fits our style; he’s a great skater with high end skill, his game is honest and he is committed to playing a full 200-foot game.”

Mehlenbacher said that Canada has not avoided the lockdowns that we’re experiencing here in the states, but he’s been staying busy.

“I have a personal gym in my basement with a bike, and I’ve been riding that every day. Just going outside, playing some basketball, shooting some pucks, and spending time with family.”

What everyone can agree on is that despite the way the 2019-2020 season ended, there is excitement surrounding the addition of Mehlenbacher and the upcoming season.

“I’m excited about the atmosphere,” said Mehlenbacher. “I’ve heard from a lot of people that it’s a great barn to play in and I can’t wait to get started.”

“Owen plans to play college hockey and chose the USHL and Muskegon to showcase and grow his skill set,” said Hamilton. “We as a staff couldn't be more excited.”

“We couldn’t be more excited to add a quality person like Mehlenbacher to the Jacks organization,” said Lowe.