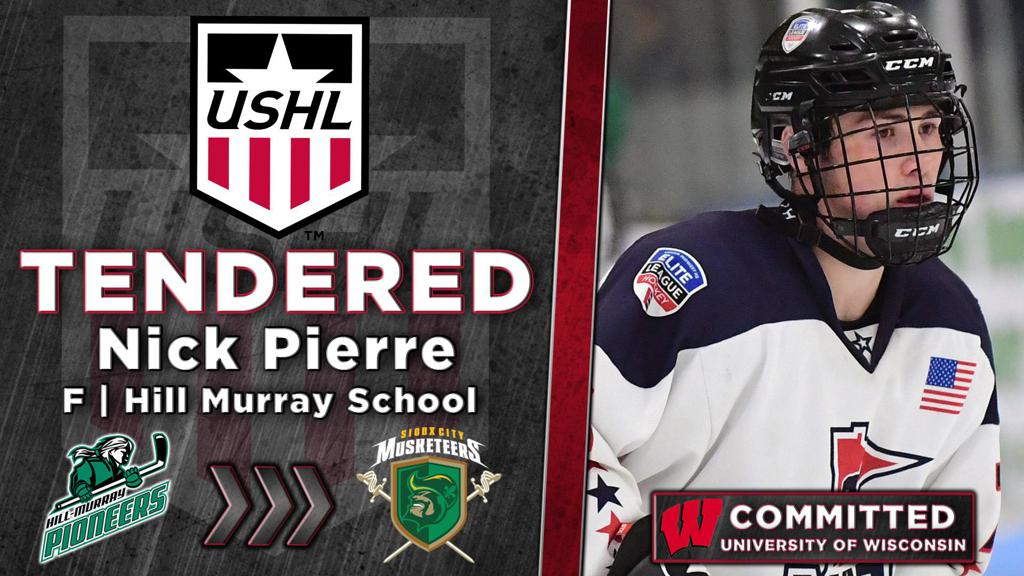 SIOUX CITY, Ia.- The Sioux City Musketeers announced Thursday the signing of forward Nick Pierre from Hill-Murray High School in Minnesota to a USHL tender agreement for the 2020-2021 season.

A 5-foot-9, 174-pound left-shot winger from Cottage Grove, MN, Pierre joins the Musketeers on the heels of leading his high school program at Hill-Murray to the Class “AA” Minnesota State Championship. Just a sophomore this season, Pierre was a lethal scoring threat for the Pioneers, registering 19 goals and 27 assists for 46 points in the regular season, and added another six goals and 13 points in six state tournament playoff games.  A three-year varsity player for Hill-Murray dating back to his 8th-Grade year, Pierre wraps up his high school career with 39 goals and 50 assists for 89 points in 66 career games including playoffs and two State Tournament appearances.

Pierre, who is committed to play college hockey at the University of Wisconsin, will join the Musketeers immediately for the 2020-21 season.  "Nick Pierre has shown the ability to elevate his game on the biggest stages. We've been able to evaluate him over the past three years and he checks every box we want in a Musketeer,” Sioux City General Manager Andy Johnson said. “Nick's speed and skill are easily noticeable, but it's his hockey IQ and competitive nature that separate him from the rest of the class.  His parents, Scott and Courtney, have raised a very mature young man that will be an asset for the Siouxland community and the Musketeers hockey team. "

“I’m extremely excited to join Sioux City,” Pierre said Thursday. “The Musketeers are an outstanding organization and I feel it’s the best place for me to continue to develop my game going forward.”

"Nick has the compete and ability to have success in the USHL at his age,” Musketeers’ Head Coach Luke Strand said. “He is a winner that has the maturity to be a great fit for our lineup.”

Now in its ninth year, the USHL tender process allows teams to sign up to two 2004 birth year players prior to the 2020 USHL Phase I Draft, which is scheduled to take place in May.  Pierre follows Ryan Mantha, Eeli Tolvanen, Sampo Ranta, and Anthony Kehrer as Musketeers that have joined the team via the tender process