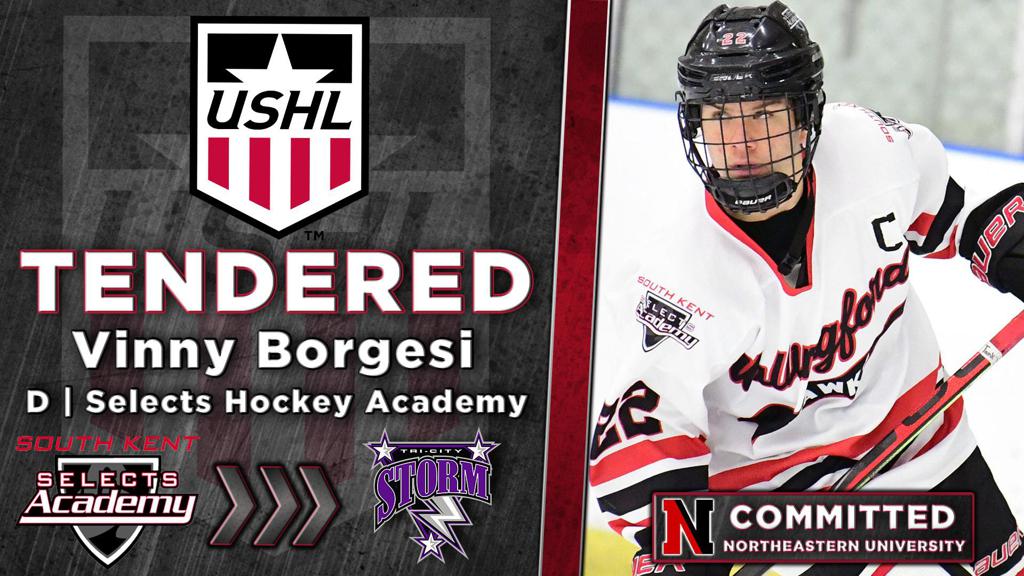 Kearney, NE. – The Tri-City Storm has announced the signing of defenseman Vinny Borgesi to a tender agreement for the 2020-2021 season. Borgesi previously announced a commitment to play college hockey at Northeastern University. Borgesi last skated for the Selects Hockey Academy and is an eligible prospect for the 2022 NHL Draft.

Borgesi, 16, of Philadelphia, Pennsylvania skated in sixty-one games during the 2019-2020 season for the Selects Hockey Academy at the South Kent School in South Kent, Connecticut. In those sixty-one games played, Borgesi notched twelve goals and recorded eighty-eight assists. Borgesi’s one hundred points were the most among defenseman for the South Kent U15 team last season. In addition to his time with the Selects Hockey Academy at the South Kent School last season, Borgesi was also selected to participate in USA Hockey’s 2019 Select 15 Player Development Camp at Northtown Center in Amherst, New York. Prior to his time with the South Kent School, Borgesi skated two seasons for the Valley Forge Minutemen in Phoenixville, Pennsylvania. In the 2018-2019 season, Borgesi led all Minutemen skaters with forty-five points. His fifteen goals and thirty assists were the most of any Minutemen defenseman during the 2018-2019 season. Borgesi spent his 2016-2017 season with the Team Comcast (now Team Virtua) Bantam Minor AAA program in Pennsauken, New Jersey. Borgesi also represented the United States at the 2020 Youth Olympic Games in Lausanne, Switzerland.

“Signing with a USHL team is a big step for me in my career but I’m up for the challenge and ready to work for it. I played for Ryan Ward at South Kent and he recommended that I connect with Anthony Noreen about the opportunity to play for Tri-City. I watched a lot of video highlights of the team, and thought playing for the Storm would be great for my development. I know a couple guys on the team and I see myself spending a lot of time at the rink next season. I’m a small guy, but move the puck well and have a pass first mentality.” Defenseman Vinny Borgesi

“These are special days when we are able to bring players like Vinny into our organization and our family. Vinny is a great player, he has a really special drive that separates him from other athletes and other hockey players. Our staff feels that this was the best available defenseman to tender, so we’re thrilled that he chose to join our organization. Vinny was the Captain of one of the best teams in U15 hockey this season, and he’s a similar player to those who we have had success with in the past.” President of Hockey Operations/Head Coach Anthony Noreen

“Vinny is without a doubt an elite level 2004 birth year defenseman. I had a chance to watch him play numerous times this year for South Kent, and he was a key component of that team. He is a proven leader, his hockey IQ is off the charts, and he’s a fierce competitor. Myself and our staff are thrilled to welcome Vinny to our Storm family” – General Manager Jason Koehler

Recent Tri-City Storm alumni from the South Kent program include Alex Limoges, Shane Pinto, and Zac Jones. The USHL tender process allows teams to sign up to two 2004 birth year players prior to the 2020 USHL Phase I draft. This is the second tender signing for the Storm for the 2020-2021 season. Today’s signing will replace Tri-City’s 2nd Round draft selection at the 2020 USHL Phase I draft.