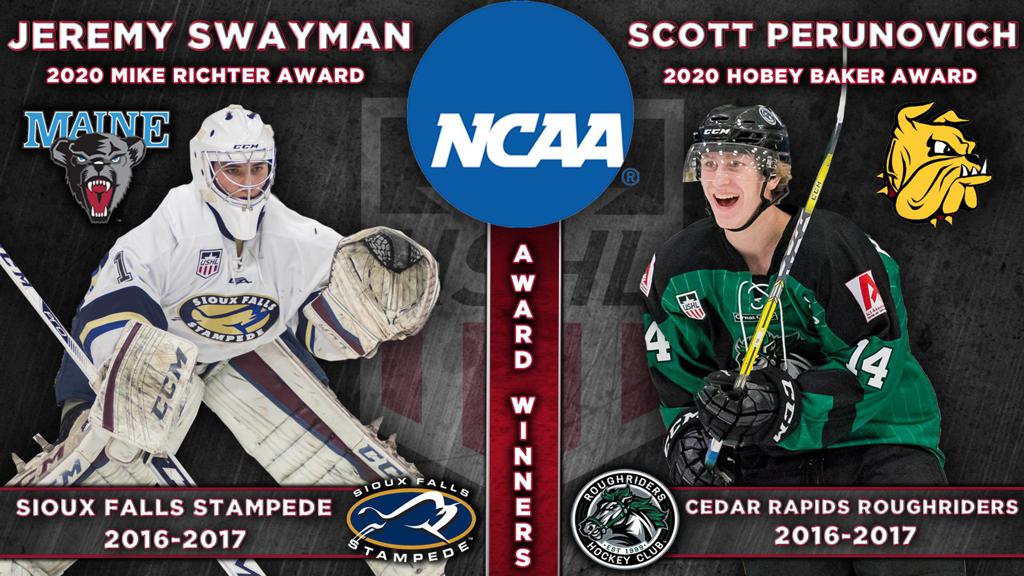 The NCAA announced on Saturday the recipients of both the Hobey Baker Award and Mike Richter Award, as well as first and second team All-Americans. Scott Perunovich, a junior defenseman at the University of Minnesota Duluth, and Jeremy Swayman, a junior goaltender at the University of Maine, were named the Hobey Baker and Mike Richter Award winners, respectively. Perunovich played the 2016-17 season for the Cedar Rapids RoughRiders while Swayman appeared in 32 games for the Sioux Falls Stampede during the same season.

The Hobey Baker award is given annually to the top NCAA men’s ice hockey player. Perunovich is the 13th USHL alumnus to take home the award, and marks the third time in the last three seasons a USHL alumnus has won the award (Adam Gaudette, 2017-18 & Will Butcher, 2016-17).

Perunovich, who had 40 points in 34 games this season, was part of an illustrious Bulldogs program during his time at UMD, with the Bulldogs winning back-to-back NCAA national championships during his freshman and sophomore seasons. Minnesota Duluth was ranked fifth at the time of the NCAA’s cancelled season. Perunovich ranked second in NCAA defensive scoring this season and finished his NCAA career with 105 points (20-85-105) in 115 games.

Perunovich was signed by the St. Louis Blues on March 27 to a two-year entry-level deal, forgoing his senior year at Minnesota Duluth. The Blues originally selected the Hibbing, Min. native 45th overall (2nd Round) in the 2018 NHL Draft.

When the NCAA announced its original list of 78 names eligible for Hobey Baker Award voting, 56 of those names were USHL alumnus. The list was then narrowed down to 10, featuring nine USHL alumnus, before the “Hobey Baker Hat Trick” was announced, featuring a pair of USHL alumni: Perunovich and Swayman.

The Mike Richter Award is given annually to the best goaltender in NCAA Division I men’s hockey. Swayman is the fifth USHL alumnus to take home the honor in its seven-year history. His win also marks back-to-back seasons that a former USHL netminder won the award after Cayden Primeau’s win last season.

Swayman is coming off a fantastic junior season in which he was named the Hockey East Player of the Year and led the conference in saves (782) and save percentage (.932) while finishing in a tie for the Hockey East-lead with three shutouts. The Anchorage, Alaska native also led the NCAA in saves (1,099) while his .939 save percentage was second in the nation. Swayman finished with an 18-11-5 record and made 30-or-more saves in 25 games this season, including five games with 40-or-more saves.

The former Sioux Falls Stampede netminder (2016-17) appeared in 100 NCAA games in three seasons at Maine. Swayman, like Perunovich, decided to forgo his senior season by signing his entry-level contract with the Boston Bruins on March 17. The Bruins originally selected Swayman 111th overall (4th Round) in the 2017 NHL Draft.

USHL alumni also comprised 20 of the 25 AHCA/CCM Hockey Men’s Division I All-Americans. Former USHL athletes made a clean sweep of the First Team honors in the East, took six of the seven positions on the Second Team in the West and accounted for four of the six honorees for First Team West and Second Team East.

Cal Burke, a senior forward at University of Notre Dame, was named one of the five finalists for the 2019-20 Humanitarian Award. Burke, an undrafted native of Boxborough, Mass., appeared in 121 games for the Cedar Rapids RoughRiders (2013-16) and signed a one-year deal with the Colorado Eagles (AHL) for the 2020-21 season on March 18.