The United States Hockey League (USHL) announced Thursday the All-USHL First, Second, and Third teams for the 2019-2020 season. The All-USHL teams are represented by 10 of the 16 USHL Member Clubs, including the Dubuque Fighting Saints (5), Chicago Steel (3), Omaha Lancers (2) and Sioux Falls Stampede (2) with multiple members on the teams. 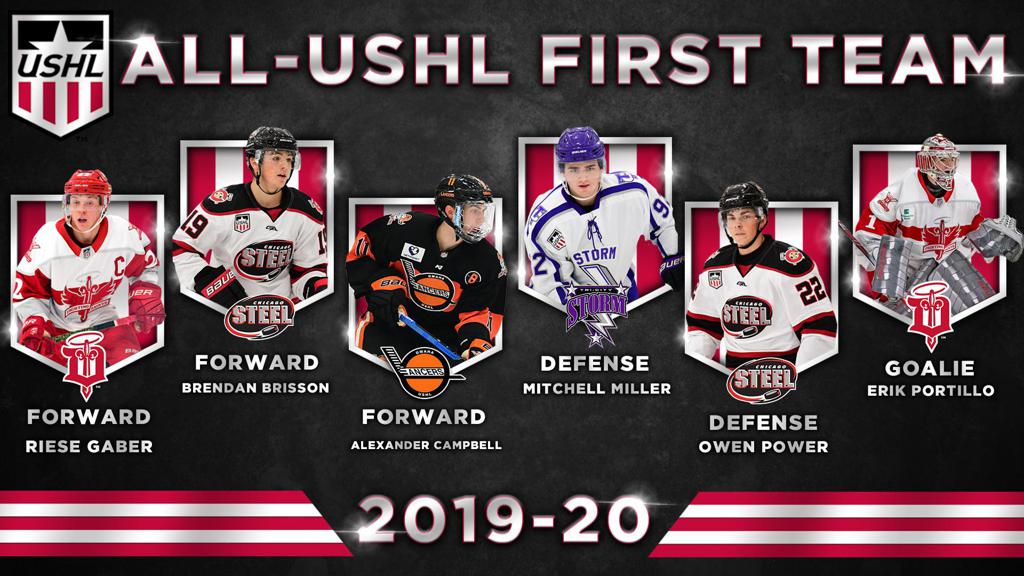 The First Team is backed by Dubuque Fighting Saints netminder Erik Portillo, who led USHL netminders with a 2.11 goals against average and was third in save percentage (0.915) and fourth in wins (19). Portillo, a Swedish netminder and Buffalo Sabres prospect (2019, Round 3, 67 overall), is committed to University of Michigan and finished his first season in the USHL with a 19-5-1-0 record in 27 appearances, including two separate four-game winning streaks.

On the backend are Owen Power (Chicago Steel) and Mitchell Miller (Tri-City Storm). The defensemen finished first and tied for third, respectively, in USHL defensive scoring this season. Power, a University of Michigan prospect, finished with 40 points (12-28-40) in 45 games. The 2021 NHL Draft-eligible defenseman is in his second season in the USHL and registered a career-high two goals and three points on February 26 this season. Miller, committed to University of North Dakota, had 33 points (8-25-33) in 44 games this season with the Storm. The Sylvania, Ohio native registered multiple points in nine of 11 games from January 14 to February 22, finishing with 22 points (6-16-22) in that span. Miller was ranked 49th among North American skaters in the final NHL Central Scouting rankings ahead of the 2020 NHL Draft.

The forward class includes Dubuque’s Reise Gaber, Chicago’s Brendan Brisson and Alexander Campbell of the Omaha Lancers. Gaber, who is eligible for this year’s Draft, finished tied for 8th in the USHL with 55 points (34-21-55), just six points behind the league’s leading scorer. The University of North Dakota commit now has 105 points (56-49-105) in 108 career regular season games, finishing as the Saints Tier-I leading goal scorer. Brisson, a USHL rookie, finished the season with 59 points (24-35-59) in 45 games, which was second in the league. The University of Michigan commit finished as the 20th ranked North American skater according to NHL Central Scouting after registering three-separate four-point games. Campbell rounds out the forwards as the Nashville Predators prospect (2019, Round 3, 65 overall) posted 57 points (18-39-57) in 46 games this season. The 57 points was tied for fifth in the league, in the middle of Brisson, Gaber and six other Fighting Saints and Steel players. The Clarkson University commit registered a 13-game point streak (8-14-22) from January 24 to February 23, including six multi-point games. 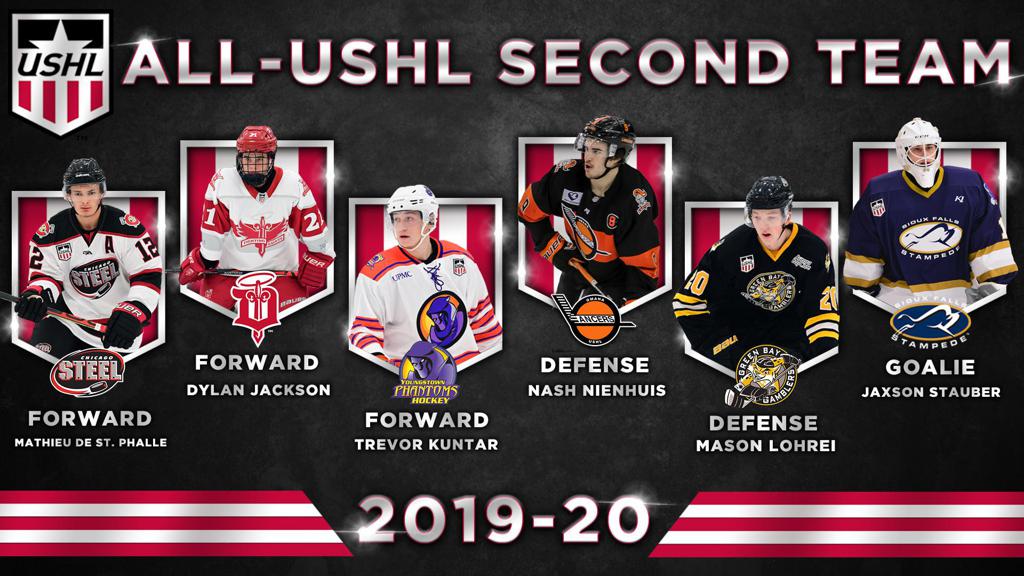 Sioux Falls Stampede netminder Jaxson Stauber was named to the Second Team All-USHL squad after returning to the Stampede from Minnesota State University, where he appeared in one game. The Providence College commit, who was named the 2019 Clark Cup Final MVP, appeared in 24 games this year with a 14-6-2-2 record and a league-best 0.918 save percentage.

The Second Team defensemen include Mason Lohrei (Green Bay Gamblers) and Nash Nienhuis (Omaha Lancers). Lohrei, an Ohio State University commit, posted 37 points (8-29-37) in 48 games this season, which was second among defensemen in the league. The Verona, Wis. native was ranked #132 among North American skaters in the final NHL Central Scouting final rankings. Nienhuis, who is committed to Michigan State University, also finished in the top-10 of defensive scoring with 32 points (2-30-32) in 44 games this season. The USHL veteran came over to the Lancers midway through his third season with the Muskegon Lumberjacks, finishing his USHL career with 51 points (4-47-51) in 154 regular season games.

On the offensive side of things, the Second Team includes Mathieu De St. Phalle (Chicago), Trevor Kuntar (Youngstown Phantoms) and Dylan Jackson (Dubuque). De St. phalle finished the season with a league-leading 60 points (30-30-60), leading an offensively stacked Chicago roster that finished with five of the top seven USHL point getters this season. The University of Wisconsin commit is 2020 NHL Draft eligible and finished his Steel career with 107 points (42-65-107) in 100 regular season games after joining the team midway through last season. Kuntar, a Harvard University commit, proved the third time is the charm, finishing his third season with Youngstown with 53 points (28-25-53) in 44 games. The Williamsville, N.Y. native posted 93 points (49-44-93) in 148 USHL games, all with the Phantoms, and was ranked #143 among North American skaters according to the final NHL Central Scouting rankings. Jackson was part of another offensively-stacked team in Dubuque, finishing the 2019-20 campaign with 55 points (21-34-55) in 48 games. The Northeastern University commit is 2020 NHL Draft eligible and registered 99 points (34-65-99) in 110 games over the last two seasons with the Fighting Saints. 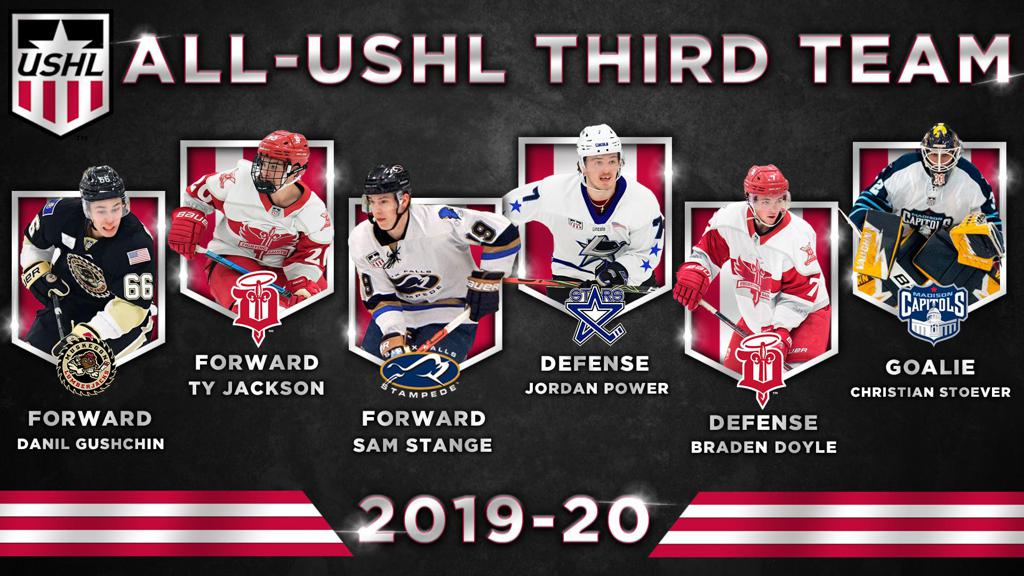 Third Team netminder Christian Stoever finished fifth in the USHL with a 0.912 save percentage in 37 combined games with the Madison Capitols and Des Moines Buccaneers. The Northville, Mich. native closed the season on a three-game winning streak with a 0.954 save percentage, including stopping 88 of the 90 shots he faced in back-to-back wins over the USA Hockey National Team Development Program in the final matchups of the year.

Braden Doyle (Dubuque) and Jordan Power (Lincoln Stars) are the Third Team defensemen for the 2019-20 season. Doyle, a Boston University commit, finished the season with 32 points (7-25-32) after appearing in five games for the Fighting Saints last year and being selected by the Los Angeles Kings (2019, Round 6, 157 overall) in the 2019 NHL Draft. Power, the Stars captain, put up 33 points (4-29-33) in his second season in Lincoln. The Clarkson University commit appeared in 101 games with the Stars over the last two seasons, notching 51 points (7-44-51) over that time.

Dubuque’s Ty Jackson leads the forward group of the Third Team All-USHL squad as his 58 points (17-41-58) tied for third in the USHL scoring. The Northeastern University commit, and twin brother of Second Team forward Dylan Jackson, put together a great pair of USHL seasons, culminating in 98 points (32-66-98) in 110 career games. Muskegon forward Danil Gushchin finished the season ranked #41 among North American skaters after posting 47 points (22-25-47) in 42 games. The Russian forward collected 14 points (8-6-14) in a five-game point streak from October 11 to November 1, 2019. Rounding out the forward group is the Sioux Falls Stampede’s Sam Stange. The University of Wisconsin commit and Eau Claire, Wisc. native is ranked #110 among North American skaters according to NHL Central Scouting's final rankings after picking up 45 points (26-19-45) in 48 games this season, including four games (2-1-3) with the Stampede after being acquired from the Sioux City Musketeers.