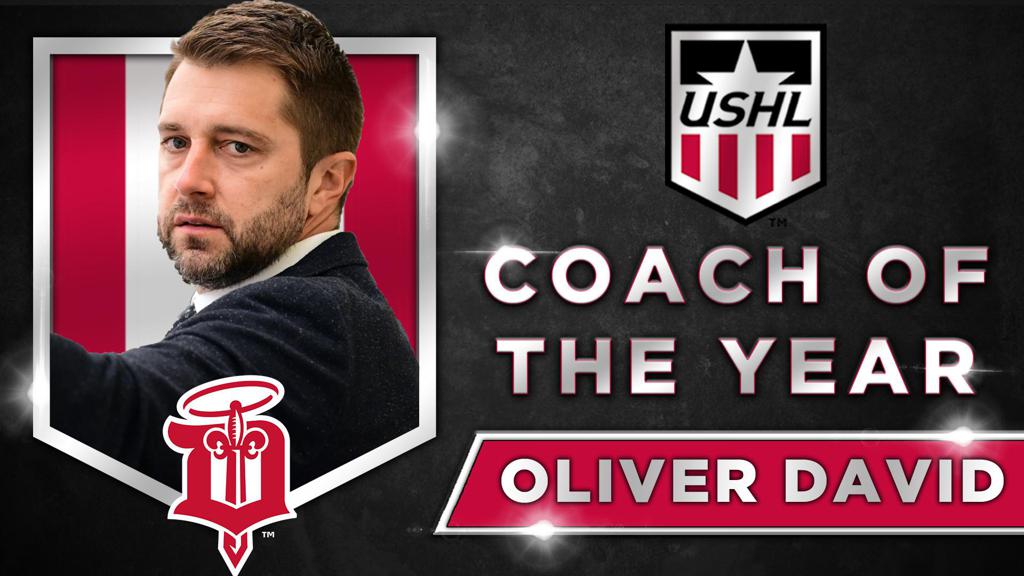 After coaching Dubuque to their second highest winning percentage in the Tier-1 era, Oliver David was named the USHL Coach of the Year. The award was given to a Fighting Saints bench boss for the first time in the Tier-1 era. David led the Fighting Saints to a 33-13-2 record and the team was just a few games away from clinching a third playoff berth in three seasons with David at the helm.

“Receiving this recognition supports some time-tested truisms, stuff I got to see and feel everyday this season,” said David. “Quite simply, we had difference makers behind the bench, in the locker room, and on the ice at every position. Our assistant coaches Evan Dixon and Justin Hale were tremendously supportive, helpful and competent, and most importantly believed wholeheartedly in the work we did. Furthermore, the player-leadership we had from Aidan Fulp, Kaelan Taylor, Luke Robinson, and Riese Gaber proved to me what an impact peer to peer learning and support can mean to a team. Coupled together, these positive contribution’s day to day from staff and our player-leaders cannot be overstated. It was the best I’ve seen in my decade-plus of coaching junior hockey. Also, how about the individual on-ice performances and milestones reached by some of the boys, wow, it was so much fun. Thanks to those that saw something in our efforts worthy of voting for. By recognizing us with this award- without knowing it directly- this is what has been exposed.”

This season the Saints matched many team records and also eclipsed a few individual records as well. David is responsible for coaching the team’s first Goalie of the Year and Player of the Year in Riese Gaber and Erik Portillo respectively. The 2019-20 team is the first in Saints history to possess six players with 15 goals or more and the team was on pace to be the best defensive team in Tier-1 history.

“I'm just so proud of OD,” said GM Kalle Larsson. “Having him coach our team is a privilege, and there is no one better at developing players and young men than him. I'm so happy he's the coach for our team, but even more happy to call him one of my best friends.”

David set a career-high in wins and winning percentage this year. He was responsible for the 2nd best power play in the USHL and a top-six penalty kill. Dubuque was top-five in most major categories and finished the season behind only the Chicago Steel in the USHL standings. David coached the second highest-scoring offense in the Tier-1 history for Dubuque and by seasons end had Dubuque in a first-round bye scenario.