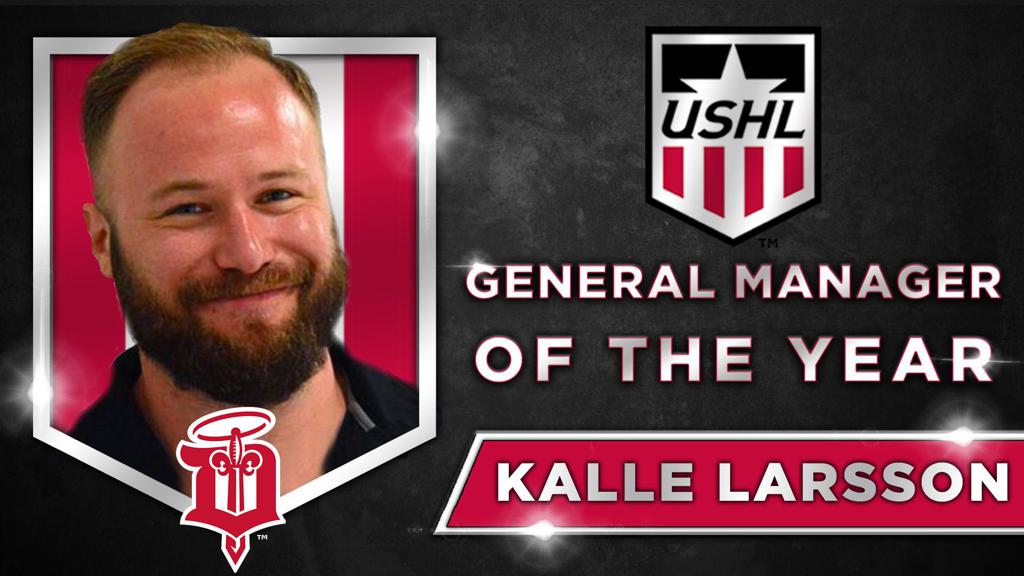 Saints General Manager Kalle Larsson continued the teams string of offseason awards, claiming USHL GM of the Year on Wednesday. Larsson, who has been the General Manager in Dubuque since the summer of 2017, is just the fourth GM of the Saints to win the league honor. Larsson joins the likes of Jim Montgomery, Cary Eades and Jack Barzee as winners of the award for Dubuque.

“The USHL includes so many great hockey minds and individuals I personally learned so much from,” said Larsson. “The fact that those people are the ones voting on this award is very humbling.”

Larsson is responsible for cultivating the strong crop of players that led to this season’s dominant record. Picks such as the Jackson twins, Riese Gaber and Erik Portillo helped lay the foundation for one of the best regular season performances in Saints history. Larsson joins a few of the players he selected, in Gaber and Portillo, as a recipient of a league award. In addition, the five players selected from Dubuque to represent the All-USHL Teams are the most of any team this season.

“Kalle joined our team in 2015 as Dir. of Scouting. In 2017 he became our GM. In 2020 he’s being recognized by his peers based on a team he built this season,” said head coach Oliver David. “In reality, this has been a long time coming. Often recognition doesn’t happen in real-time. He has been relentless. He has been true to himself. He has done it his way, and as is the case with smart, special people, he has gone about his business differently than the blind masses. Ultimately, his superpower is in being himself. I’m most proud of him for that- for keeping it real along the route to his day of recognition.”

Not only has Larsson been able to find strong skill for Dubuque at the USHL level, that skill has manifested itself at the higher levels as well. Dubuque players drafted by Larsson and subsequently drafted in the NHL include Matias Maccelli, Braden Doyle, Erik Portillo, Ryder Donovan, Patrick Kudla and Santeri Virtanen among others. Dubuque has seen over 95% of all players commit to Division I schools under Larsson's guidance. Larsson has also represented the Saints well at a league level, currently serving as the USHL GM Chair.

“Kalle has been instrumental in the Fighting Saints' success on the ice,” said Brad Kwong, Managing Partner of Northern Lights Hockey LLC. “He has worked tirelessly to scout, evaluate and recruit the top-tier talent we’ve been fortunate to have in Dubuque these past few years. Having been recognized by the entire hockey industry as a great evaluator of talent, an excellent administrator and a trusted ally amongst the GM’s in our league, he does it all with a sincere humility and without a need for fanfare or publicity.  For that he has earned much respect.  This is a well-deserved award for Kalle.”