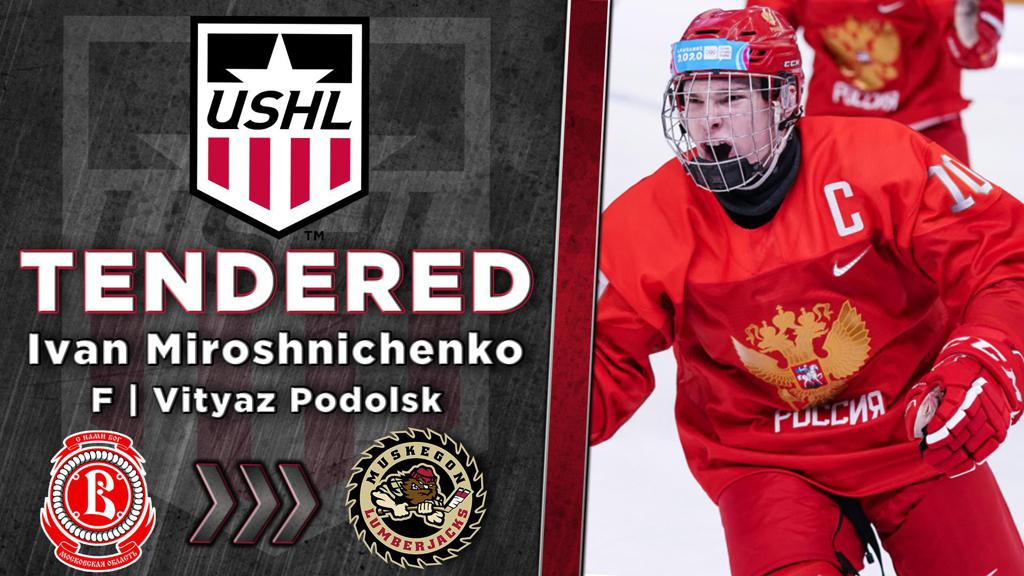 MUSKEGON, MI- The Muskegon Lumberjacks have announced the signing of Russian forward Ivan Miroshnichenko to a tender agreement.

The 2004-born forward stands 6-feet tall and weighs in at 185 pounds. Miroshnichenko hails from Ussuriysk, Russia, and is already drawing attention as one of the top prospects eligible for the 2022 NHL draft.

“As a staff we had the privilege to watch Ivan lead his team to a gold medal and dominate the 2019 Youth Olympics Games,” said Lumberjacks head coach Mike Hamilton. “Ivan is an elite skater, hits like a truck, and has an unbelievable shot. He was team captain and led by example- playing in all scenarios of the game. He checks all the boxes; we couldn't be happier to have him coming to Muskegon where he will continue to develop his game.”

Miroshnichenko comes to Muskegon in the wake of countrymen Andrei Svechnikov, Alex Yakovenko, Igor Larionov Jr., Danil Gushchin, Egor Afanasyev, and others. Muskegon’s brass has forged an unprecedented connection with Russia, and Miroshnichenko is the next Russian-born player who will take aim at stardom in the USHL.

We are very excited with the addition of Ivan to our organization,” said President of Hockey Operations Steve Lowe. “Ivan is a world-class player and we are excited to work with him and develop him even more. To sign an elite player like Ivan is a great compliment to our coaching staff, organization, the USHL‘s development model, and the growth of our league overall.”

“We couldn’t be happier with the addition of Ivan to our organization and league,” said Lowe. “This is a tremendous step for both Muskegon and the USHL.”

As a 15-year-old last year, Miroshnichenko played against U18 competition in his native Russia, compiling ten goals in just eight games for Vityaz Podolsk. Against U17 teams, Miroshnichenko racked up 11 goals and seven assists (18 points) in 16 games.

In international play, Ivan represented his home country at the U16 level a total of 15 times. In those 15 games, he scored 17 goals and tabbed 10 assists- nearly two points per game.

“I am very pleased to have signed a tender agreement with the Muskegon Lumberjacks,” Miroshnichenko said. “I’ve been following this organization since Andrei Svechnikov started playing for Muskegon. My dream is to follow Andrei’s path to the NHL, and to do that I will have to have a great season in Muskegon. I look forward to meeting the coaching staff, players, and people of Muskegon who are famous for their hospitality.”

Miroshnichenko is Muskegon’s second tender this season, and marks the first time in team history that the Lumberjacks have tendered two players. Muskegon signed forward Owen Mehlenbacher on March 26.

Miroshnichenko and Mehlenbacher will take the place of Muskegon’s first and second-round picks in the Phase I 2020 USHL draft which takes place on Monday, May 4th, followed by Phase II on May 5th.