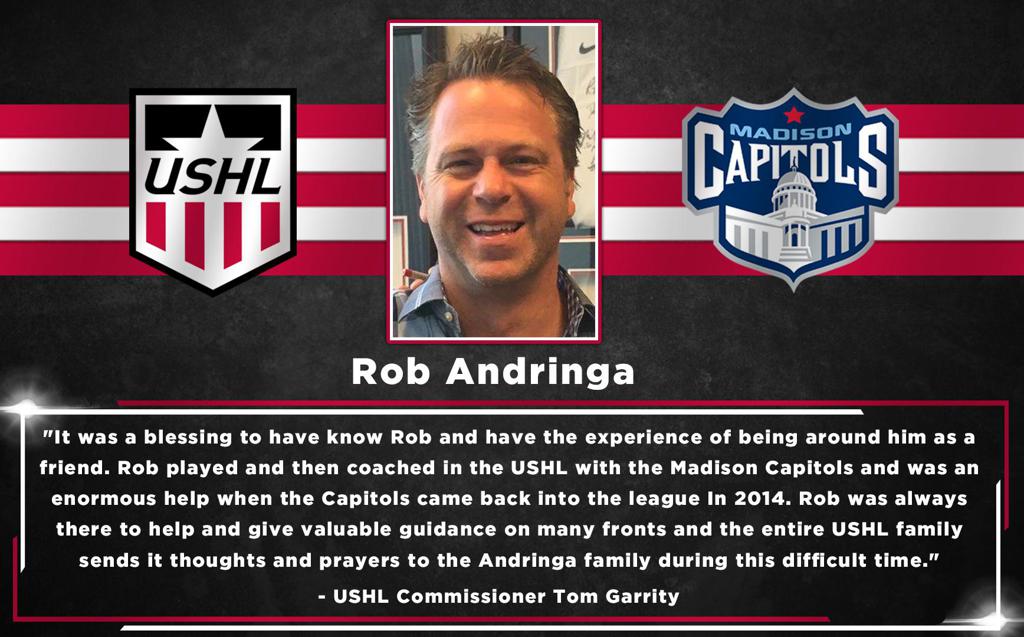 Rob Andringa, a Madison Sports Hall of Fame member who won an NCAA championship with the University of Wisconsin men’s hockey team and later called one as a popular broadcaster, died Friday. He was 51.

A Madison native, Andringa was diagnosed with stage 4 colon cancer in December 2017. He stopped chemotherapy treatment in early May.

His fight with the disease inspired a hashtag — #RingoStrong, incorporating his nickname — and drew well wishes from around the hockey world and beyond.

Andringa’s son, Jack, posted on Instagram Friday night: “If the dash between the lines is all we leave on this earth, not many compare to the story you left pops. Love you dad.”

Andringa was inducted into the Madison Sports Hall of Fame in 2011, one year after his father, Conrad, a longtime doctor who worked with many sports teams.

Rob Andringa was known most for his hockey exploits, including stints as a coach in the Madison area, but he served UW athletics in a number of capacities after his playing career ended in 1991. He was a member of the Athletic Board and was president of the National W Club.

He stands 10th among UW defensemen with 104 career points and is one of only 12 at his position and 74 overall to reach the century mark for the Badgers.

After Andringa’s diagnosis, artist Kari Fisher dedicated her 2018 “Bucky on Parade” statue, named Ringo, to him. Another version now stands outside State Street Brats, which is owned and operated by members of Andringa’s extended family.

“Being a kid from Madison, wanting to be a Badger, been a Badger, love everything Badgers, to have this is pretty incredible,” he said at an unveiling.

Born Oct. 26, 1968, Andringa grew up down the block from the household of Bob and Martha Johnson on Flad Avenue on Madison’s southwest side. His parents were longtime friends of the Johnsons, and it helped opened doors for the Andringa children with the UW men’s hockey team.

Rob Andringa was a stick boy for coach Bob Johnson’s Badgers while his brother, Jeff, played for the team from 1979 to 1983.

At Memorial High School from 1983 to 1987, Rob Andringa helped the Spartans win the 1985 state hockey title with a 24-0 season and also lettered in football and baseball. He played his final two seasons on the ice with the Madison Capitols in the United States Hockey League.

He was an all-conference football selection at quarterback and earned honors as Big Eight baseball player of the year with a .612 average as a junior catcher. He was part of a gold-medal winning baseball team at the U.S. Olympic Festival in 1987 but had to miss the championship game to travel to West Germany for a national team hockey tryout.

Andringa also played baseball for UW, but he stood out as a durable defenseman on the ice, missing only two games over four years. He also competed in the 1990 U.S. Olympic Festival, this time in hockey.

As a junior in the 1989-90 season, Andringa scored the game-winning goal in two NCAA tournament games and was named to the all-tournament team as the Badgers won the program’s fifth national title. The first was against Maine in Game 1 of the quarterfinal series at the Dane County Coliseum. The second was the fourth UW goal in a victory over Colgate in the championship game in Detroit; he added two assists that day.

“It was a slap shot from the blue line,” Andringa told the Des Moines Register in 1993 in describing his championship-game score. “I didn’t think I could ever take a slap shot that perfect. I looked to see where I wanted it to go, I hit it and it went there. Everything just felt right. I knew then it was the best shot I’d ever taken.”

As a senior co-captain alongside forward Don Granato, Andringa was named the team’s most consistent player as well as its most competitive. He then earned honors from the Madison Pen and Mike Club as Favorite Son.

After brief stints playing pro hockey in 1991 and 1992, Andringa coached with the Wisconsin Capitols, first as an assistant and then as head coach starting in December 1992.

He left the Capitols before the 1993-94 season; Granato replaced him. Andringa later assisted Vic Levine and Jon Spencer as an assistant at Madison Memorial and served as an instructor at the Bob Johnson Hockey School in Colorado, where he was a participant as a youth.

After another short period playing pro hockey, this time with the Minnesota Arctic Blast roller hockey team in 1994, Andringa started working in personal finance in 1995.

He was a color analyst for Badgers hockey radio and TV broadcasts since 1996, first with Wisconsin Public Television and later teaming with Brian Posick on WIBA from 2003 to 2007, when he returned to the TV side. Included in the radio work was UW’s 2006 national championship, when Andringa punctuated a triple-overtime quarterfinal victory over Cornell by shouting: “Woooo! Keep it going, baby!”

The Big Ten Network hired him as a color analyst in 2013.

Andringa, who with his wife Christi had three children — Jack, Carson and Dara — occasionally joined Posick for TV and radio broadcasts in the two Badgers seasons since his cancer diagnosis.

“We’re not going to worry about tomorrow. We’re not going to worry about yesterday. We’re going to live in the moment,” Andringa said in October 2018. “That’s why doing Badger hockey was one of those things that I had in the back of my mind, like, if I could get well enough to do that again, I know that would pick up my spirits and probably give me as much medicine as any chemo pill would ever give me, to be in an element that I feel so comfortable and happy being around. We made a point, my wife and I, to go for it and to have fun doing it.”

"It was a blessing to have know Rob and have the experience of being around him as a friend. Rob played and then coached in the USHL with the Madison Capitols and was an enormous help when the Capitols came back into the league In 2014. Rob was always there to help and give valuable guidance on many fronts and the entire USHL family sends it thoughts and prayers to the Andringa family during this difficult time."