Kearney, NE. – The United States Hockey League (USHL) has announced that Storm defenseman Kyle Aucoin has been named the 2019-2020 USHL Scholar-Athlete of the Year. Aucoin has also been named to the 2019-2020 USHL All-Academic team. He is the first student-athlete in the history of the Tri-City Storm to win the award. Aucoin is an eligible prospect for the 2020 NHL Draft and previously announced a commitment to play college hockey at Harvard University.

Kyle Aucoin, 17, of Hinsdale, Illinois, joins Riley Stuart (Dubuque Fighting Saints), Jack Horbach (Madison Capitols), Donald Kempf (Muskegon Lumberjacks), and Stephen Halliday (Dubuque Fighting Saints) as players from around the league to be named to this year’s prestigious USHL All-Academic Team. The Storm organization has had a player named to the All-Academic Team three of the last four seasons (Adam Goodsir 2017, Cole McWard 2019, Kyle Aucoin 2020). Aucoin earned a cumulative unweighted GPA of 4.9 and a cumulative weighted GPA of 5.1 in twenty-four completed courses at Hinsdale High School in Hinsdale, Illinois. Aucoin completed his final year of high school at Kearney High School while playing for the Storm.

Aucoin was drafted by the Storm 35th overall in the 3rd Round of the 2018 USHL Phase I Draft. He appeared in seven games as an affiliate list callup during the Storm’s 2018-2019 Anderson Cup Championship season. Aucoin skated in all forty-eight regular season games during the 2019-2020 season. He netted his first career goal on October 10th, 2019 in Tri-City’s 4-1 win over the Sioux Falls Stampede at the Viaero Center. Aucoin scored two goals and recorded elevens assists for thirteen total points in his rookie season with the Storm. Prior to joining the Storm, Aucoin won a USA Hockey U16 AAA National Championship with the Chicago Mission program.

“I’m very honored to be named this year’s USHL Scholar-Athlete of the Year and to be chosen to represent the Storm on the USHL’s All-Academic team. School is something I have always held as a high priority and its one of the reasons I made the decision to commit to Harvard. I have always strived to make the highest grade possible in whatever class I am in. I appreciate the knowledge I’ve taken in, its stuff that you can use in everyday life and I’m happy that I’ve got that background” Defenseman Kyle Aucoin

“I think these honors are certainly something Kyle is deserving of and something that our organization is extremely proud of. Being able to blend being an elite student-athlete with being an elite player is something makes him a special person. His commitment to putting in the time and energy that it takes to achieve excellence both in the classroom and on the ice is something that we take a lot of pride in as an organization. We are extremely excited to see him collect these honors.” President of Hockey Operations/Head Coach Anthony Noreen 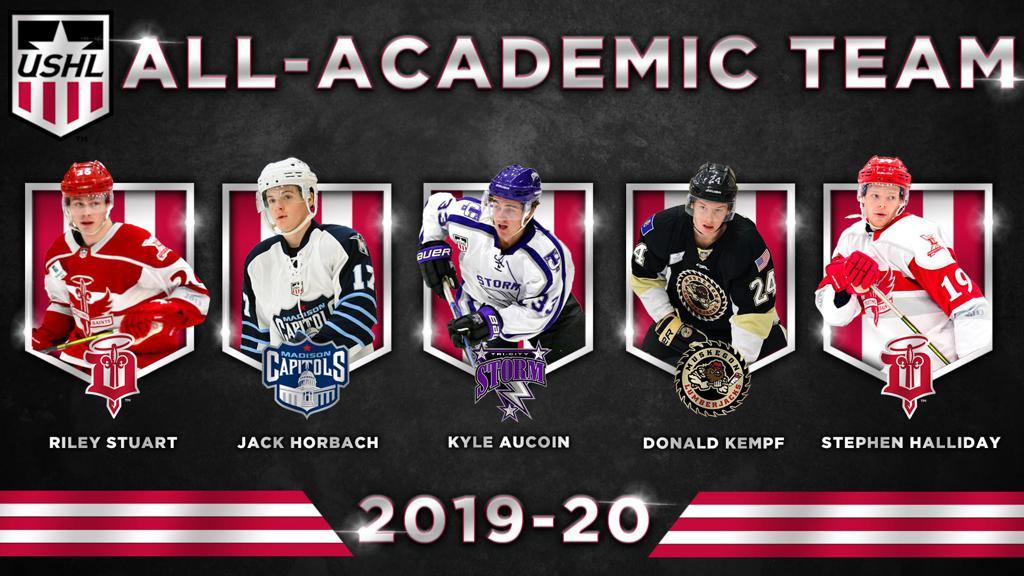 For the third-straight season, the Dubuque Fighting Saints saw at least two players named to the USHL All-Academic Team. Riley Stuart and Stephen Halliday were both honored by the league for producing exceptional results in the classroom all season long.

Dubuque has placed a strong emphasis on molding well-rounded individuals on and off the ice during their 10 seasons back in the USHL. Stuart and Halliday have continued a tradition of excellence in the classroom, showcasing a strong work ethic and drive to get better in their academics.

“Handling the rigors of the USHL schedule alone is difficult,” said Saints GM Kalle Larsson. “Combining it with not only being a full-time student, but also excelling in the classroom takes special skills and determination. Stephen and Riley have demonstrated excellence in the classroom and this a well-deserved recognition. Academics is a very important part of our program, and our academic advisor, JoAnne Gibson, once again shows what a great resource she is to our players.”

In head coach Oliver David’s three seasons, Dubuque has placed seven players on the All-Academic Team out of a total of 18 selections in those three years. JoAnne Gibson, who has been the Saints Education Coordinator since 2010, has been instrumental in the academic excellence in Dubuque.

“I want to congratulate Steve and Riley for graduating in the Class of 2020 and for continuing the Saints' tradition of academic achievement,” said Gibson. “Both of them were very self-motivated, worked hard, and did not need my persuasive comments very often.  Thanks to the faculty, administration, and staff at Dubuque Senior High School for the support they give to our hockey players.  It takes the whole community to have this kind of success.”

Halliday and Stuart are both already committed to college, continuing their hockey careers and higher education at North Dakota and Arizona State respectively. Teammate Ty Jackson was named to the All-Academic Team last season.