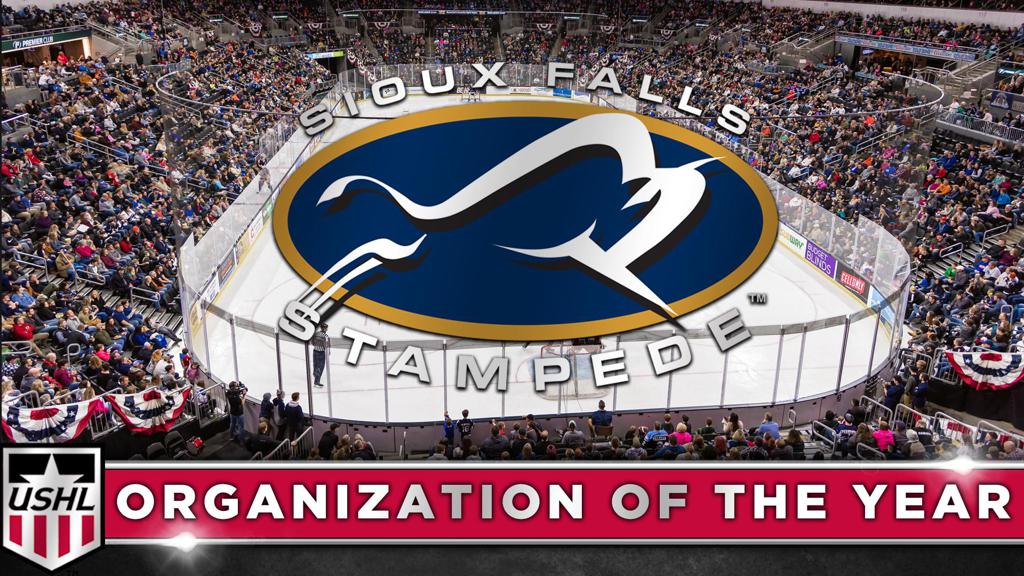 “We are honored to be chosen as the organization of the year once again,” said Stampede managing partner Brian Schoenborn. “We want to thank our fans, sponsors and the community for their passionate support. We are fortunate to have the best fans in hockey and look forward to cheering on the Herd at the PREMIER Center this fall.”

The Stampede are led by team President Jim Olander and led the league in attendance for the eighth-straight season. The club drew almost 140 thousand fans in 24 home games prior to the season cancelation on March 18 due to the coronavirus pandemic. The Herd hosted more than eight thousand fans on three occasions: the Clark Cup banner raising home opener, Military Appreciation Night and the 13th Annual Wiener Dog Races.

The wiener dog races drew a sell-out crowd of 10,678 fans to the Denny Sanford PREMIER Center on Feb. 15. The annual promotion continued to garner global exposure with the National Hockey League (NHL) highlighting the Sioux Falls Fighting Wiener Dogs jersey across their social media platforms and was profiled on Golic and Wingo’s ESPN radio program. The publicity drew interest in the races from all 50 states and ten different countries across the world, including the first-ever international entry from Toronto, Canada.

“I am proud of our entire organization,” said team President Jim Olander. “A lot of long hours and hard work goes into putting together a successful season. From Korey McDonald leading our sales team to our entire front office staff and coaching staff, we are privileged to have such a dedicated crew. This award would not be possible without the great support we have from the community and our fans who come out each night, win or lose, our season ticket holders and corporate partners.

“I would also like to thank our wonderful ownership group, which consists of partners Brian Schoenborn, Bob Naegele III, Roger Sit, Mike Steinhauser and Jeff Miller. They are supportive in all that we do and provide the club with the necessary tools to be successful.”

After a 2-10-2 start to the campaign, Head Coach Scott Owens and his staff helped guide the Herd to a 19-9-3 run and a qualifying position for the 2020 Clark Cup Playoffs before the season was cut short. Three different players earned USHL all-team honors, including veteran goaltender Jaxson Stauber who finished the season with a league-best save percentage (.918) and the fifth-best goals-against average (2.45).

The team and players were active in the community across the Sioux Empire, supporting local hospitals, the Sioux Falls Community blood bank, Meals on Wheels, the food bank, local schools, youth hockey associations and more. As part of the organization’s commitment to staying involved in the community, players are required to spend their time volunteering around the Sioux Empire each month.