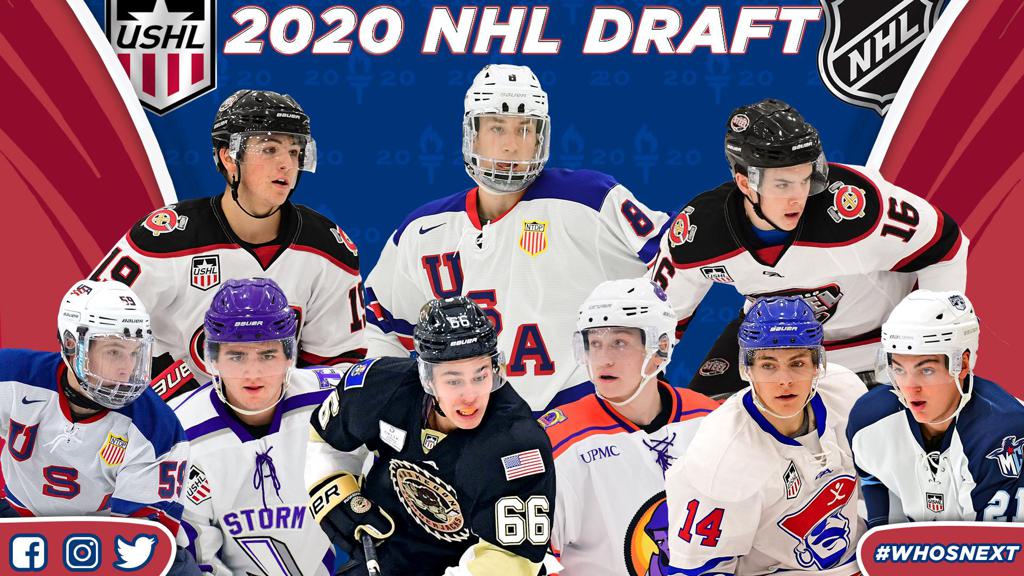 The USA Hockey National Team Development Program (NTDP) led the way with 16 players taken in the Draft while the Chicago Steel (7) and Tri-City Storm (6) each set franchise records for players taken in a single Draft. All 16 of the current USHL Member Clubs had at least one player selected during the 2020 NHL Draft.

The 51 USHL Draft picks were spread out over 24 of the 31 NHL Franchises. The Detroit Red Wings, Montreal Canadiens and St. Louis Blues all selected four USHL players each. The Chicago Blackhawks, Los Angeles Kings, Nashville Predators and Tampa Bay Lightning all added three USHL players to their depth charts.

The Second Round started where the First Round ended for the USHL, with a member of the Steel being selected as Sam Colangelo was chosen 36th overall by the Anaheim Ducks. Two selections later, Thomas Bordeleau was picked up by the San Jose Sharks. Later in the First Round, Tyler Kleven (Ottawa) was selected 44 overall, followed directly by former NTDP teammates Brock Faber (Los Angeles - 45 overall), Drew Commesso (Chicago - 46 overall) and Luke Tuch (Canadiens). The Second Round was then closed out by a pair of defenseman, Sioux Falls Stampede alumnus Yan Kuznetsov (Calgary Flames - 50 overall) and Green Bay’s Mason Lohrei (Boston Bruins - 58 overall).

Another trio of NTDP players were selected in the Third Round, beginning with Ty Smilanic, who was taken 74th overall by the Florida Panthers. Landon Slaggert (Chicago) and Dylan Peterson (St. Louis) were then selected with the 79th and 86th overall selections, respectively. The Muskegon Lumberjacks saw their first player come off the board as San Jose selected Danil Gushchin 76th overall. Lincoln Stars defenseman Jake Boltmann was then selected by Calgary with the 80th selection in the Draft. The Stars captured the moment Boltmann and the rest of the team learned of the selection while on the ice for practice. The video was featured during NHL Network draft coverage and shared on the Twitter pages of the NHL, USA Hockey, Sportsnet, Hockey Night in Canada, BarDown and the Flames. Rounding out the eight total Third Round picks was the Dubuque Fighting Saints’ own Wyatt Kaiser (Chicago - 81 overall), Des Moines Buccaneers’ Alex Laferriere (Los Angeles - 83 overall) and the Youngstown Phantoms’ Trevor Kuntar (Boston - 89 overall).

Round Four and Five each featured a USHL draft-high this year of nine picks each. In the fourth round, Sam Stange (Sioux Falls / Sioux City Musketeers) started things off as the Red Wings took him with the 97th overall selection. Musketeers forward Blake Biondi, who also appeared in games for the NTDP, was then picked 109th overall by Montreal. USHL players then accounted for seven of 14 picks from 111-124 to close out the round. Tri-City had both Mitchell Miller (Arizona Coyotes - 111 overall), who also played two seasons with the Cedar Rapids RoughRiders, and Colby Ambrosio (Colorado Avalanche - 118 overall) come off the board in the Fourth Round. Green Bay’s Jackson Kunz (Vancouver Canucks - 113 overall), NTDP’s Eamon Powell (Tampa Bay - 116 overall) and Chicago’s Sean Farrell (Montreal - 124 overall) accounted for three more of the USHL’s 51 picks. Farrell, skated two seasons with the NTDP before joining the Steel last season. Former USHL players Tanner Dickinson (Green Bay) and Alex Jefferies (Dubuque) rounded out the round being selected by the Blues (119 overall) and New York Islanders (121 overall).

The USHL now turns its attention to the 2020-21 season with players already in markets for the season and gearing up for a November 5 start date for the USHL regular season. This season, the 14 participating USHL Member Clubs for the 2020-21 season will play a 54-game regional schedule to limit travel by teams.

For more information on the USHL, please visit USHL.com.

Headquartered in Chicago, Illinois, the 2020-21 season will be the USHL's 19th season as the nation's only Tier I junior hockey league. The USHL had 55 players selected at the 2019 NHL Draft and have 542 players eligible for the 2020 NHL Draft, including 84 on the NHL Central Scouting's Final Rankings issued in April. More than 800 league alumni are currently on NCAA Division I rosters, further establishing the USHL as the world’s foremost producer of junior hockey talent.