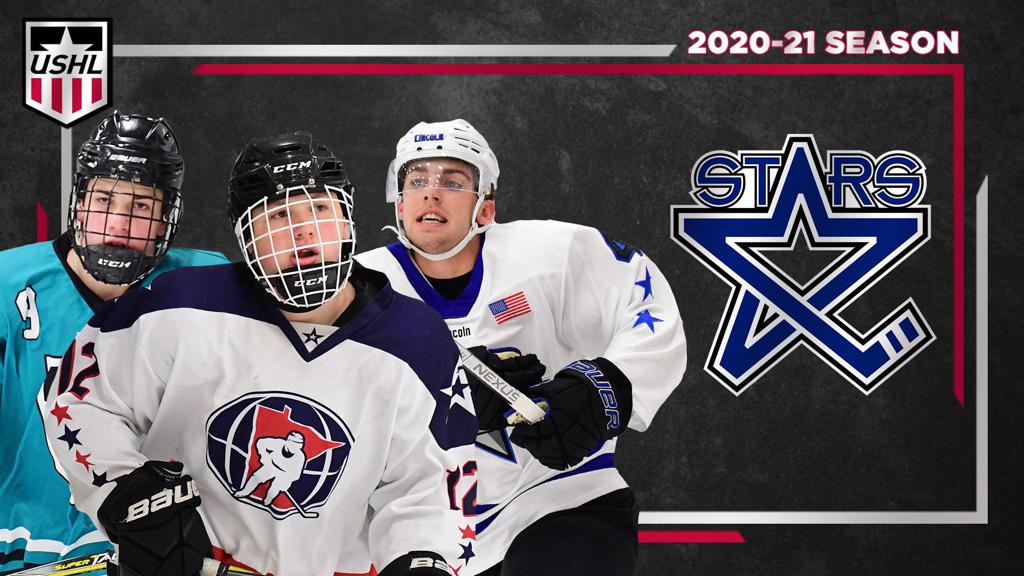 The Lincoln Stars will look to a pair of returning players in Jake Boltmann and Carter Schade, as well as a pair of newcomers Luke Mittelstadt and Winter Wallace as they prepare for the 2020-21 USHL regular season.

"We are excited about a lot of things," said first-year Lincoln Stars General Manager and Head Coach Chris Michael said. "First and foremost is to have our guys back in Lincoln and seeing them finally get some form of normalcy back into their lives as elite level athletes. To see the joy they have in coming to the rink every day and being around their teammates again has been one of the most rewarding things to witness. We all know they've been through a lot over the last few months so it's been a lot of fun getting back to work on and off the ice and learning how to adapt to the circumstances we still face together to give ourselves the ability to play. We are also very excited to see our fans, especially our loyal season ticket holders along with our billet families. They truly are such an important piece of our organization, and it'll be nice to finally welcome them back to the Ice Box after an eight-month hiatus. And finally, it'll be great for us to see all the hard work that our front office and our league put in to get us back to playing but still ensuring the health and safety of everyone involved. Our goal from day one as a staff has been to continue restoring the championship culture that the Stars were built on and to embody what our city represents and stands for. There are a lot of new faces within our staff and our player personnel so we are taking this one day at a time and continue to grow and bond as a group on and off the ice, focused solely on our process. We feel like we have gotten off to a good start and look forward to putting in the work that's required on a day-to-day basis in order to be competitive in this league, especially the Western Conference. We look forward to playing some games and seeing where we are at in our process and where we can continue to improve on each day. It's a privilege to compete in the best junior league in the world and we cannot wait to get things rolling again."

Boltmann, who was selected by the Calgary Flames in the 2020 NHL Draft (Round 3, #80 overall), returns to Lincoln for the second year and fourth in the USHL. Last season in 17 games with the Stars, the University of Minnesota commit registered nine points (2-7-9), giving Boltmann a USHL career total of 10 points (2-8-10) in 29 games over four seasons with the Stars and Central Illinois Flying Aces. The Edina, Min. native has also amassed 54 points (13-41-54) in 99 career games with Edina High (Minnesota) over the last four seasons, including being named to the USHS All-USA Hockey Second Team for the 2018-19 season.

Schade also returns to the Stars after appearing in five games with the team last season. The Penn State University commit tallied a pair of goals (2-1-3) in his short USHL stint after collecting 50 points (23-27-50) in 50 games as an alternate captain for Pittsburgh Penguins Elite (16U AAA) during the 2019-20 season and helping lead his team to a USA Hockey Tier I U16 Championship the season prior.

Newcomers Mittelstadt and Wallace both found their way to the Stars this offseason, but through different drafts. Mittelstadt, a University of Minnesota commit, was selected by Lincoln in the Cedar Rapids RoughRiders and Madison Capitols Dispersal Draft back in September. The Eden Prairie, Min. native has never appeared in a USHL game but was formerly selected by Madison with the 2nd overall pick of the 2019 USHL Phase I Draft. Mittelstadt, the younger brother of Buffalo Sabres forward and USHL alumnus Casey Mittlestadt, is eligible for the 2021 NHL Draft and comes to the Stars after putting up 56 points (7-49-56) in 50 games over the last two seasons with Eden Prairie High (Minnesota).

Wallace is a top young talent for the Lincoln team after being selected 8th overall in this offseason’s USHL Phase II Draft. The Michigan State University commit comes to the Stars after combining for 151 points (59-92-151) over the last three seasons in the Shattuck-St. Mary’s program.

Home Opener/Throwback Night (11/13): The Stars will kick off their 2020-21 USHL home schedule against the Des Moines Buccaneers on November 13th at the Ice Box. It’s Throwback Night, so break out the silly string and your favorite '90s attire and join us in celebrating 25 years of Lincoln Stars hockey!

Military/Veterans Night (1/16): On January 16th, Lincoln will welcome their interstate rival, the Omaha Lancers, for Military/Veterans Night. For the second straight year, the Nebraska Warriors are the game-night sponsor! There will be a jersey auction for the Stars' game-worn uniforms on the North Zone stage following the game. Last year’s jersey auction totaled over $20,000!