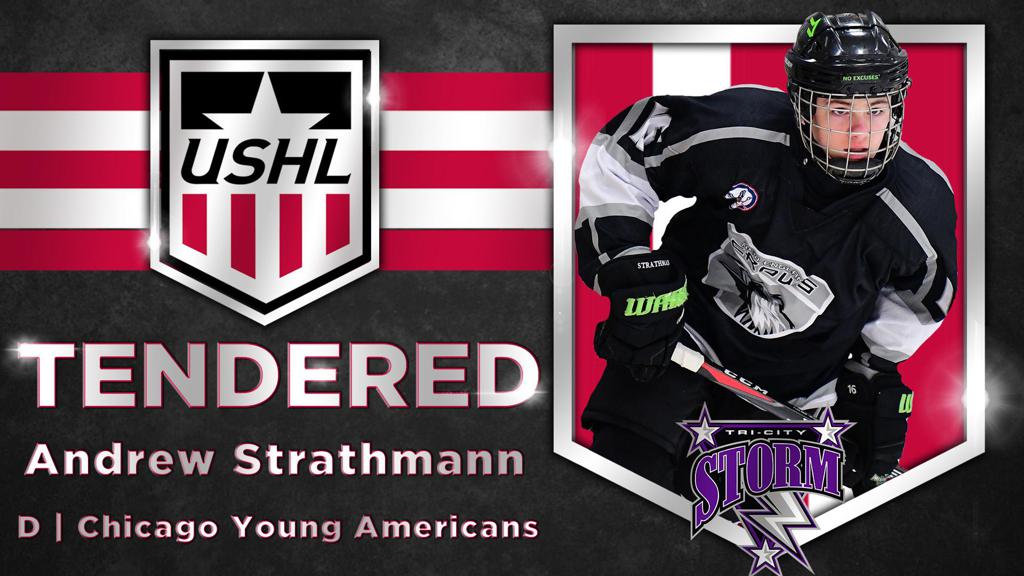 Kearney, NE. – The Tri-City Storm has announced the signing of defenseman Andrew Strathmann to a tender agreement for the 2021-2022 season. Strathmann currently skates for the Chicago Young Americans (CYA) program in Palatine, IL.

Andrew Strathmann, 15, of Beach Park, Illinois has appeared in thirty games during the 2020-2021 regular season with CYA and has scored eight goals. Strathmann has also provided the team with twenty assists for twenty-eight total points. He previously skated for the Chicago Mission 14U AAA program during the 2019-2020 season. Strathmann is 6’1’’, 165 lbs, and is set to join the Storm for the 2021-2022 USHL season.

“Signing with the Tri-City Storm is a great opportunity, I’m excited to play for supportive coaches who have already helped me a lot. My coaches at CYA have also been great, they are very supportive, and their attention to detail is great. A lot of people might see the offensive side of my game, but I am solid defensively too. It is something that I have worked on a lot and it is becoming a big part of my game. Playing in the USHL next season will be a challenge, I’ll have to get used to the speed, but I’m excited to share the locker room with older, more mature guys, who will help me out through my first year. I’m excited to join the Storm organization!” Defenseman Andrew Strathmann

“Andrew is a player who we feel fits every criteria we are looking for when considering tendering a player. He is extremely mature for his age, which is a credit to where he comes from and his upbringing. He challenges himself, he is coachable, he wants to get better, he has talent, and has an elite work ethic. His best hockey is in front of him and we expect him to thrive in our development system, no different than how we’ve seen him thrive in the development system of CYA in training with Ryan Ward and Karl Linden. We feel Andrew is one of the best players in the 2005 birth class, and the fact that he was willing to commit to use this early says a lot about the infrastructure we have in place for developing young men and hockey players.” President of Hockey Operations/Head Coach Anthony Noreen

“Having been out scouting the last three months, it is apparent that Andrew Strathmann is one of the top defenseman in the 2005 birth class. He has a bright future ahead of him at the junior, collegiate, and professional levels of hockey, and we are thrilled that he has selected and chosen to play for us beginning next season. Andrew will be able to train, develop, and prepare to achieve his future hockey goals here in Kearney.” General Manager Jason Koehler