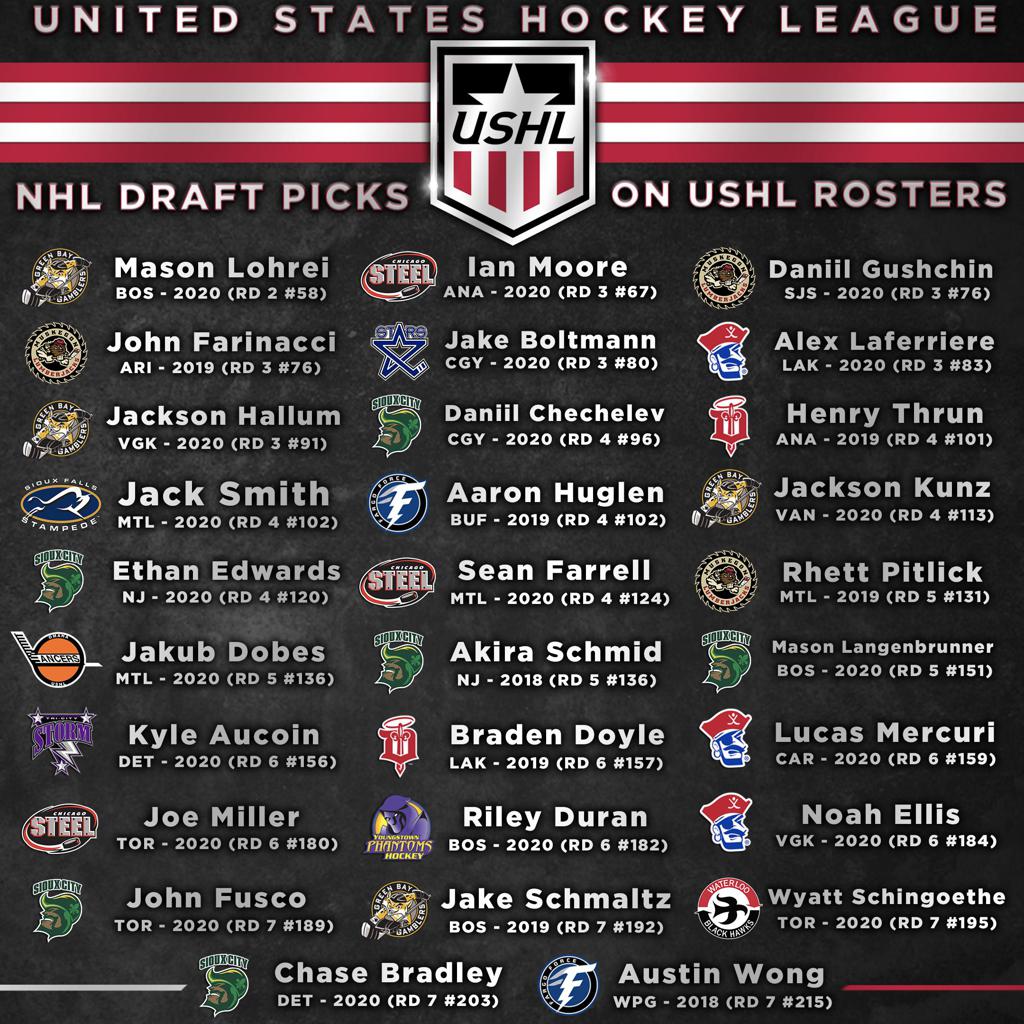 This season, United States Hockey League (USHL) fans have the same great opportunity they have every season: the opportunity to watch future NHL players lace up the skates for their hometown team. But this season, there’s even a better chance as 13 of the 14 Member Clubs playing this season have NHL Draft picks on their rosters for the 2020-21 season. 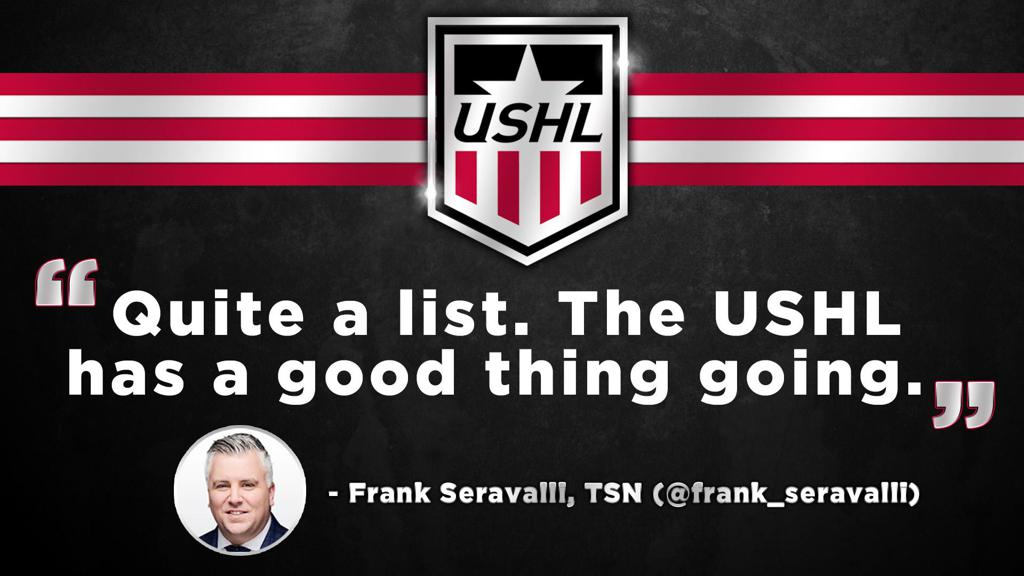 Among the names, you’ll find players with familiar last names -- including ones etched on the Stanley Cup, hockey’s highest honor -- alongside names that are both new to the league and familiar to USHL fans from the last few seasons. 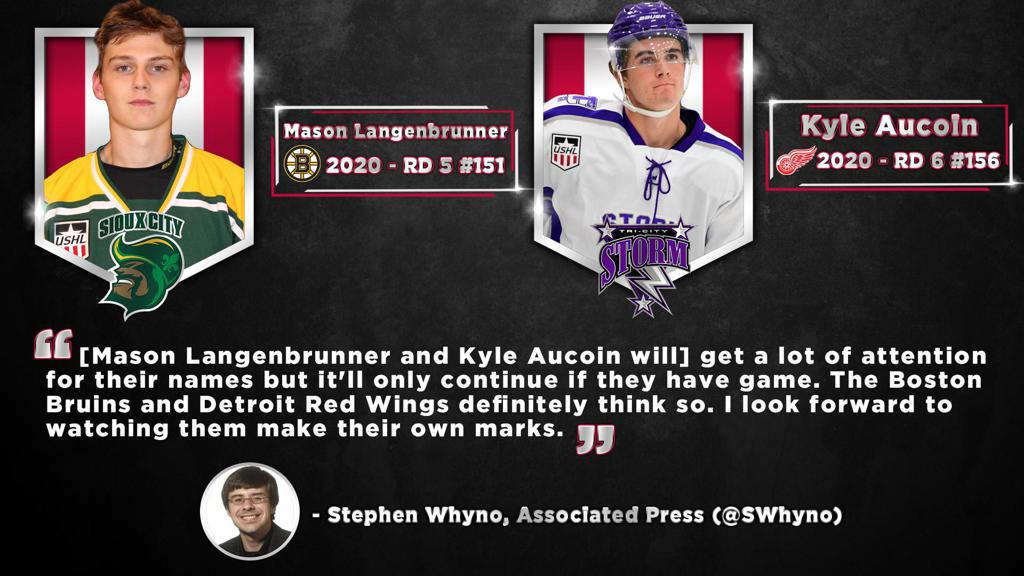 Mason Langenbrunner, an 18-year-old defenseman from Dallas who is committed to Harvard University, joins the Sioux City Musketeers after two seasons of high school hockey in Minnesota. The Boston Bruins prospect (2020, Round 5, #151) is looking to make it to the NHL to follow in his father Jamie’s footsteps, a forward who played for 18 seasons in the NHL and won a pair of Stanley Cups as a forward, first with the Dallas Stars (1998-99) and lastly with the New Jersey Devils (2002-03). 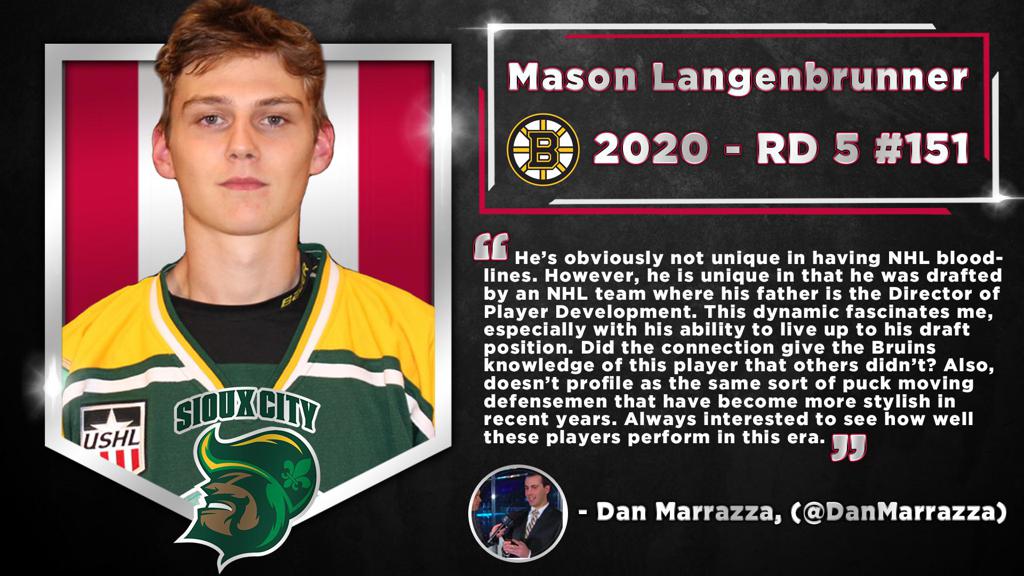 Like Langenbrunner, Kyle Aucoin has a last name that is recognizable in the hockey world as he’s the son of 18-year NHL veteran Adrian Aucoin. Kyle, a Detroit Red Wings prospect (2020, Round 6, #156), returns to the USHL appeared in 55 games with the Tri-City Storm heading into the 2020-21 season and had 13 points (2-11-13) in that span. The Ottawa, Ontario native is committed to Harvard University. 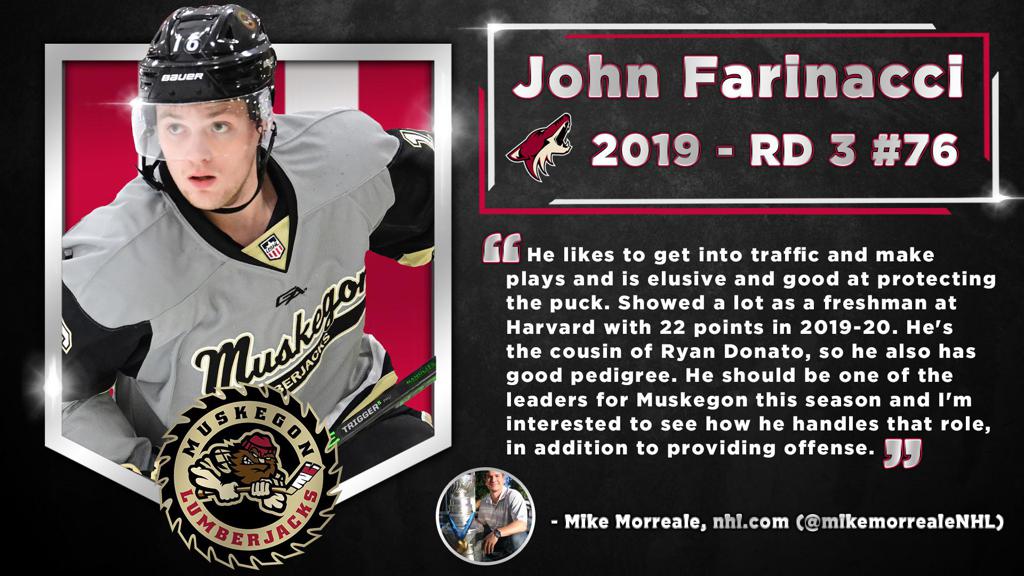 John Farinacci returns to the USHL to join the Muskegon Lumberjacks after putting up 22 points (10-12-22) in 31 games during his rookie season at Harvard. The 19-year-old forward returns to the USHL, where he played for both the Lumberjacks and USA Hockey National Team Development Program (NTDP) from 2017-19. Farinacci, who was drafted by the Arizona Coyotes during the 2019 NHL Draft (Round 3, #76), is the nephew of Harvard Head Coach and 13-year NHL veteran Ted Donato. Ted is the father of Ryan Donato, Farinacci’s elder cousin, who played for the Omaha Lancers (2014-15) and also attended Harvard before making it to the NHL and appearing in games with the Bruins, Minnesota Wild and now the San Jose Sharks. 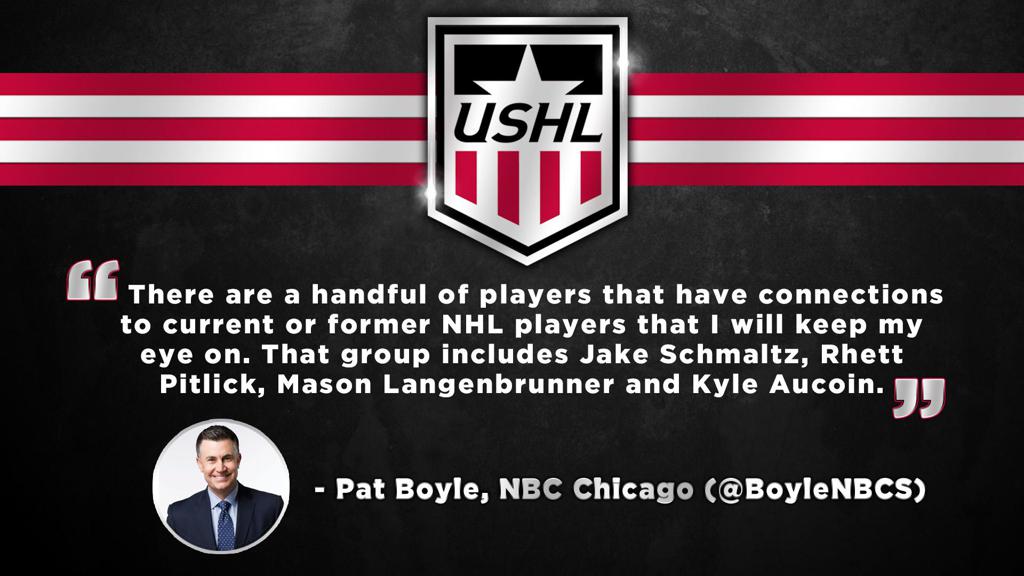 The Muskegon forward will be joined on the offensive side of the Lumberjacks by fellow 2019 NHL Draft pick Rhett Pitlick (Montreal Canadiens, Round 5, #131). The Chaska High product is in his third season in the USHL and returns to Muskegon where he manufactured 31 points (13-18-31) in 28 games with the team last season. Prior to that, the University of Minnesota commit played in 24 games for Omaha and picked up a combined 16 points (5-11-16). Pitlick has a plethora of family with NHL experience as his father played in the league for eight seasons while his brother Rem (Nashville) and cousin Tyler (Arizona) are both part of NHL rosters. 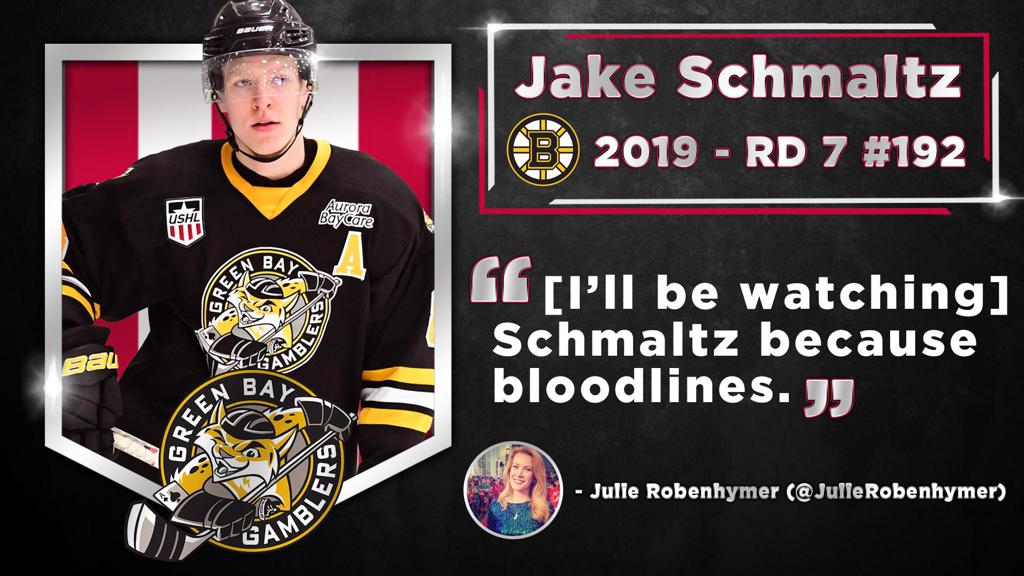 Jake is currently the third brother following along the Schmaltz blueprint to success, which has been perfected by older brothers Jordan (27) and Nick (24). Jake, a 19-year-old forward, is currently on step three of the seemingly five-step program. Step one, successful youth hockey stint. While Jordan and Nick played for the Chicago Mission, Jake had two big seasons at Madison Edgewood Prep, collecting 100 points (43-57-100) in 48 games. Then came step two, move on to the USHL. Despite the fact that Jordan (Sioux City) and Jake (Chicago Steel) didn’t start in Green Bay, all three brothers would end up playing for the Gamblers. All three brothers completed step three hot off the heels of a great USHL season, get drafted. Jake was selected by the Boston Bruins (2019, Round 7, #192) while Jordan (St. Louis Blues, 2012, #25) and Nick (Chicago Blackhawks, 2014, #20) were both First Round selections. Jake now focuses on a third USHL season, which has started well with eight points (5-3-8) in six games, before turning his attention to University of North Dakota where Jordan and Nick both spent multiple seasons. The final step? Skate in the NHL.

The majority (21) of the 29 NHL Drafted players all fall into the same category: returning players. Aucoin, Farinacci, Pitlick and Schmaltz all fit the description, as do the following 16 players.

Schmaltz will be joined in Green Bay by a pair of returning players including defenseman Mason Lohrei (Boston, 2020, Round 2, #58) and forward Jackson Kunz (Vancouver Canucks, 2020, Round 4, #113). Lohrei, an Ohio State University, is off to a great start in 2020, earning USHL Defenseman of the Week honors during Week 4 of the USHL season and now has points in all six of his games this season. Kunz, a North Dakota commit, doubled his career goal total (2) in the first game this season and has five points through the first six games. 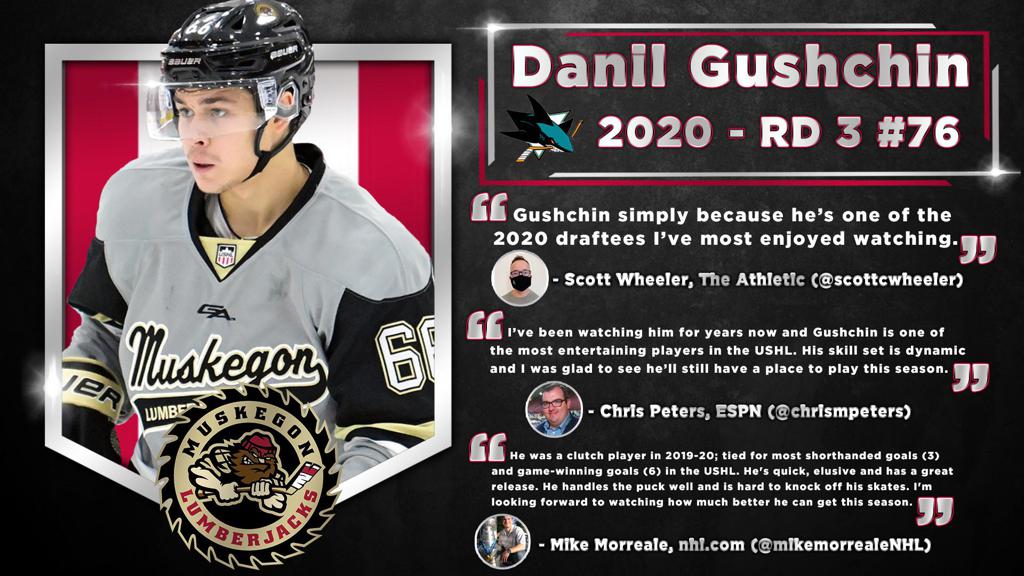 Danil Gushchin should be one of the more recognizable names for USHL fans among the returning players this season. The Lumberjacks forward earned a spot on the All-USHL Third Team last season after putting up 47 points (22-25-47) in 42 games. Gushchin, who was selected by the Sharks in the 2020 NHL Draft (Round 3, #76 overall), is off to a great start this season with nine points (5-4-9) in four games, including a four-point night (3-1-4) on November 14. Gushchin, who has three multi-point games in four appearances this season, now has 92 points (43-49-92) in 97 career USHL contests.

One of the most popular moments of the 2020 Draft was captured by the Lincoln Stars as defenseman Jake Boltmann was swarmed by teammates during practice after being selected 80th overall by the Calgary Flames. 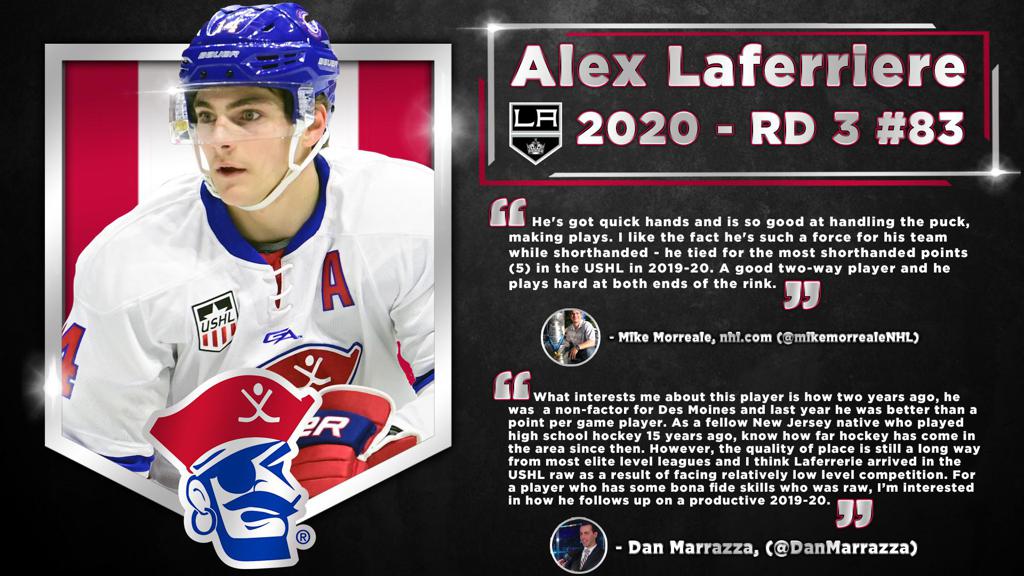 The Des Moines Buccaneers will return a trio of drafted skaters, including forwards Alex Laferriere and Lucas Mercuri, as well as defenseman Noah Ellis. Laferriere was taken by the Los Angeles Kings (Round 3, #83 overall) after a great 2019-20 season that saw the Harvard commit put up 45 points (19-26-45) in 42 games. The Chatham, N.J. native earned USHL Forward of the Week honors once as well as represented the United States at the World Junior A Challenge and the USHL at the 2020 BioSteel All-American Game where he scored a goal. Mercuri appeared in a trio of games with the Bucs last season before being taken by the Carolina Hurricanes (2020, Round 6, #159 overall). The University of Massachusetts commit has opened the 2020-21 season on a four-game point streak for a total of six points (1-5-6) in five games. Ellis (Vegas Golden Knights, 2020, Round 6, #184) rounds out the Des Moines prospects and, like Mercuri, is a UMass commit off to a fast start this year with four points (1-3-4) through five games. 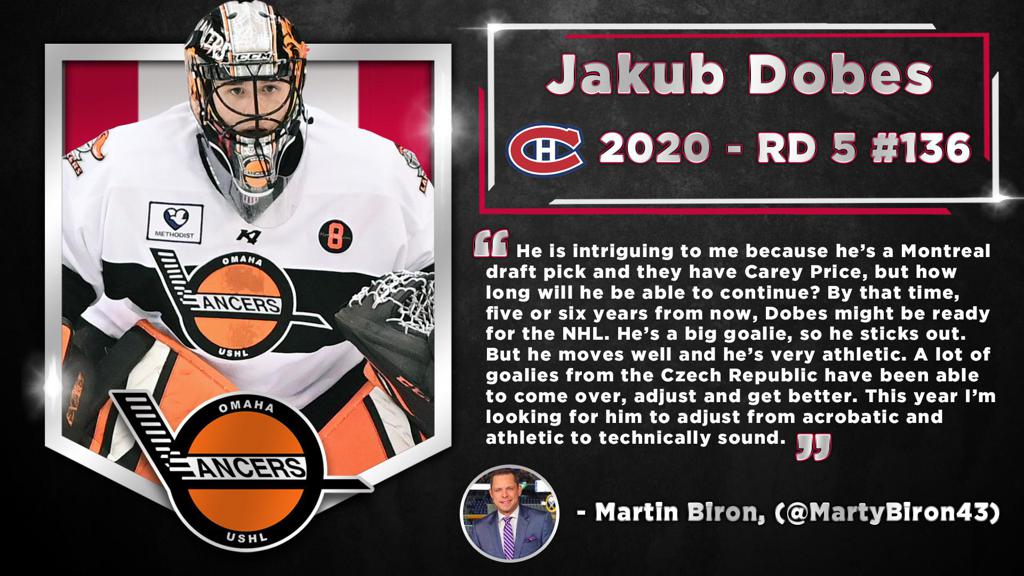 Jakub Dobes, the Week 3 USHL Goaltender of the Week, was selected by the Montreal Canadiens (Round 5, #136) after making his league debut in Omaha last season and finishing the season with a 9-6-3-0 record, 3.09 goals against average and 0.891 save percentage in 21 games. The Ohio State commit is off to a 4-2-0-0 start this season and now holds a USHL career 2.75 goals against average and 0.900 save percentage.

Eastern Conference foes Dubuque Fighting Saints and Youngstown Phantoms also welcome back a player each as Los Angeles defensive prospect Braden Doyle and Boston forward prospect Riley Duran return to the league. Doyle, a Boston University commit, earned a spot on the All-USHL Third Team last season after packing away 32 points (7-25-32) in 48 games while Duran, who is committed to Providence College, returns to the Phantoms after making his USHL debut in the 2018-19 season. 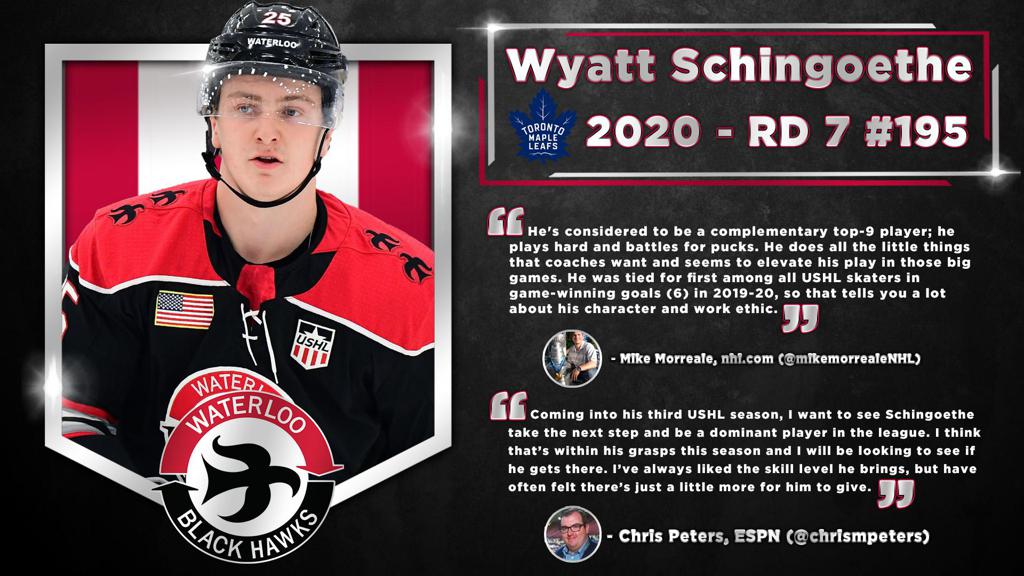 One of the leading scorers on last season’s Waterloo Black Hawks squad, Wyatt Schingoethe, returns to the roster after hearing his name called by the Toronto Maple Leafs (Round 7, #195) at the 2020 Draft. The University of Denver commit racked up 38 points (17-21-38) in 47 games last season, which was good for third on the team in scoring. It was the second-straight season for Schingoethe with 30-or-more points. 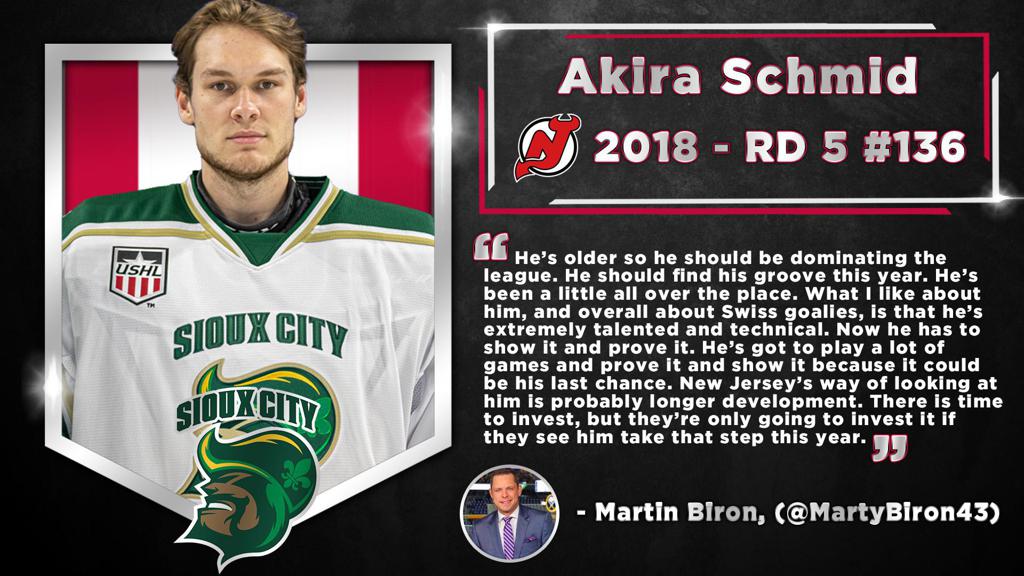 A pair of Musketeers joining Langenbrunner in Sioux City will be returning netminder Akira Schmid and forward Chase Bradley. Schmid is now in his third season in the USHL and after appearing in a game this season, the Devils prospect (2018, Round 5, #136 overall) holds a 21-21-3-0 record, 2.48 goals against average and 0.915 save percentage in 51 USHL appearances. On the offensive side, Bradley also returns to the league for a third season after spending the last two seasons with Omaha. The University of Connecticut commit and Detroit draft pick (2020, Round 7, #203) has registered an assist in each of the three games with the Musketeers this season. 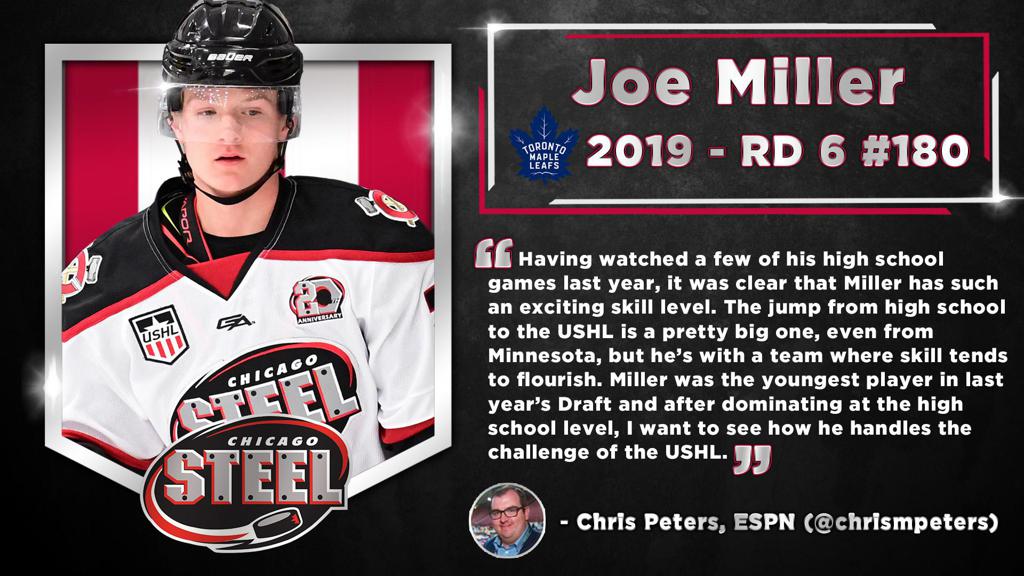 Chicago forwards Joe Miller and Sean Farrell round out the list of USHL returners. Miller, a Toronto Maple Leafs (2020, Round 6, #180) prospect and Minnesota commit, appeared in a game for the Steel during the 2018-19 season before returning to the team ahead of this season. Farrell returns for his second season with the Steel and fourth in the USHL and is already off to a hot start with 11 points (5-6-11) in his first six games of the season. The Canadiens prospect now has 106 points (33-73-106) in 112 games between the NTDP and Steel. Ahead of being drafted this summer, the Hopkinton, Mass. native appeared in the World Junior A Challenge where he won a Bronze medal and was named the WJAC Star of the Day for his December 7, 2019 performance. Farrell planned to attend Harvard this fall, but because of the COVID-19 restrictions, he returned to the Steel. 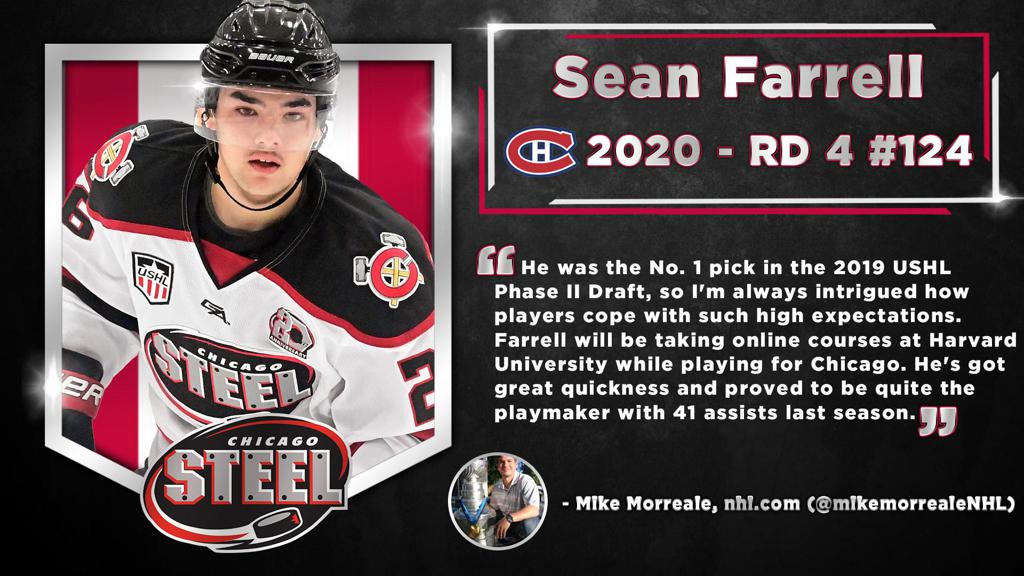 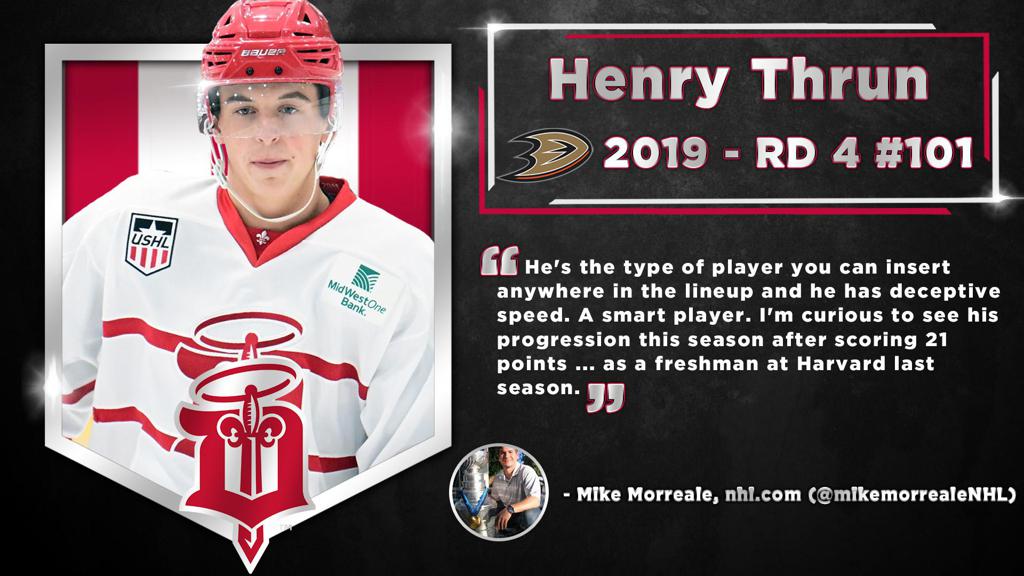 Like Farrell, Dubuque defenseman Henry Thrun and Fargo Force forward Austin Wong have turned to the USHL as Harvard University’s season is on hold. Thrun (Anaheim Ducks, 2019, Round 4, #101) returns to the league with the Fighting Saints after spending 2017-19 with the NTDP, where he picked up a combined 43 points (7-36-43) in 62 games. Wong, who was selected by the Winnipeg Jets at the 2018 Draft (Round 7, #215), made his debut in the USHL this season with the Force and collected four points (2-2-4) in his first three league games.

NEW KIDS ON THE BLOCK 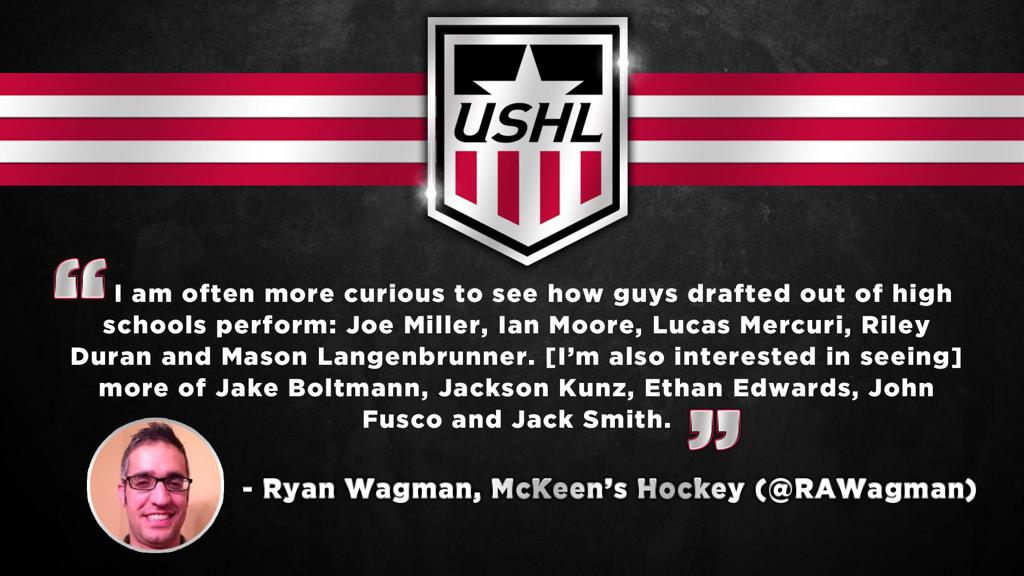 Six USHL newcomers heard their name called at the NHL Draft this summer before making their league debut. 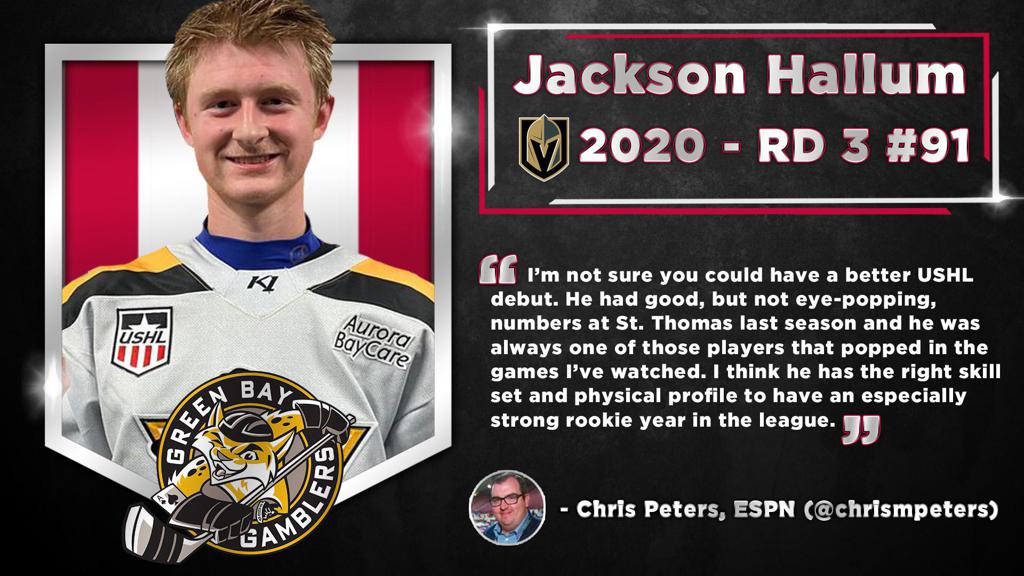 Chicago’s Ian Moore and Green Bay’s Jackson Hallum were both selected in the third round with Moore coming off the board 67th to Anaheim while Hallum was picked 91st overall by Vegas. Moore, a Harvard commit, registered 46 points (12-34-46) in 28 games at St. Mark’s School last season from the blue line. The Concord, Mass. native racked up 96 points (29-67-96) in three seasons at the Massachusetts prep school. Meanwhile in Minnesota, Hallum collected 35 points (18-17-35) in 25 games at St. Thomas Academy during his junior season. Golden Knights fans rejoiced when Hallum made his USHL debut on November 25 and recorded a hat trick to help his Gamblers beat Moore’s Steel 7-4.

Sioux Falls Stampede forward Jack Smith was also drafted out of Minnesota after his junior year at St. Cloud Cathedral where he recorded 30 points (16-14-30) in 11 games before putting up 19 points (10-9-19) in six playoff contests. The University of Minnesota Duluth commit scored a goal in his USHL debut and also recorded an assist in back-to-back games just a week later. 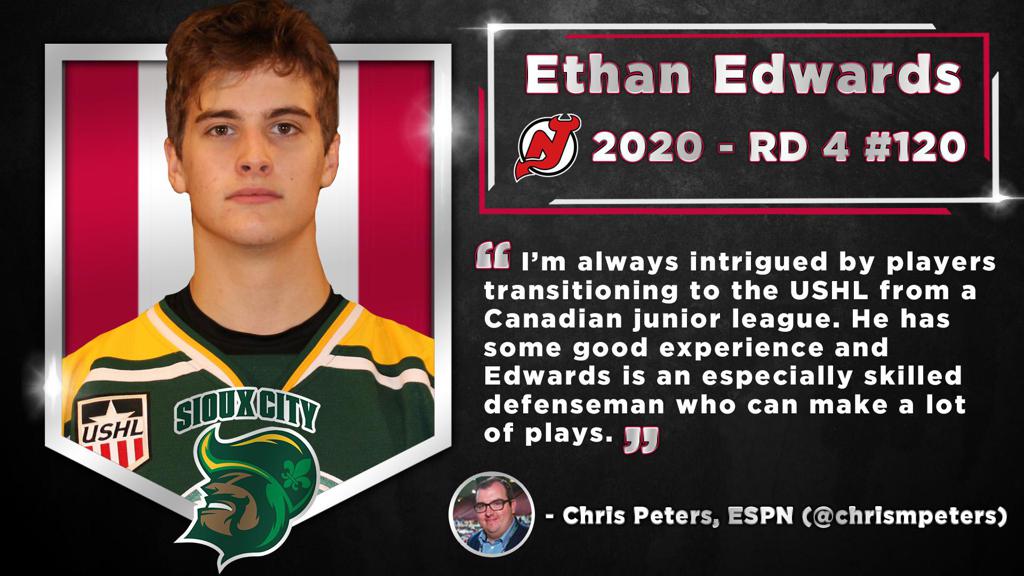 The Musketeers welcome a trio of USHL newcomers, including fourth round NHL selections Ethan Edwards and Daniil Chechelev as well as seventh round NHL pick John Fusco. Edwards, a University of Michigan commit and Devils prospect (#120 overall), was drafted after playing for the Spruce Grove Saints (AJHL) and is searching for his first USHL point after his first three games of the season. Chechelev, a Calgary Flames prospect (#96 overall) has yet to appear in a game for Sioux City but holds a 10-1-0 record with Russkie Vityazi Chekhov (MHL) this season and a 2.00 goals against average with a 0.938 save percentage. Fusco, a Maple Leafs prospect, is also waiting to make his league debut. The Harvard commit served as captain of the Dexter Southfield School and had 31 points (10-21-31) in 24 games his junior season before being selected. 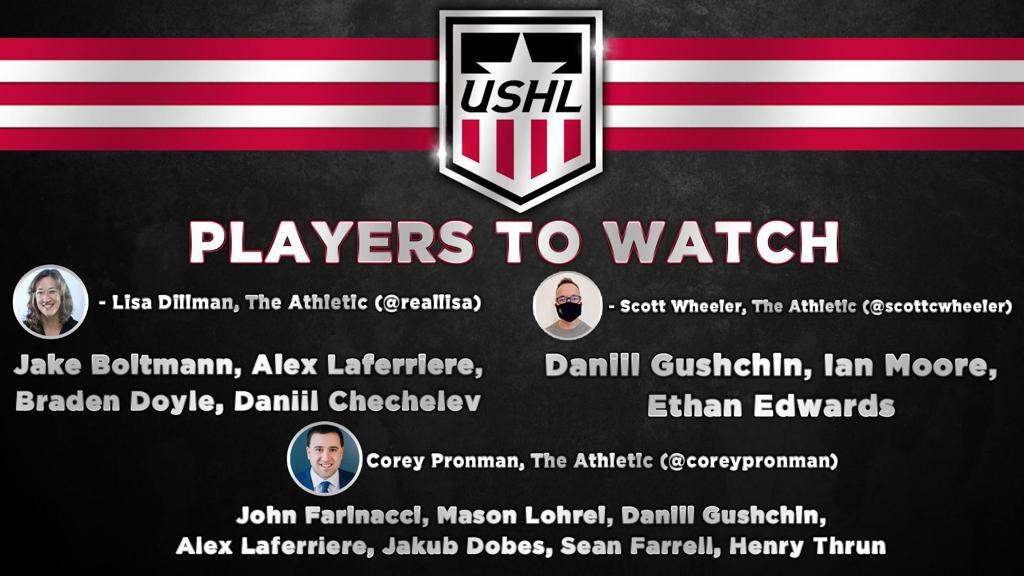 15 - Different NHL teams players have been drafted by

11 - Different Division I colleges USHL players are committed to 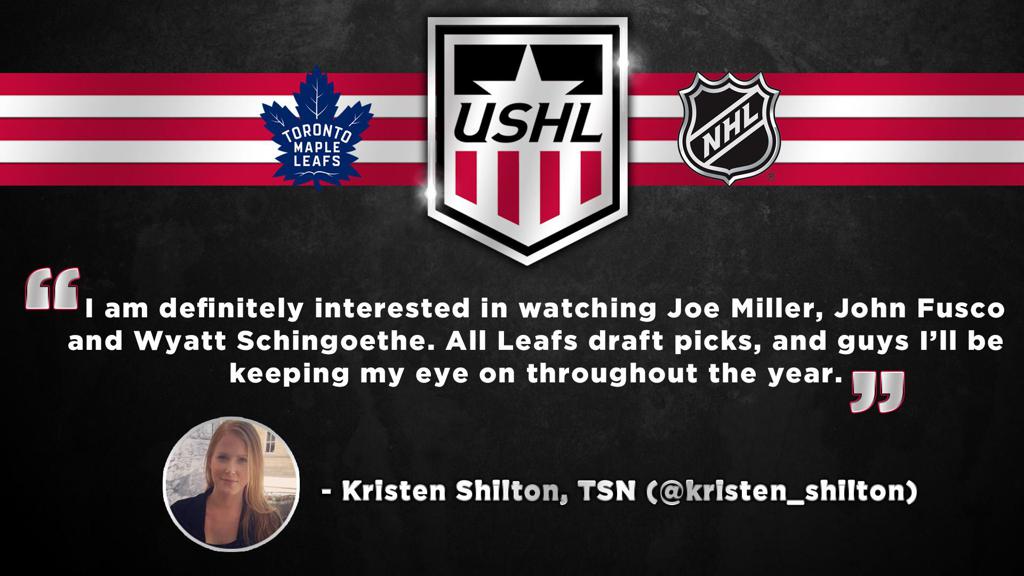