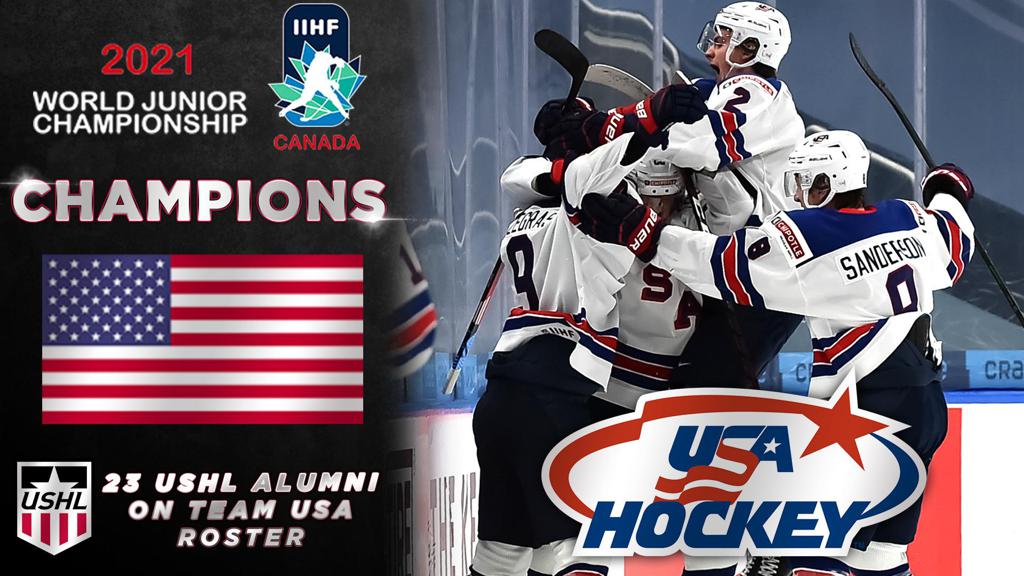 The United States Hockey League (USHL) had a combined 23 former and current players win a 2021 IIHF World Junior Championship Gold Medal Tuesday night with the United States as the team picked up a 2-0 win over Canada.

The United States was by spectacular tournament performances from forward Trevor Zegras (USA Hockey National Team Development Program) and goaltender Spencer Knight (NTDP). Zegras, an Anaheim Ducks prospect (2019, Round 1, #9), led the tournament with 18 points (7-11-18) en route to being named the tournament MVP. Florida Panthers prospect (2019, Round 1, #13) Knight was nearly lights out between the pipes for the United States, finishing the tournament with a 1.63 goals against average and 0.940 save percentage with a trio of shutouts, including in the Gold Medal win. Knight set a new USA Hockey record for most shutouts in a single World Juniors tournament (3) and World Juniors career (3).

Zegras led the way Tuesday night with a pair of points (1-1-2), tying him for the Team USA all-time record for career WJC points (27) and assists (20) while Knight denied all 21 shots Canada sent his way.

Fellow non-NTDP skaters who had great tournaments for the red, white, and blue include Bobby Brink (2-4-6) and Ryan Johnson (1-3-4). Brink, who appeared in USHL games for the Sioux City Musketeers and NTDP, is a Philadelphia Flyers prospect (2019, Round 2, #34) who was near the top of the United States scoring leaders with his six points. Johnson, a Sioux Falls Stampede alumnus, former USHL Clark Cup Champion and Buffalo Sabres prospect (2019, Round 1, #31), meanwhile, was one of the best offensive defensemen for the United States.

While the USA roster was composed primarily of current or former USHL skaters, 23 of the 25 rostered players, the USHL also had a combined eight alumni appear in games for Finland, Russia, Slovakia, Germany and Switzerland.

Simon Latkoczy and Samuel Hlavaj combined for five appearances between the pipes for Slovakia. Madison Capitols alumnus Latkoczy had a superb 0.922 save percentage and 2.61 goals against average despite finishing with a losing record (1-2-0-0) while former Lincoln Stars netminder Hlavaj appeared in a pair of games for his country.

Germany and Switzerland each had a USHL alumni on their roster as forward Manuel Alberg and defenseman Cedric Fiedler represented their respective countries. Former Des Moines Buccaneers Alberg posted a pair of points (0-2-2) in five games for Germany while Fiedler skated in four games for Switzerland.

After coming into the WJC as the sixth-ranked team, based on the final rankings of the 2020 IIHF World Junior Championship, the United States won Group B after suffering its lone loss to Russia (3-5) in the opening game of the Preliminary Round before shutting out Austria (11-0), Czech Republic (7-0) and Sweden (4-0). The United States then moved on to the Quarterfinals where they beat Slovakia 5-2 before holding off a late rally from eventual Bronze Medalists Finland in a 4-3 Semifinals matchup. The United States is now 4-1 against Canada all-time in WJC Gold Medal games, including wins in 2021, 2017, 2010 and 2004. Knight’s shoutout was also the first during a Medal Round game in USA history.

The USHL is currently in the middle of its 19th season as the nation’s only Tier I junior hockey league. Fans can watch all USHL games on HockeyTV and should reach out to any of the 14 Clubs participating in the 2020-21 USHL season to see how you can watch the future stars of the NCAA and NHL this season.