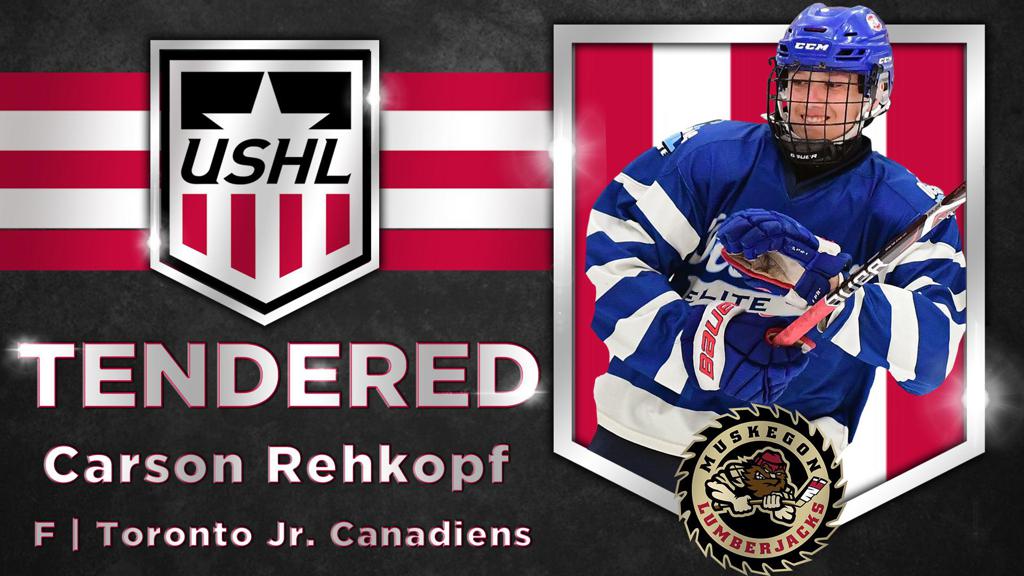 The 2005-birthyear stands 6-foot-3 and weighs in at 185 pounds, making him a menacing physical presence at just 16 years old. Carson Rehkopf hails from Utopia, Ontario, and is the second Muskegon Tender from Ontario in the last two years (Owen Mehlenbacher).

“Growing up in Ontario, being surrounded by the OHL, that's all I ever knew or followed,” said Rehkopf. “Up until this year, I didn't know much about the USHL and what the league does for its players. Once I was educated on the league and Muskegon's program, I felt the program was the best fit for me as a player and person. From the coaching staff to the fans, I feel that Muskegon has the best environment for players who want to succeed at the next levels.”

Muskegon’s front office is thrilled to have Rehkopf signed, and per the agreement, Carson will appear in at least 55 percent of Muskegon’s regular-season games next year.

“We are very excited as an organization that we can sign a player of Carson’s potential and caliber,” said President of Hockey Operations Steve Lowe.

“We expect Carson to make an impact from day one in the USHL and we can't wait to get him in our lineup. He has size, elite skill, top-end skating ability, and a compete factor that players his age don't have. These tools make Carson a deadly threat as he grows into his skill set and body. For a player of his potential to understand what the USHL and the Muskegon Lumberjacks can provide is extremely mature, and his decision to play here is a well-thought-out one. We couldn't be more excited as an organization.”

“Carson is an unbelievable kid,” said General Manager Jim McGroarty. “His teammates love him and his coaches love to coach him. Carson has put himself in the elite category of his age group with his high IQ, skating and skill development.”

“Carson has proven to be a threat in every game we have watched him play, and his personality stands out. His humbleness, character, and desire to improve every day make him the type of player we want in our organization. We are looking forward to watching him grow as a player during his time in Muskegon.”

Head Coach Mike Hamilton is excited to work with such a high-caliber player.

“I have gotten to know Carson and he’s a great kid with a great family,” said Hamilton. “They’re the type of people we want to surround ourselves with and bring into our organization. Getting a player of this caliber is not only important for us, but also for the league. We want to attract players that have NHL-level talent and that’s what we’ve got in Rehkopf.”