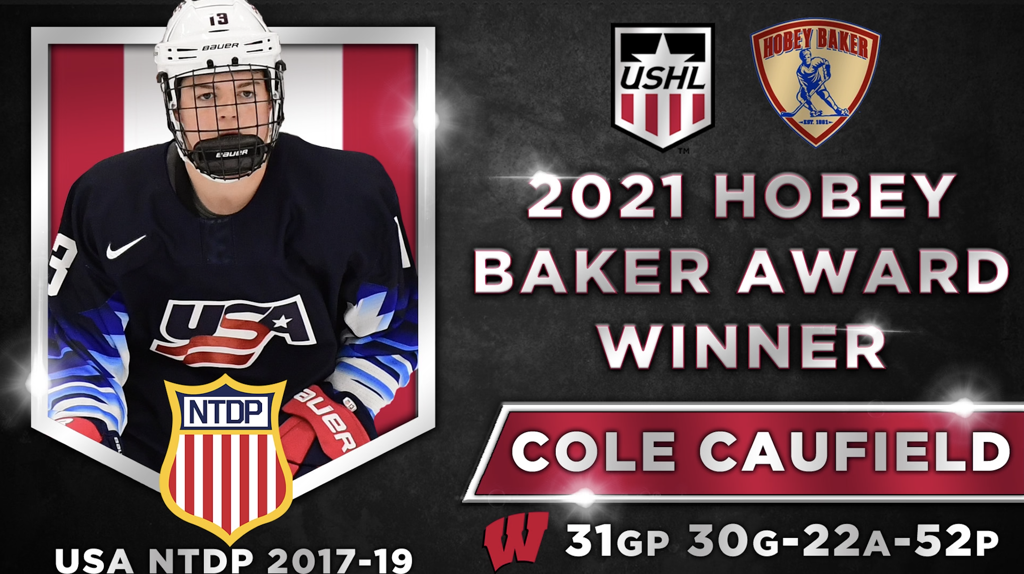 Caufield is the 14th USHL alumnus to win the Hobey Baker Award, second in-a-row (Scott Perunovich, 2019-20), and fourth in the last five seasons (Adam Gaudette, 2017-18; Will Butcher, 2016-17). Caufield, who is currently a forward with Laval Rocket (AHL), is the fifth of 14 USHL winners to play for the NTDP and first since Butcher's win.

Caufield, who had 52 points (30-22-52) in 31 games this season with Wisconsin, was part of the regular season Big Ten championship squad and was also named Big Ten Player of the Year before earning a spot on the conference's First Team. The Stevens Point, Wis. native also earned a spot on the Big Ten All-Tournament Team and won a Gold Medal with Team USA at the World Juniors before earning an NCAA West First Team All-American honor.

In two seasons with the University of Wisconsin, Caufield tallied 88 points (49-39-88) in 87 games. On the same night he won the Hobey Baker Award, Caufield made his professional hockey debut with Laval as he scored a pair of goals and notched an assist in a three-point night (2-1-3). Caufield was drafted by the Montreal Canadiens in the 2019 NHL Draft (Round 1, #15 Overall).

Thomas Bordeleau, a first year forward for the University of Michigan, won the 2021 Tim Taylor Rookie of the Year award. Bordeleau was a forward for the NTDP for the previous two seasons (2018-20) where he registered 40 points (17-23-40) in 53 games. This season with Michigan, Bordeleau registered 30 points (8-22-30) in 24 games for the Wolverines en route to earning a spot on the Big Ten All-Rookie Team, All-Big Ten Second Team and being named Big Ten Rookie of the Year. The forward is a San Jose Sharks prospect after being drafted during the 2020 NHL Draft (Round 2, #38 Overall).