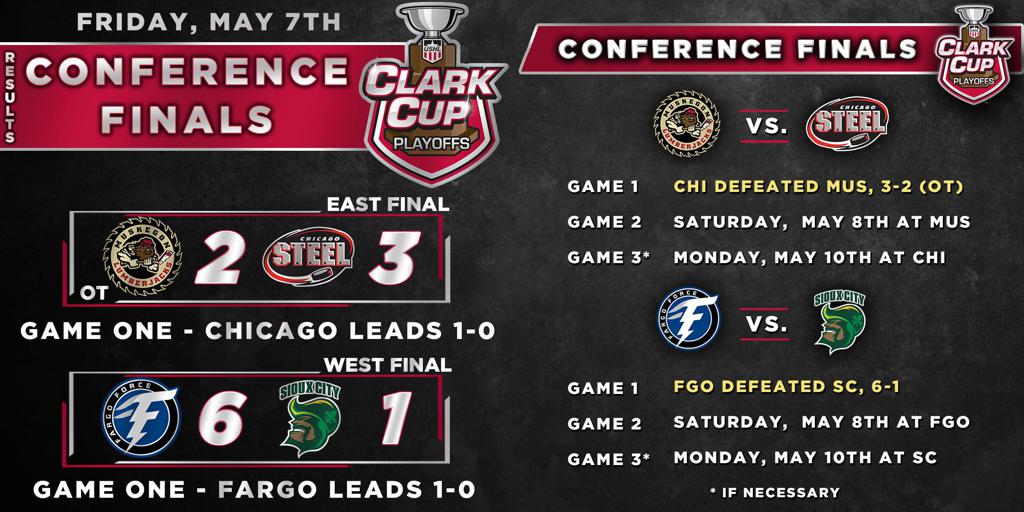 The Fargo Force scored early and often on the road in Game One of the Western Conference Final. Force forward Jake Braccini found the back of the net for his first goal of the night. The University of Minnesota commit wound up finishing off a hat trick with a pair of goals in the second period, the second Clark Cup Playoff hat trick in Fargo franchise history after Chase Grant potted a trio of goals on April 21, 2010 in a 4-3 win over the Omaha Lancers. Braccini was named the First Star of the game, followed by teammates Aaron Huglen (1-1-2) and Jack Peart (0-2-2). Fargo netminder Brennan Boynton earned the win by turning aside all 13 shots he faced in the first 24 minutes of the game before Andrew Miller took over and stopped 18 of the 19 Musketeers shots he faced in the final 36 minutes. Sioux City defenseman Ethan Edwards scored the lone goal for the Musketeers.

Muskegon Recap: Lumberjacks Fall in Overtime to Chicago in Game 1

While Muskegon jumped out to a pair of leads, the Steel were able to answer back both times before finding the overtime winner. Lumberjacks Alternate Captain Cameron Berg opened the scoring late in the first period for his third goal of the postseason. Late in the second period, Chicago forward Josh Doan and Muskegon forward Bradley Marek traded goals 2:33 apart in the final five minutes of the middle frame. Steel forward Adam Fantilli potted his second of the postseason eight minutes into the third period to send the game to an eventual overtime frame. At the 7:09 mark, Chicago forward Mackie Samoskevich found a wide open Matt Coronato in the crease who lifted his fourth goal of the postseason over Jan Skorpik for the overtime winner. Coronato (1-0-1) and Samoskevich (0-2-2) finished as the First and Third Stars while Steel netminder Simon Latkoczy (29 saves) was named Second Star of the game.