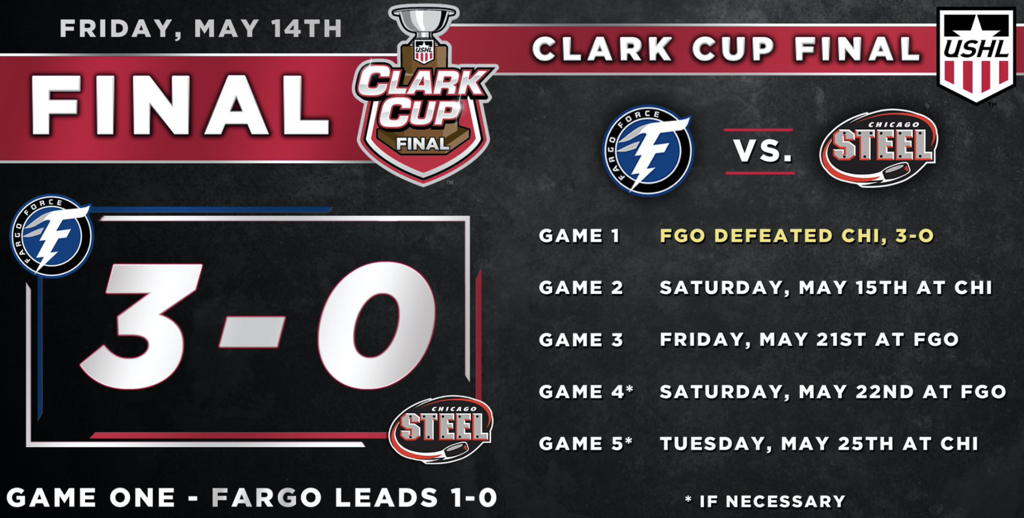 CHICAGO, Ill. – The 2021 Clark Cup Final opened Friday night at Fox Valley Ice Arena in Geneva, Ill. with the visiting Fargo Force controlling play in a 3-0 shutout win over the Chicago Steel to open the series.

Whenever you can get off to a good start, it helps your confidence,” said Fargo Force Head Coach Pierre-Paul Lamoreux. “Chicago has won the Anderson Cup two years in a row for a reason, they have a great team. Not having seen Chicago during the year, this instills confidence knowing we can play with those guys.”

The Force were backed by an unflappable 20-save performance from netminder Andrew Miller. The Minnesota State University commit has been nearly unbeatable in the Playoffs (2-0-0-0), with a 0.39 goals against average and 0.986 save percentage (72-73) in three appearances so far. Friday night’s series-opening shutout was his second-straight shutuout after the Boulder, Col. Native turned aside all 34 shots he faced in Game 3 of the Western Conference Final to send his team to the Final. Miller has held opponents off the scoreboard for a consecutive 89:04 dating back to the second period of Game 2 of the Western Conference Final.

“Miller has been a great teammate all year long and stayed ready and stayed prepared,” said Lamoreux. “That’s why we Drafted Andrew, we believed he was capable of being a starter and taking the net.”

Fargo forward Kyle Smolen opened the series scoring by finishing off a loose puck in the crease of Chicago’s Simon Latkoczy. Smolen’s first goal of the 2021 Clark Cup Playoffs would be reviewed by the referees but the goal call on the ice stood.

Later in the opening frame, Force defenseman Jack Peart sent home a big rebound off of a Matt Crasa shot to double the Fargo lead.

The Steel offense wasn’t able to find the back of the net despite a plethora of chances in the first and second periods with multiple pucks clanging off the post behind Miller.

Fargo received an insurance goal from Buffalo Sabres prospect (2019, Round 4, #102) Aaron Huglen who found room over the shoulder of Latkoczy on a delayed Steel penalty. Huglen, a University of Minnesota commit, has a trio of goals in the Playoffs.

Friday night’s loss was the first of the Clark Cup Playoffs for the Steel (4-1-0-0) and was the first time Chicago was shut out since April 6, 2019, a streak of 120 regular season and postseason games.

The teams will square off for Game 2 of the Clark Cup Final Saturday night at Fox Valley Ice Arena in another 7:05 p.m. CT puck drop.