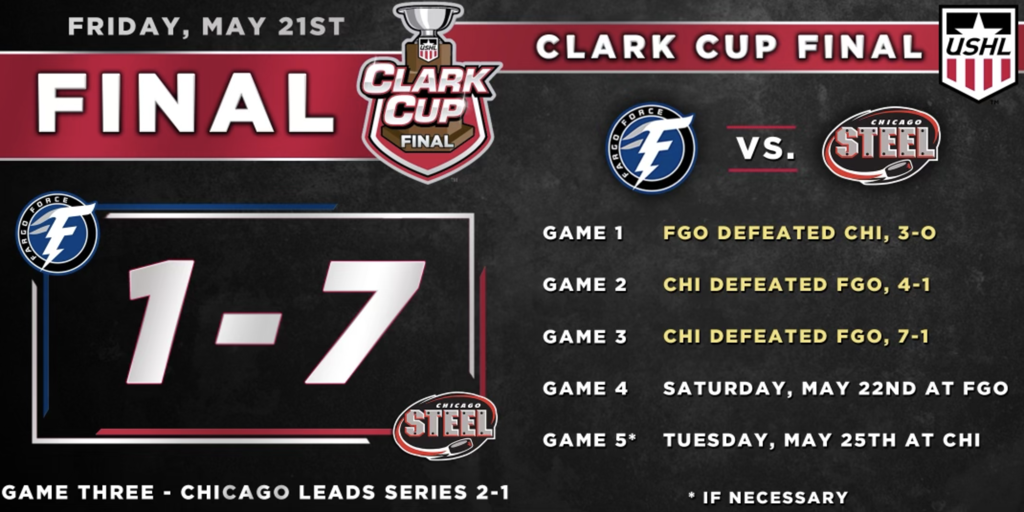 FARGO, N.D. – After splitting the first two games of the Clark Cup Final on home ice last weekend, the Chicago Steel took a 2-1 series lead with a 5-1 win Friday night at Scheels Arena in Fargo, N.D., giving them the opportunity to earn their second Clark Cup Championship Saturday night.

The teams traded goals just 13 seconds apart midway through the first period to open the scoring in Game Three. Steel forward Matthew Coronato finished off a perfect tic-tac-toe passing play from Erik Middendorf and Sean Farrell on the powerplay for his first goal of the night. On the ensuing shift, Fargo forward Cody Monds potted his fourth of the Playoffs after a net-front scramble in front of Chicago netminder Simon Latkoczy.

Chicago’s eventual game-winning goal came with less than a minute to play in the opening period off the stick of Middendorf. The Steel added a pair of insurance goals in the second period as Coronato scored his second of the night followed by Josh Doan’s second goal of the Playoffs.