Individual releases, written by the winning player's Club, included below. 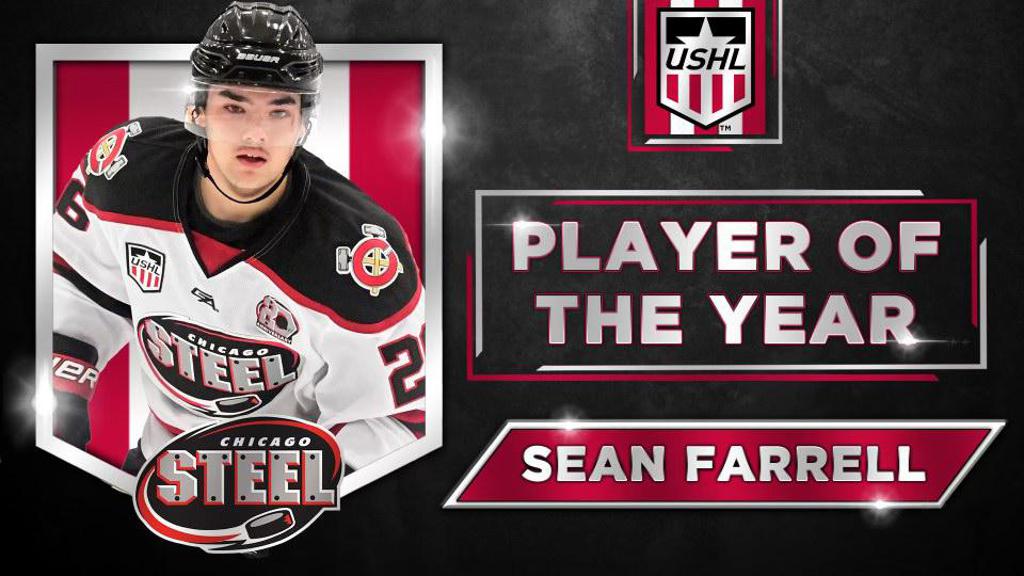 Player of the Year: Sean Farrell

Chicago Steel forward Sean Farrell was named 2021 USHL Player of the Year, announced by the league on Monday.

Farrell is the second Steel player to earn the Player of the Year award, joining Andrew Miller who earned the honor for the 2008-2009 season.

“Sean had one of the best, if not the best season in USHL history and is much deserving of this award,” said Steel head coach Brock Sheahan. “Sean is an amazing hockey player and an even better person. We have been so lucky to have Sean as a part of this group the last two seasons and I couldn’t be more proud of the player and person he is. He had a great Junior career and I know that he will continue to develop and grow as a player moving forward and I am excited to follow the rest of his career.”

The Harvard University-bound forward registered at least a point in 24 consecutive games from Nov. 25, 2020 through Feb. 11, 2020, the longest single-season point streak in USHL history with 15 goals and 25 assists over that stretch.

In the playoffs, Farrell helped the Steel win the 2021 Clark Cup title, accumulating 10 points (2G, 8A) in the eight-game championship run.

In addition to the USHL single-season point streak mark, Farrell, a native of Hopkinton, Mass., re-wrote the Steel record book during the 2020-2021 regular season.

The 5-foot-10, 177-pound skater now owns franchise marks for both points and assists in a career and a single season. Farrell tallied 101 points including 72 helpers during the 2020-2021 season for the single-year records, adding to his career totals of 157 points and 113 assists in a Steel uniform.

Farrell was named USHL Forward of the Week three times this season, the most of any skater in the league. 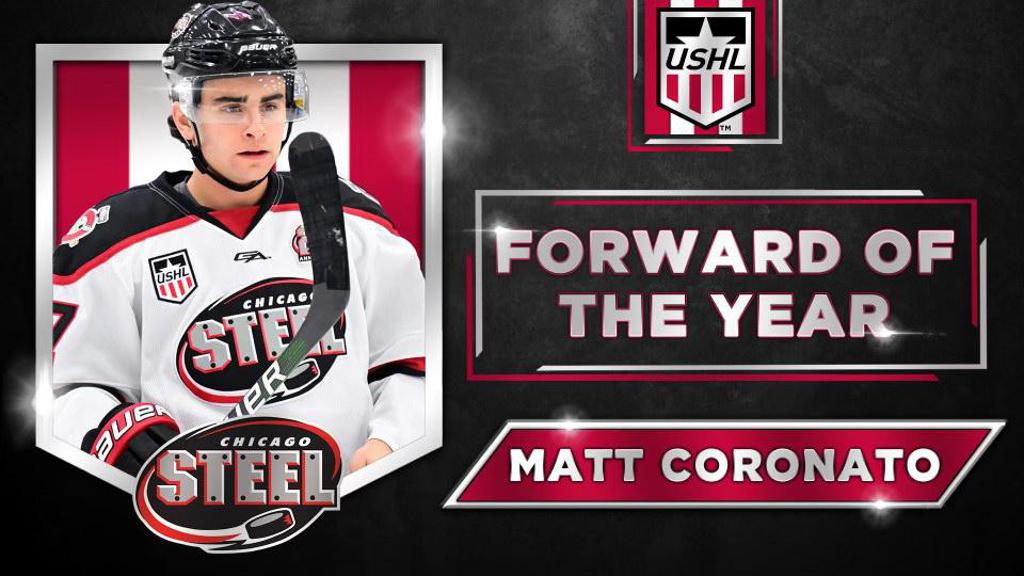 Forward of the Year: Matt Coronato

Coronato, a Harvard University commit, led the league with 48 goals and added 37 helpers in 51 games played during the 2020-2021 season. The forward led all USHL skaters in postseason points with 13 (9G, 4A) in eight Clark Cup Playoffs games, helping lead the Steel to the club’s second Clark Cup title in franchise history.

Coronato scored an average of 0.94 goals per game, the most of any USHL league leader in goals in the Tier 1 era.

“As a staff and organization, we are so proud of Matt and the season he had,” said Steel head coach Brock Sheahan. “Scoring goals in the USHL is very difficult and Matt made it look easy this year. We have been so fortunate to have him as a part of this organization as both a player and a person. Matt has grown so much as a player and I couldn’t be more proud of him. Matt is just starting his hockey career and I can’t wait to see him continue to grow as a player.”

Coronato is the second Steel player to earn the Forward of the Year award, joining Andrew Miller who earned the honor for the 2008-2009 season.

The 5-foot-10, 180-pound skater won the goal-scoring title by a 16-goal margin over Steel teammate Erik Middendorf and Muskegon Lumberjacks forward Danil Gushchin who each potted 32 markers.  The 16 goal difference was the largest margin of any league leader in goals in USHL history.

Coronato is the most prolific goal scorer in Steel franchise history, setting the record for goals in a single season in a Steel uniform (48) during the 2020-2021 campaign and most markers in a career (66).

The forward from Huntington, N.Y., was ranked ninth among North American skaters on NHL Central Scouting’s most recent watch list for the 2021 NHL Draft, released on May 27. Steel alum Brendan Brisson currently ranks as the highest former Steel forward selected in the draft, chosen in the first round (#29 overall) by the Vegas Golden Knights in the 2020 NHL Draft. 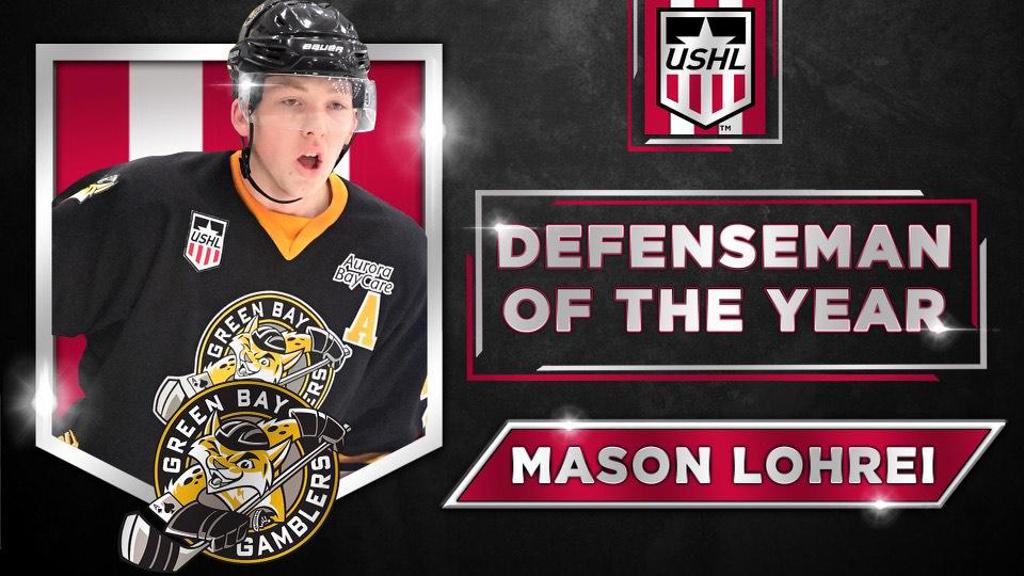 Defenseman of the Year: Mason Lohrei

Lohrei led all USHL Defenseman in goals (19), assists (40), points (59) and game winning goals (6). The Verona, Wisconsin native was named USHL Defenseman of the Week five times over the course of the season.

Lohrei’s 59 points set a franchise record for points in a season by a defenseman.  Lohrei finished his USHL career second all-time among Gambler defenseman in goals (27), assists (69) and points (96).

“Mason has been a great two-way player for our organization,” says Gamblers Head Coach/General Manager Pat Mikesch.  “Along with being one of the most dynamic defensemen in the USHL, Mason was also a great leader off the ice.  I look forward to following his progression at Ohio State and eventually the NHL.”

Lohrei, who will be a freshman at Ohio State in the fall, was selected in the 2nd round of the 2020 NHL Draft by the Boston Bruins. 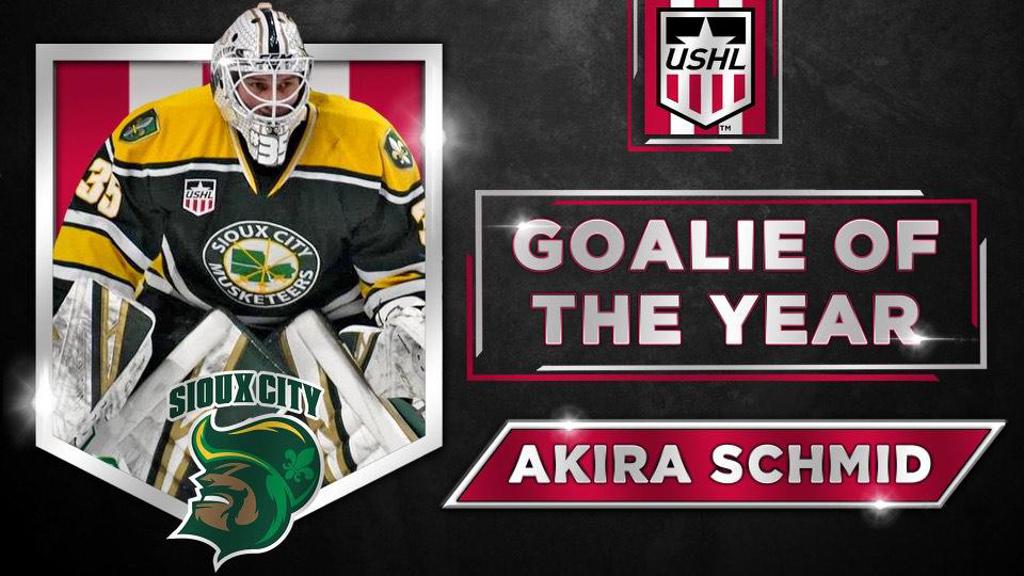 Goaltender of the Year: Akira Schmid

Sioux City Musketeers goaltender Akira Schmid has been recognized as the 2020-21 United States Hockey League Goaltender of the Year.

The Bern, Switzerland, native appeared in 36 games and finished the season with a 22-13-1 record. Schmid posted the USHL’s best goals against average (2.01) and save percentage (.921) to go along with three shutouts, tied for the league lead.

Schmid, who was selected 136th overall by New Jersey in the 2018 NHL Draft, signed an entry level contract with the Devils in late May. 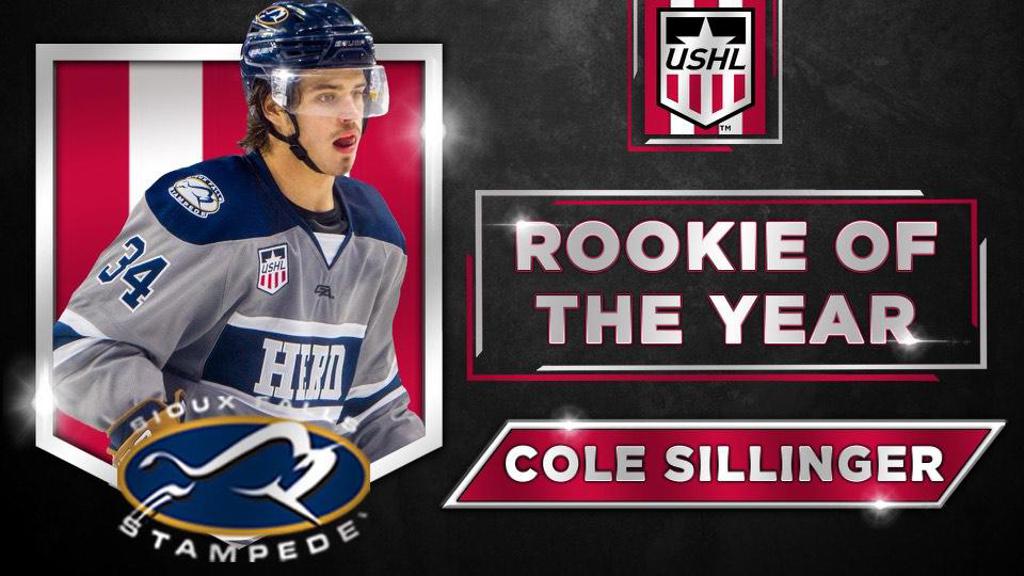 Rookie of the Year: Cole Sillinger

The Sioux Falls Stampede and United States Hockey League (USHL) announced Monday forward Cole Sillinger was named the 2020–21 USHL Rookie of the Year as determined by a vote of League coaches and general managers.

Sillinger appeared in 31 games for the Stampede, producing 46 points on 24 goals and 22 assists. He joined the team on loan from the Medicine Hat Tigers (WHL) on January 10 due to coronavirus restrictions in Canada. His 24 goals and 1.48 points per game were the highest among rookie skaters in 20 or more games played.

The Regina, Saskatchewan, native recorded a 14-game point streak between February 19 and March 27, tallying 12 goals and 11 assists over that time span. Sillinger is considered a top prospect for the 2021 NHL Draft.

Sillinger becomes the fourth player in team history to win the award with forward Kieffer Bellows as the most recent winner after his performance over the 2014–15 season. Jack Connolly (2007–08) and Matthew Ford (2003–04) are other former recipients of the accolade.