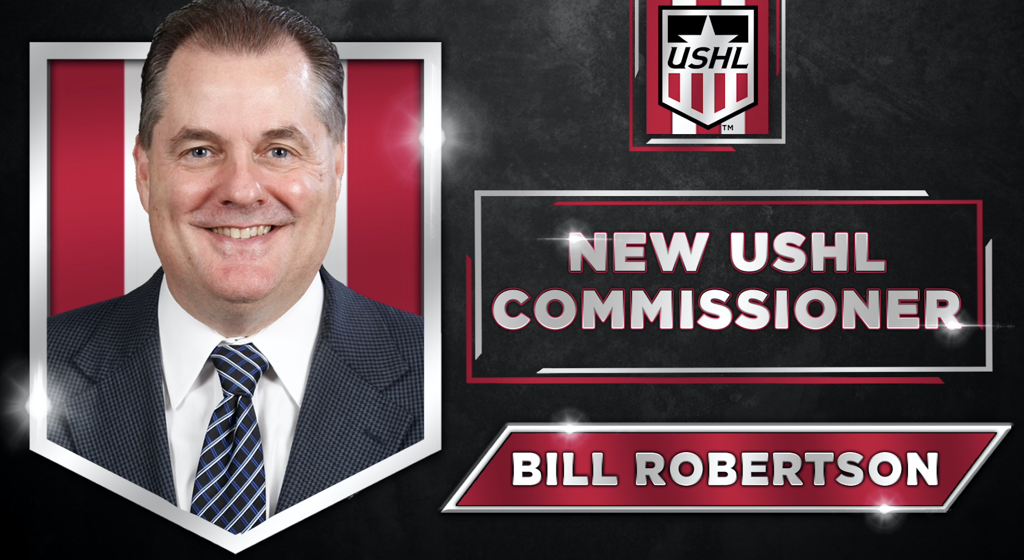 Robertson was approved Thursday afternoon by the USHL Board of Governors to take over the role from Tom Garrity, who has served in the USHL President and Commissioner role since November 2017. Robertson will begin his role with the USHL on July 12.

“I’ve known and worked with Bill for 20 years and am confident in saying the USHL is in great hands with Bill taking over the roles of President and Commissioner,” said Garrity. “We had a lot of fantastic candidates for the position but feel Bill’s experience in the sport will help continue to grow the league’s pedigree as one of the best junior hockey leagues in the world. I have great respect for Bill as a person and leader and there is no one better to lead the USHL.”

With the WCHA, Robertson has improved the experience for both the student-athlete and fans. The St. Paul, Minn. native brought playoff games back to campuses, championed safety provisions and introduced the 3-on-3 overtime and shootout format to the WCHA regular season for the first time in league history. Robertson played a pivotal role in expanding partnerships, adding collaborations and refining Association governance all while reducing operating expenses.

“I’m honored to serve as the President and Commissioner of the USHL,” said Robertson. “As the only Tier I junior hockey league in the United States, the USHL stands as the top development league for the sport of hockey in this country. I’m excited to work with our owners, team executives, general managers, coaches and the individual markets that support this great league as we continue to raise our profile and grow the USHL. I’m also grateful to succeed my good friend Tom Garrity, who has seen the league thrive under his leadership.”

Prior to his experience in the WCHA, Robertson was part of the inception of the Mighty Ducks of Anaheim (NHL), Minnesota Wild (NHL), Minnesota Timberwolves (NBA) and Minnesota Swarm (MLL) as well as four different sporting venues including the Xcel Energy Center, Target Center, Arrowhead Pond of Anaheim and Edison International Field.

From 1998-2011, Robertson served as the Vice President of Communications and Broadcasting for the Minnesota Wild and Minnesota Sports & Entertainment. Robertson helped establish the franchise and events it hosted while leading the media relations, community relations, publications and broadcasting departments. While with the Wild, Robertson and his staff won the Dick Dillman Award, which is given to the NHL’s top public relations staff, for their efforts during the 2005-06 season. In 2003, The Hockey News named the Minnesota Wild as the NHL’s best media relations department. In 2000, Robertson was named one of the “100 People to Watch” in Minnesota (Minneapolis/Saint Paul Magazine) and named to the area’s “40 Under 40” (Twin Cities Business Journal).

Prior to working with the Wild, Robertson served as the Director of Communications for The Walt Disney Company (1993-98), leading communications efforts for the Mighty Ducks of Anaheim (NHL) and Anaheim Angels (MLB). Robertson also served in the same role with the Minnesota Timberwolves (1989-93). While with the Ducks, Robertson’s staff won the Dick Dillman Award in four-straight seasons (1994-97).

Robertson’s experience in hockey also includes strategic planning and serving as the main liaison for the 2004 NHL All-Star Weekend, 2004 World Cup of Hockey, and 2011 NHL Draft as well as serving as media relations liaison for the men’s and women’s Team USA Olympic ice hockey teams in 2002 and 2006.

A native of St. Paul, Minn., Robertson is the father of Brett and Brooke and the son of late Norbert Robertson who played hockey collegiately at University of Minnesota and University of St. Thomas. Mike, Robertson’s older brother, played college hockey for Boston College.