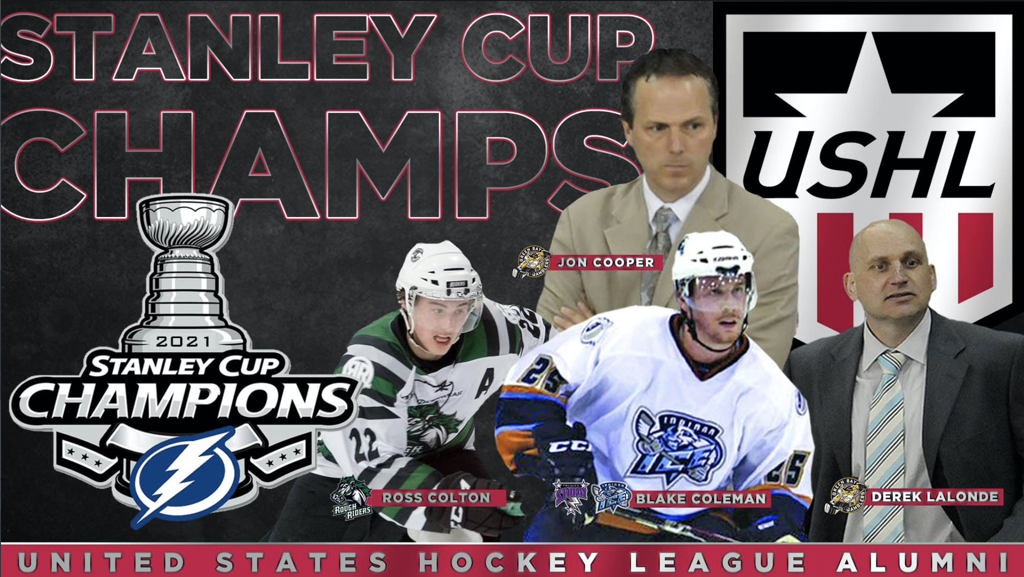 Five USHL alumni won the Stanley Cup Wednesday night as the Tampa Bay Lightning repeated as Stanley Cup Champions with a 1-0 win over the Montreal Canadiens, becoming the first back-to-back Champions since the Pittsburgh Penguins (2016 & 2017).

Tampa Bay forward Cal Foote (Omaha Lancers, 2014-15) made his NHL debut this season and finished the regular season with three points (1-2-3) in 35 games and did not appear in the Playoffs.

With Coleman and Colton lifting the Stanley Cup, the USHL has had at least one alumnus win the Stanley Cup for 18-straight seasons, including multiple alumni in 16 of those seasons.

Behind the bench, Lightning Head Coach Jon Cooper and Assistant Coach Derek LaLonde each were crowned Stanley Cup Champions for a second time. Cooper is now one of only 18 NHL head coaches all time to win multiple Stanley Cups and one of only 12 NHL Head Coaches to win the Stanley Cup in back-to-back seasons. The former Green Bay Gamblers General Manager and Head Coach (2008-10) has the second-best Playoffs winning percentage among those multiple-Cup winning coaches (.647), trailing only Hockey Hall of Fame member Scotty Bowman (.657). Cooper’s winning percentage is fifth among all NHL Head Coaches with at least 100 Playoff games coached (634 games, 384-197-53). LaLonde, who took over as Gamblers General Manager and Head Coach (2011-14) after Cooper, has served as a Lightning Assistant Coach for three seasons now. Cooper (2010) and LaLonde (2012) each led the Gamblers to Clark Cup Championships.