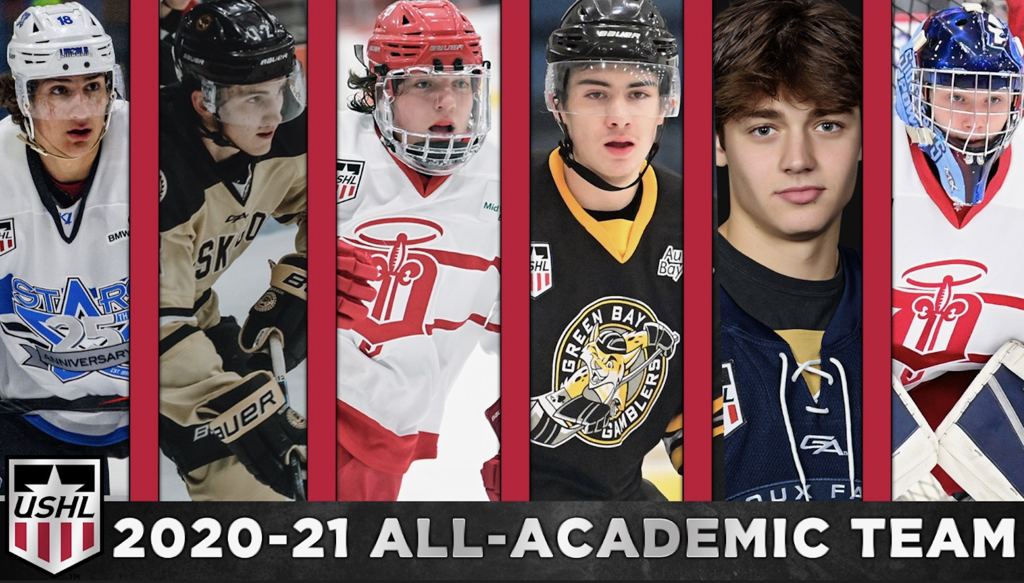 GREEN BAY, WI. - Defenseman Damien Carfagna has been named to the 2021 USHL All-Academic team for his excellence in the classroom. The University of New Hampshire commit achieved a 3.91 GPA.

Carfagna was selected by the Gamblers in the 2020 USHL Entry Draft.  The Wood Ridge, New Jersey native appeared in 50 games during his rookie campaign, tallying 18 points (6 goals and 12 assists).  Carfagna is ranked by NHL Central Scouting and projects to be drafted in the 2021 NHL Entry Draft (July 23 & 24).

“Damien is a very impressive young man,” says Gamblers Head Coach/General Manager Pat Mikesch. “He has a strong work ethic in all facets of his life, which has paid dividends both on and off the ice.”

DUBUQUE, Iowa — Dubuque Fighting Saints forward Connor Kurth and goaltender Hobie Hedquist were named to the USHL All-Academic Team for his excellence in the classroom. The organization continues its run as a consistent contributor to the USHL’s best student-athletes.

The last several years have included nods to Stephen Halliday, Riley Stuart, Ty Jackson, Mason McCormick, Jacob Semik, Aidan Fulp, and Alex Steeves on the USHL All-Academic Team. Steeves was also named USHL Scholar-Athlete as the best student in the USHL in 2018. All of these incredible academic achievements have been under the watch of academic coordinator JoAnne Gibson, who has served in the role and has guided all Dubuque Fighting Saints players in their academic endeavors.

Kurth completed 11 credits at St. Paul Community College and 11 credits at Normandale Community College, ultimately finishing his high school career with a 4.12 GPA. He is committed to the University of Minnesota, a regular powerhouse in the Big Ten. The academic accolade stacks on top of his earlier selection to the USHL All-Rookie Second Team this summer.

Hedquist, who is committed to the University of North Dakota, completed his high schooling career online through a school in Minnesota, and finished with a 3.70 GPA.

“Academics are a significant part of the USHL and we are proud that Connor and Hobie continued the Fighting Saints’ tradition of excellence in the classroom,” said Kalle Larsson, General Manager of the Dubuque Fighting Saints. “We congratulate both of them on these well-deserved honors.”

"I’m honored to be named a USHL scholar-athlete this year and represent the Stars," Laba said. "Being a student-athlete is important to me and my grades have always been a priority."

On the ice, the Stars rookie scored nine goals and registered ten assists in 49 games. Off of it, the 17-year-old amassed a 4.0 GPA during the 2020-21 season, taking classes online through the University of Nebraska High School.

"With the support of the Stars organization, I was able to balance school and hockey this past year, making the transition to junior hockey smooth," Laba continued. "I look forward to furthering my education when I arrive at Colgate University following my USHL career."

Laba will be back in Lincoln next week for Main Camp at John Breslow Ice Hockey Center starting on July 26th. Admission is free and Stars merchandise will be available for purchase.

Sioux Falls, SD — The Sioux Falls Stampede are proud to announce that forward Ean Somoza is one of five players named to the USHL All-Academic Team for the 2020-21 season.

Somoza completed his senior year locally at Roosevelt High School in Sioux Falls where he maintained a rigorous daily hockey schedule with the Stampede and accomplished a 3.67 GPA for the year. Despite the many challenges faced during the year, including COVID, practices, games and workouts, Somoza worked diligently to finish his course work early and ended his academic career with a 3.39 GPA.

“We are extremely proud of Ean,” stated Stampede General Manager and Head Coach Marty Murray. “Juggling school and hockey is never easy, but was even more difficult this past season due to all that was going on with COVID. Ean works extremely hard in the class room and off the ice and it is nice to see him rewarded for his work.”

The Thousand Oaks, CA native appeared in 44 of 48 games last season with the Stampede while posting 12 points. Somoza was a Phase I draft choice of the Stampede in 2019 and spent the 2019-20 season with the Los Angeles Jr. Kings 16U AAA squad where he tallied 78 points in 49 games.

Somoza is expected to return to the Stampede this fall for the 2021-22 season. The Herd begin camp on September 1st and will open the regular season on October 2nd in Sioux City. The Stampede’s home opener is slated for Saturday, October 9th at 7:05 PM against the Lincoln Stars. Season, suite and group tickets are now on sale by calling the Stampede office at 605-275-4625.

MUSKEGON, MI - Muskegon Lumberjacks forward Ben Strinden has been named to the USHL All-Academic team, putting him among the top six students in the league. Strinden carried an astounding 4.00 weighted GPA during the 2020-21 season.

"Ben is a hardworking young man and we are excited to see him receive recognition for his efforts," said President of Hockey Operations Steve Lowe.  “Not only does Ben's work as a two-way forward bring value to the ice but his leadership and perseverance reflect the golden standard of his character."

In Strinden's first year in the USHL, the Muskegon forward played 23 games, and tallied one goal and nine assists. When asked about his return to Muskegon for the upcoming season, Strinden said "I'm looking forward to taking on a bigger role and being a leader on a younger team."

Strinden identified science as his favorite subject in school, but plans to study finance and accounting at the University of North Dakota after his USHL career is over.