Three Defensemen, One Forward and One Goaltender Head to the Newest NHL Franchise 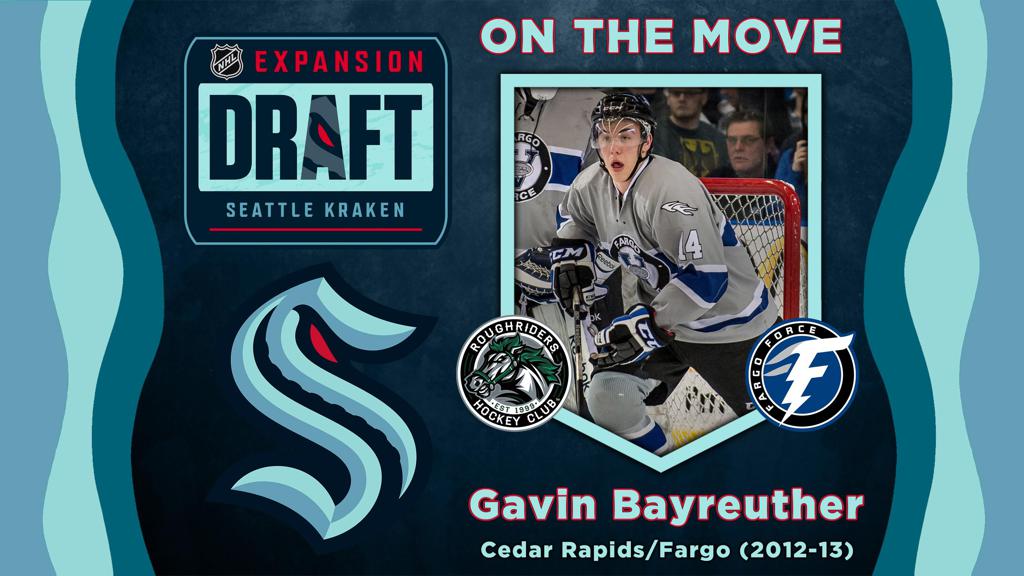 Bayreuther joins the Kraken after spending last season with the Columbus Blue Jackets. The former Cedar Rapids Roughriders and Fargo Force defenseman (2012-13) appeared in 60 USHL games and collected 33 points (9-24-33) before playing in 13 Clark Cup Playoffs games with the Force. Bayreuther’s USHL performance earned him a spot on the All-Rookie team. After the USHL, Bayreuther played four seasons at St. Lawrence University, went undrafted and made his NHL debut with the Dallas Stars during the 2018-19 season. Bayreuther has six points (3-3-6) in 28 career NHL games. 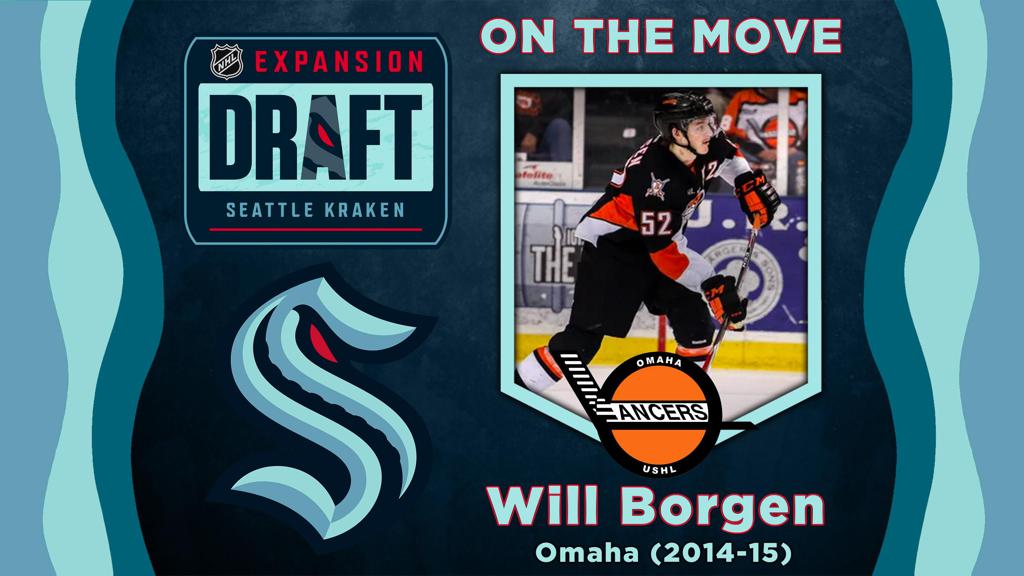 Borgen was selected by the Kraken after appearing in 14 games with the Buffalo Sabres after the Sabres selected him 92nd overall in Round 4 of the 2015 NHL Draft. The former Omaha Lancers defenseman picked up six points (1-5-6) in 18 career USHL games. Borgen then went on to skate for St. Cloud State University for the next three seasons before joining the Sabres’ system. 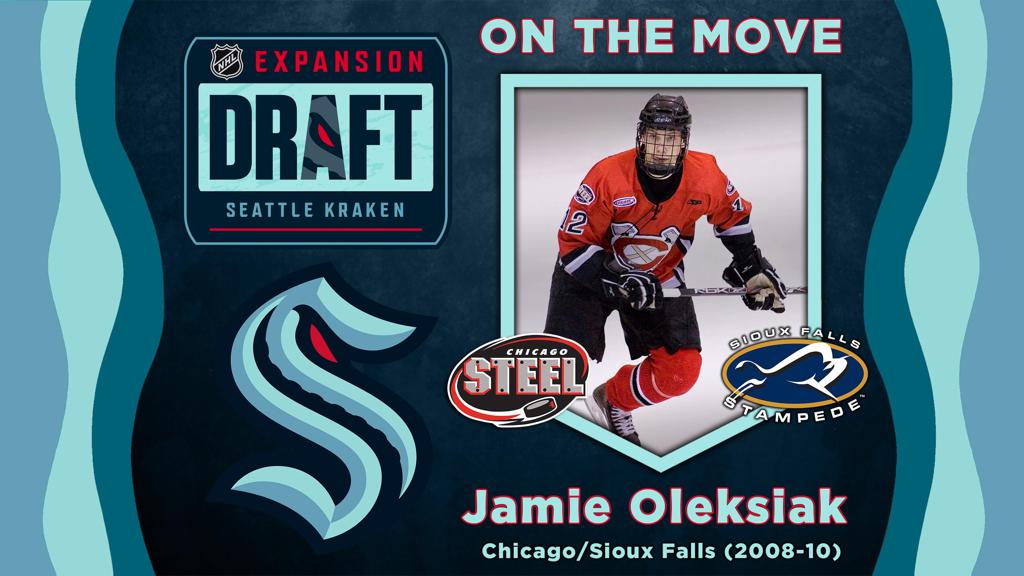 Oleksiak, also known as Big Rig, is headed to the Emerald City after playing the last three seasons with the Dallas Stars. The NHL veteran has appeared in 369 games, collecting 72 points (24-48-72) over 10 seasons with the Stars and Pittsburgh Penguins. In the USHL, Oleksiak appeared in parts of two seasons with the Chicago Steel before finishing his career with the Sioux Falls Stampede, appearing in a total of 82 games with 18 points (2-16-18) before playing one season at Northeastern University. Oleksiak was originally drafted by the Dallas Stars in the First Round of the 2011 NHL Draft (14th Overall). 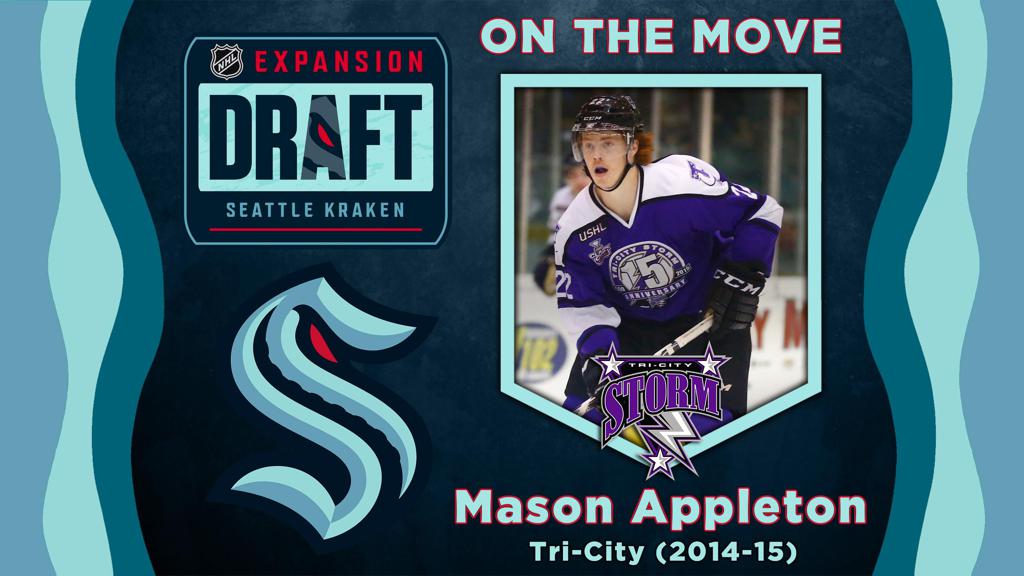 The lone forward of the USHL alumni group selected by the Kraken joined the team after spending the last three seasons with the Winnipeg Jets who originally drafted him in 2015 (Round 6, #168 Overall). Appleton collected 40 points (12-28-40) in 54 USHL games with the Storm during the 2014-15 season before playing the next two seasons at Michigan State University. Just three seasons after playing with the Storm, Appleton was named the Red Garrett Memorial Award winner, awarded to the AHL’s Rookie of the Year after picking up 66 points (22-44-66) in 76 games with the Manitoba Moose. The Green Bay, Wis. native appeared in 56 games with the Jets last season, earning 25 (12-13-25) of his 43 (20-23-43) NHL points in a four-year NHL career (138 games). 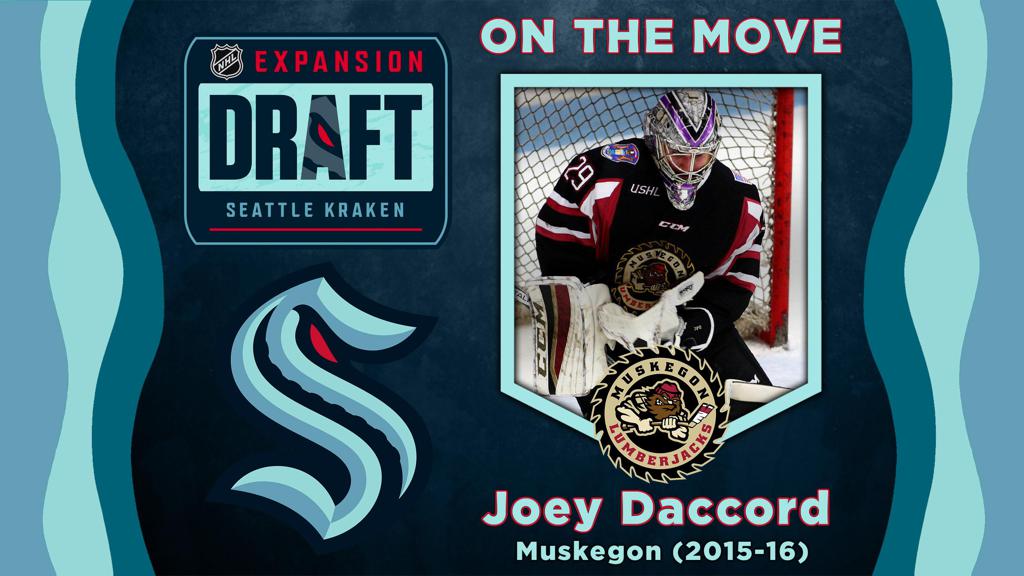 Daccord, one of three goalies selected by the Seattle Kraken, appeared in 48 USHL games during the 2015-16 season for the Muskegon Lumberjacks, finishing with a 3.10 goals against average and 0.904 save percentage with a pair of shutouts. The North Andover, Mass. native followed up his USHL season with a trio of seasons at Arizona State University before making his NHL debut during the 2018-19 season with the Ottawa Senators. In two NHL seasons, Daccord has appeared in nine games with the Senators and has a 3.50 goals against average and 0.894 save percentage.

The five selections by the Kraken is the most USHL alumni selected by a single expansion team after the Vegas Golden Knights selected two former USHL players during the 2017 Expansion Draft.

The Kraken will pick second in the 2021 NHL Draft, scheduled to begin at 7 p.m. CT on Friday night. The USHL is primed to have its fourth-straight NHL Draft with more than 50 alumni selected, including NHL Central Scouting projected First Round picks Owen Power (1), Luke Hughes (4), Matthew Beniers (6), Matthew Coronato (9), Cole Sillinger (10) and more.

Be sure to follow the USHL on Twitter (@ushl) and check USHL.com for the latest news throughout the 2021 NHL Draft on Friday night as well as Rounds 2-7 on Saturday beginning at 10 a.m. CT.