Chicago, IL - The United States Hockey League (USHL) had nine players selected in the First Round of the 2021 NHL Draft Friday night.

The league’s nine picks is tied for the second-most selections (2019) in the First Round of an NHL Draft, trailing only the league's record of 10 in 2016. 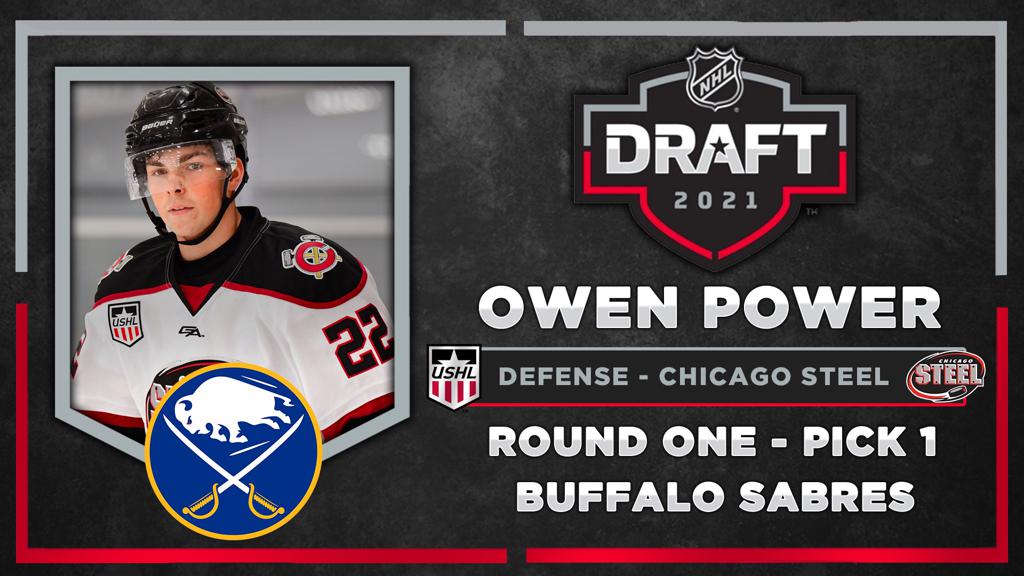 Last season was Power’s first at University of Michigan where the freshman blue liner tallied 16 points (3-13-16), earning a spot on the Big Ten All-Rookie Team as well as the All-Big Ten Second Team. Internationally, Power was part of Team Canada’s Gold Medal winning team at the 2020 World Championships. 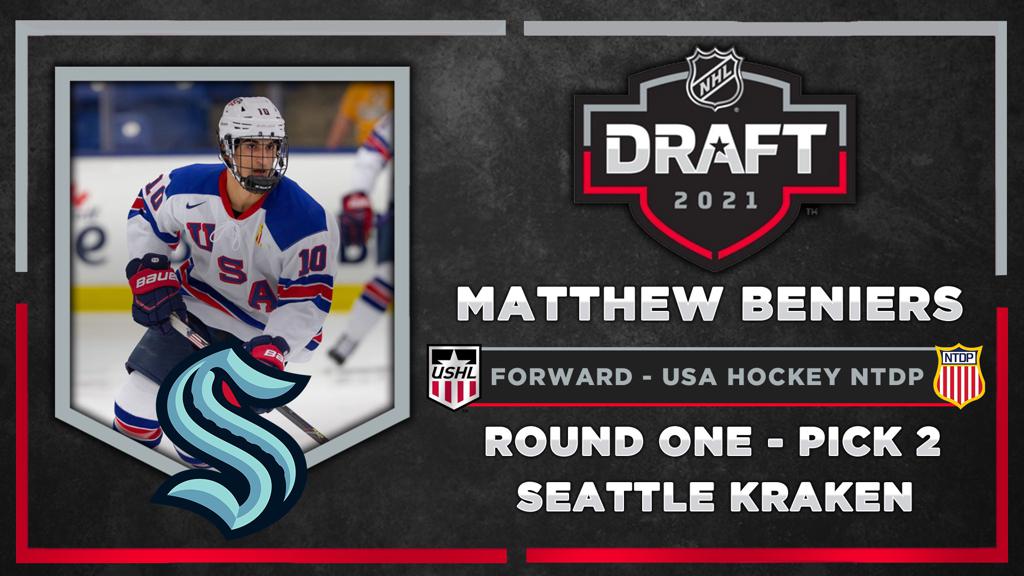 Beniers became the second USHL player to be an expansion team’s first ever NHL Draft pick as the former NTDP forward was taken second overall by the NHL’s 32nd franchise, the Seattle Kraken.

Beniers played two seasons with the NTDP in the USHL, picking up 47 points (18-29-47) in 49 league games. The Hingham, Mass. native then moved on to the University of Michigan where Beniers just finished his freshman season, scoring 24 points (10-14-24) in 24 games and earning a spot on the Big Ten All-Rookie roster as well as being named an Honorable Mention for the All-Big Ten Team. 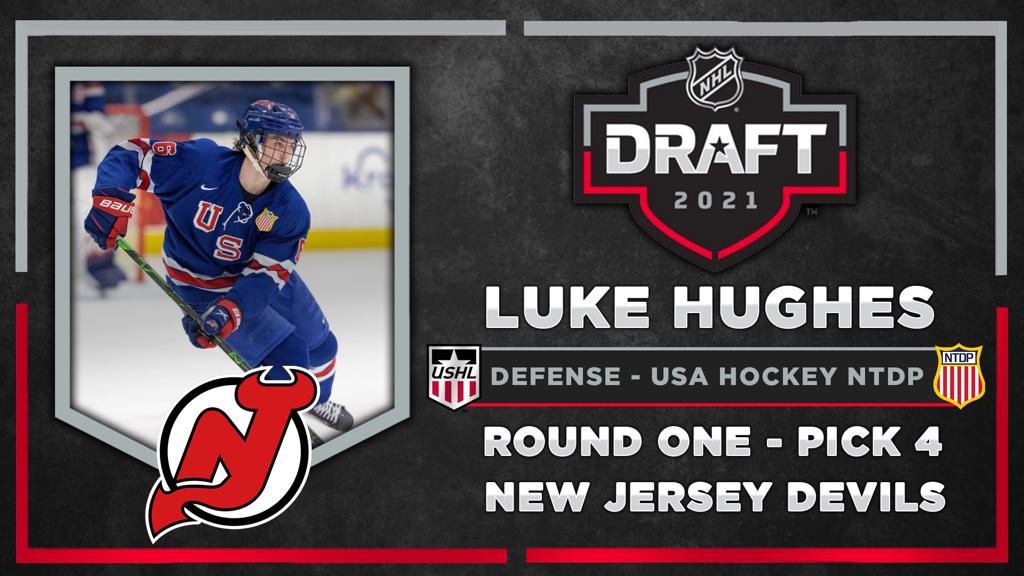 The fourth pick in the NHL Draft, NTDP alumnus Luke Hughes, made league history as the Hughes brothers are the first trio of brothers to ever be selected in the top 10 picks of the NHL Draft. Luke joins his brother, and fellow USA Hockey NTDP alumnus, Jack Hughes with the Devils and is the second defenseman of the trio to be drafted after Quinn Hughes was selected by the Vancouver Canucks.

The youngest Hughes was part of the Team USA squad that won the Under-17 World Hockey Championship Silver Medal during the 2019-20 season. 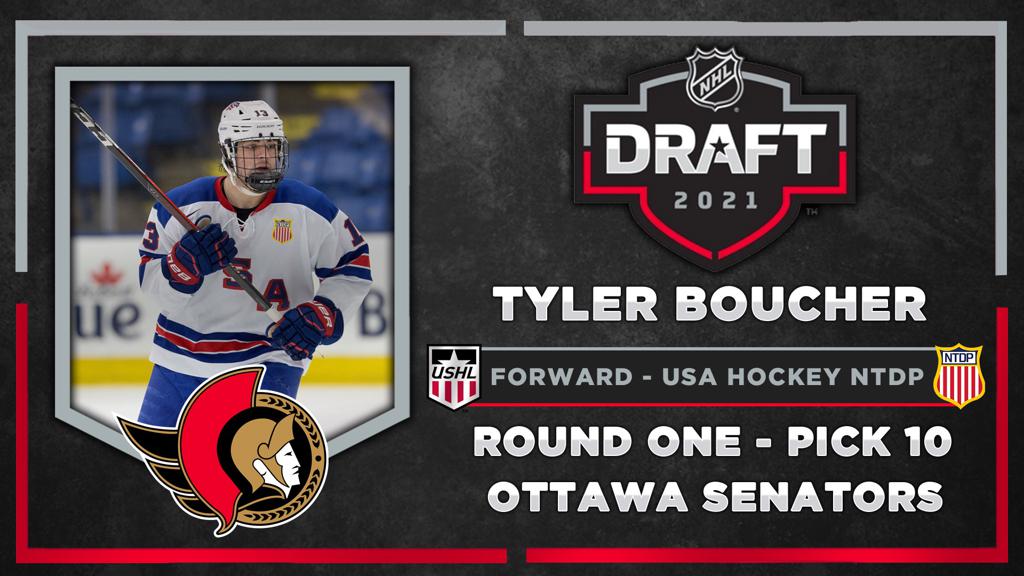 Boucher, a Boston University commit, was the fourth USHL pick in the first 10 picks of the 2021 NHL Draft, marking the first time in league history the USHL has had four of the NHL's top-10 picks in a single NHL Draft. The former NTDP forward finished his USHL career with 16 points (7-9-16) in 29 games and was on the Silver Medal winning team with Hughes and Team USA. 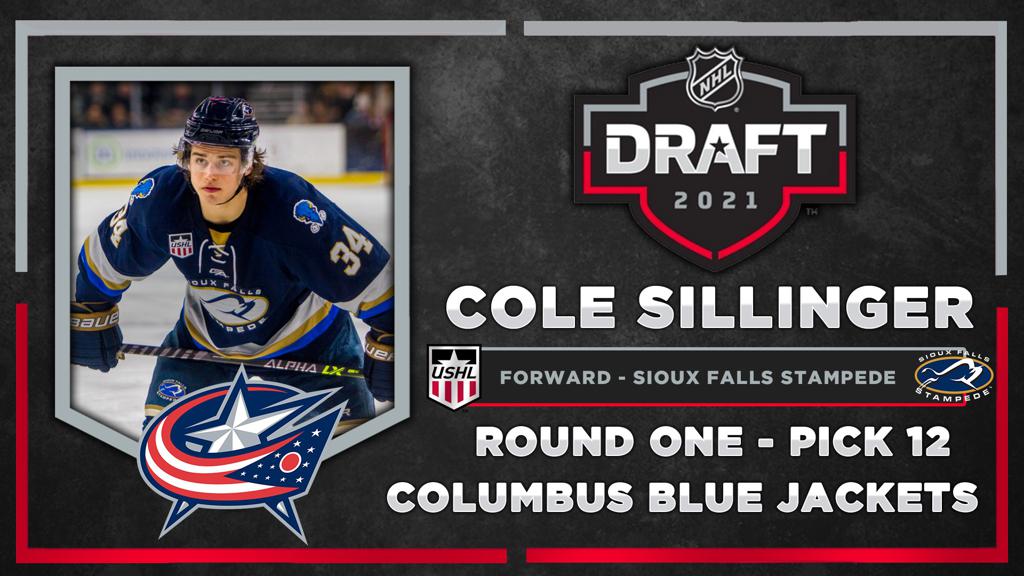 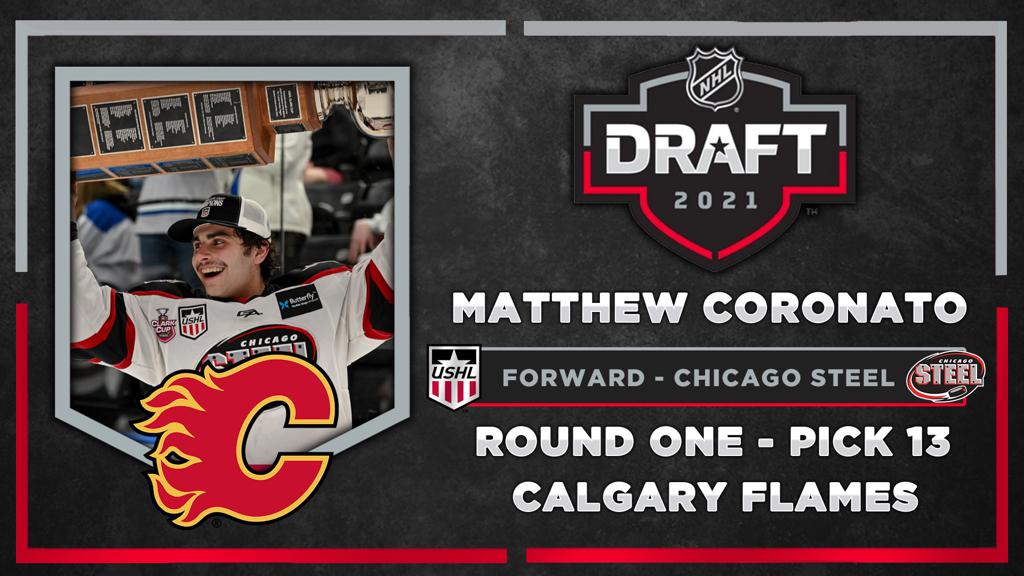 Coronato is committed to Harvard University and was a member of the All-USHL First Team last season and is the highest-drafted USHL Forward of the Year and the fifth all-time to be taken in the First Round of the NHL Draft. 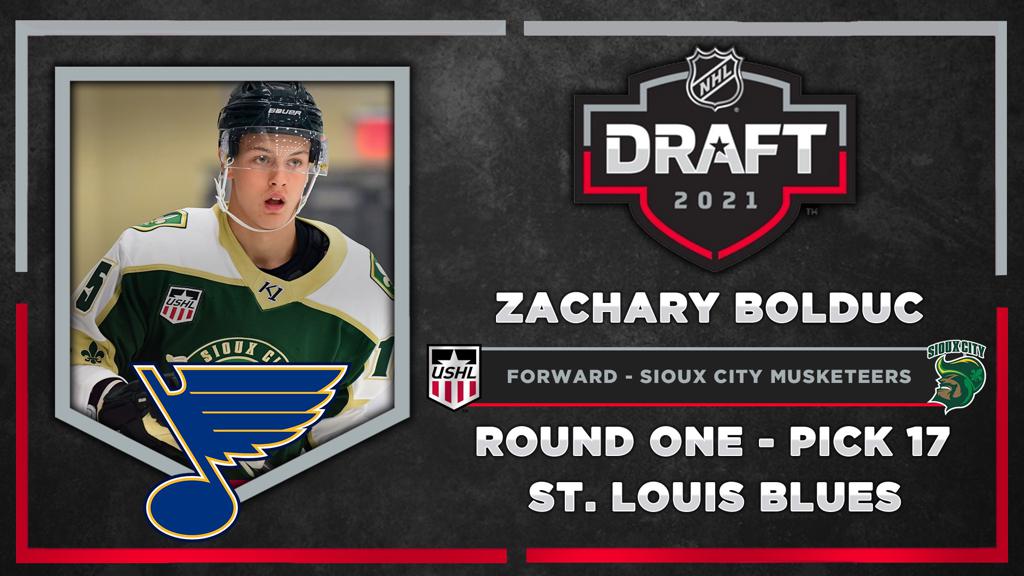 Bolduc was the Blues’ First Round selection after appearing in a pair of games for the Sioux City Musketeers during the 2019-20 season. The forward spent the last two seasons in the QMJHL. 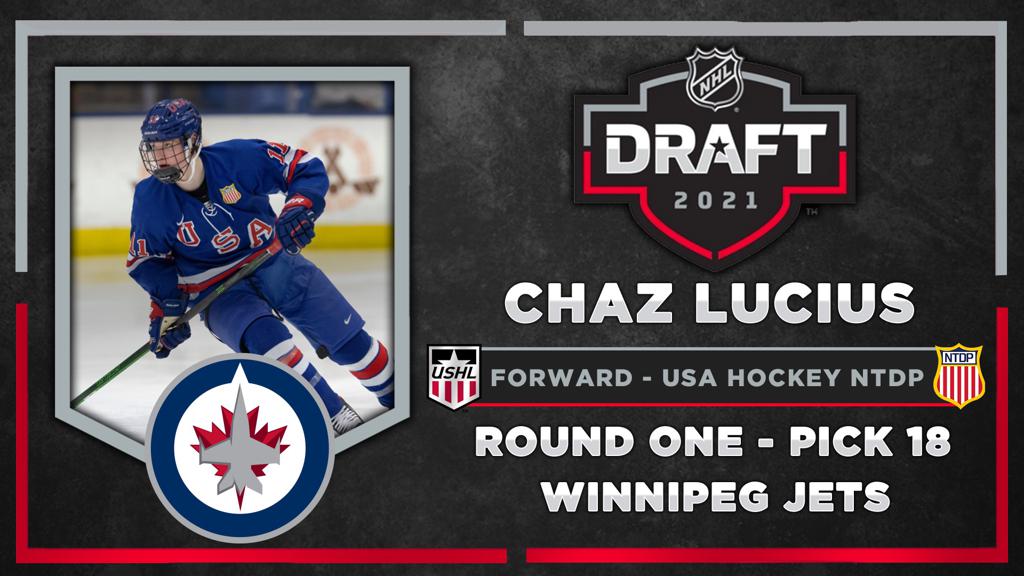 After spending the last two seasons with the NTDP, Lucius was selected 18th overall by the Winnipeg Jets after picking up 40 points (21-19-40) in 44 league games. The Grant, Min. native picked up 18 points (13-5-18) in 12 USHL games last season, potting more than a goal per game. The forward was electric during the 2019-20 World Hockey Championships, leading the tournament in both goals (7) and assists (10) as Team USA took home the Silver Medal. 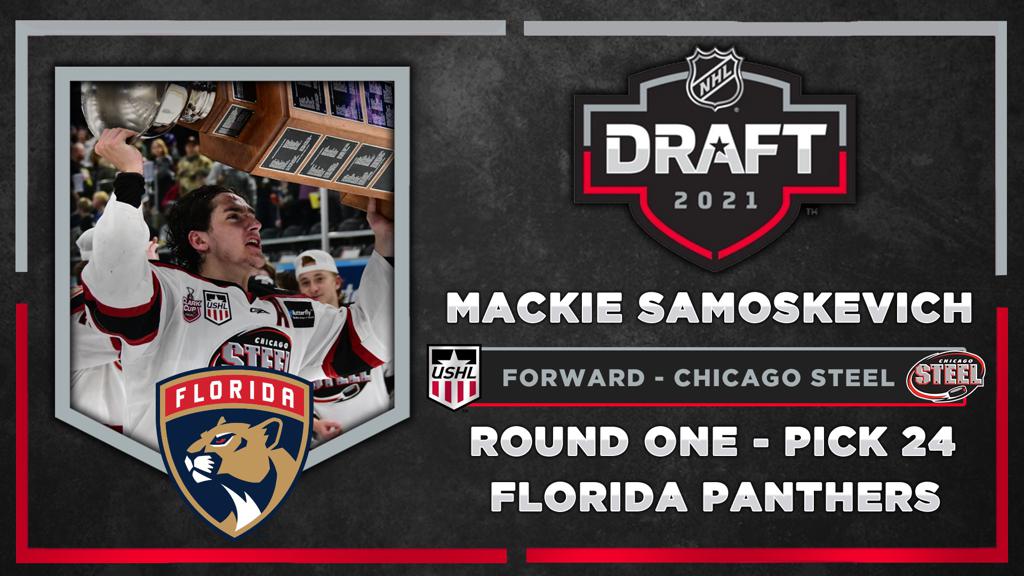 Samoskevich became the second 2021 Clark Cup Champion selected in the First Round, joining Coronato. The University of Michigan commit was an Alternate Captain for the Chicago Steel last season, his third with the team, and had 37 points (13-24-37) in 36 games. The Newtown, Conn. native picked up 73 points (26-47-73) in 85 career games.