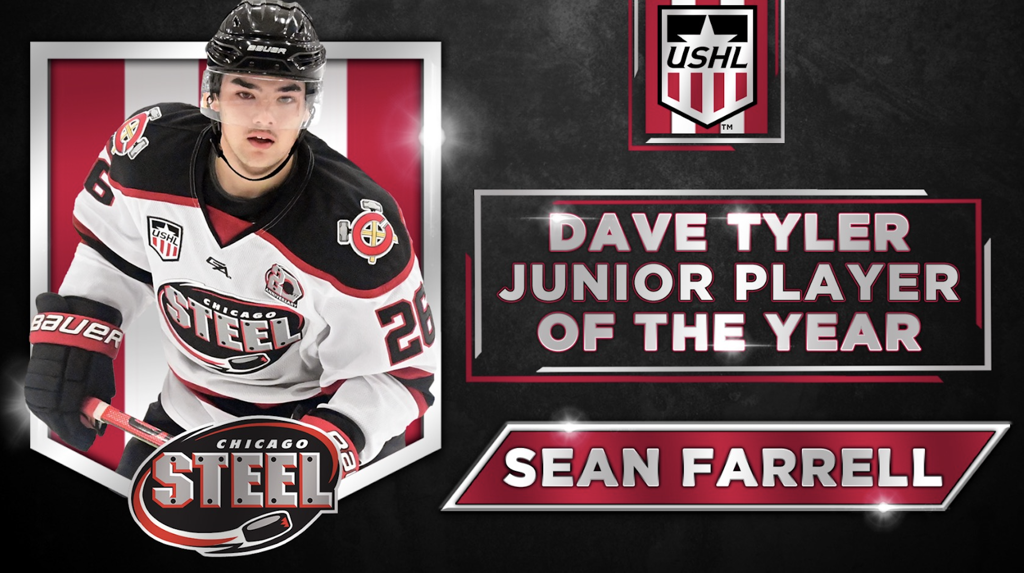 Chicago, IL - USA Hockey and the United States Hockey League (USHL) announced Monday the Dave Tyler Junior Player of the Year Award for the 2020-21 season was awarded to Sean Farrell of the Chicago Steel.

Farrell is coming off the second-best scoring season in USHL history after collecting 101 points (29-72-101) in 53 games, becoming one of only two players to ever eclipse the triple-digit mark in a single season. The Montreal Canadiens prospect (2020, Round 4, #124) is the second Chicago Steel player to earn the award, following Andrew Miller (2008-09), and the 25th total winner in 28 seasons the award has been handed out.

The Dave Tyler Player of the Year Award is named after Dave Tyler, who was part of the USA Hockey Board of Directors for more than 30 years and helped in the development and growth of junior hockey in the United States. According to USA Hockey, the Award is given annually to the best player from a United States-based junior hockey team and is selected by a panel of junior coaches and administrators.

Farrell and the Chicago Steel won the Clark Cup last season after winning its second Anderson Cup as the league’s best regular season team. The Harvard University commit finished tied for third in Playoff scoring with 10 points (2-8-10) in eight games while helping the Steel to its second Clark Cup Championship.

In his four seasons, Farrell was named Forward of the Week three times and represented the United States at the 2019 World Junior A Challenge where he and the team brought home a Bronze Medal. Farrell was also selected to play in the 2020 BioSteel All-American Game.

The 2021-22 USHL season will commence on Thursday, Sept. 23 at the DICK’S Sporting Goods USHL Fall Classic where all 16 USHL Member Clubs will play a pair of games in Cranberry Township, Penn. For more information on the USHL, please visit USHL.com.