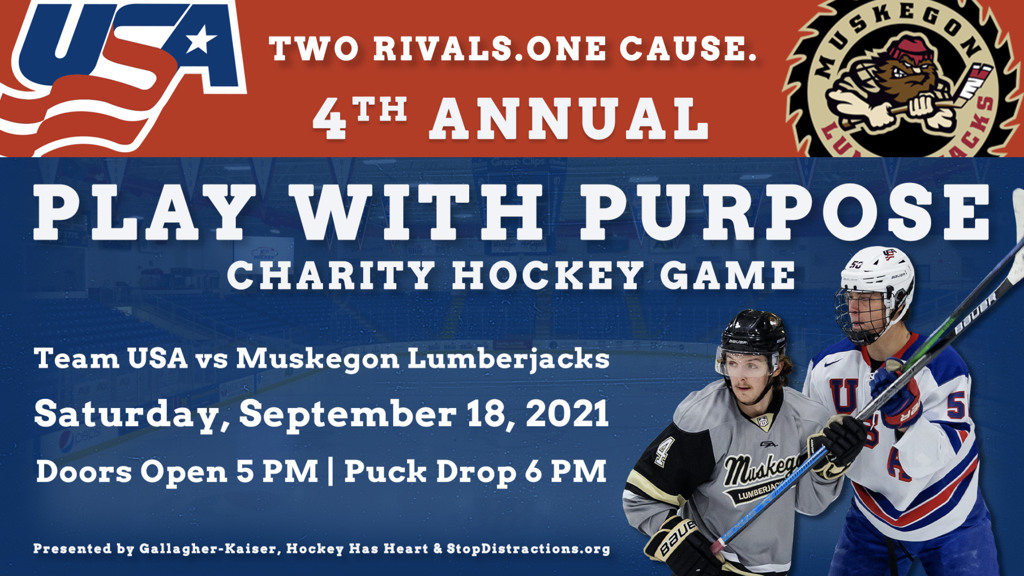 Team USA will host the Muskegon Lumberjacks for the 4th annual "Play With Purpose" hockey game on September 18 at USA Hockey Arena. Doors open at 5 pm and puck drop is slated for 6 pm.

Don't miss your opportunity to catch the exciting preseason USHL action in Plymouth - but this is more than just a hockey game. For one night, these two teams will set their rivalry aside and play for a much bigger purpose - to help end distracted driving.

The charity game will be played at the Mitchel Kiefer Memorial Rink at USA Hockey Arena to recognize, remember and honor the fifth anniversary of Mitchel's death due to a distracted driver. Together, both teams, with the support of Gallagher-Kaiser, Hockey has Heart and StopDistractions.org, will dedicate this game to help raise awareness in our local Michigan hockey community about the deadly consequences of distracted driving.

Please join us on Saturday, September 18, for our Play With Purpose game. Limited $12 general admission tickets are available now by calling the USA Hockey Arena box office at 734-453-6400 x396 during normal business hours, Monday-Friday. Tickets sold at the door will be $15.

The game will feature a pre-game ceremony with an honorary puck drop, special guest appearances from local hockey personnel and a post-game autograph session with both Team USA and Lumberjacks players.

A portion of the night's proceeds will support Hockey Has Heart, StopDistractions.org and other organizations focused on educating our local communities about the dangers of distracted driving in an effort to change driving behaviors and save lives.