Upton, Capitols Off to Historic Start

Tom Upton Has Madison Off to Best Start in Club History

The road to the best start in Madison Capitols history started long before this offseason, tracking back as far as 2006 when now General Manager and Head Coach Tom Upton was just a freshman at University of Wisconsin-Steven’s Point. From there, Upton began coaching, and his coaching tree grew, eventually leading to his third stay in the United States Hockey League (USHL), but first as a Head Coach. Even if it was delayed a season.

“I’m a glass half full guy, so I by no means wanted to sit around and feel sorry for ourselves that we couldn’t play, and I knew at the end of the day I had to be a better coach and person when the team returned, than I was when the team got shut down,” said Upton. “I couldn’t go stale as a coach because I didn’t have 62 games to coach in the league last season. I spent every day trying to educate myself.”

Upton didn’t get to coach the Capitols in his first season with the team as, shortly after his hiring, Madison announced it would be one of two USHL Member Clubs not participating in the 2020-21 season. The Capitols were facing COVID restrictions from the county in which they play, meaning Upton’s start as a USHL Head Coach would be delayed a year. In that season, the players that would have made up Upton’s first roster in Madison were dispersed throughout the league, including a pair of Clark Cup Champions as goaltender Simon Latkoczy and forward Quinn Finley raised the Clark Cup with the Chicago Steel. Meanwhile in the Western Conference, forwards Tyler Haskins and Reid Pabich each finished in the top-10 amongst Sioux Falls Stampede scorers with 27 and 22 points, respectively. 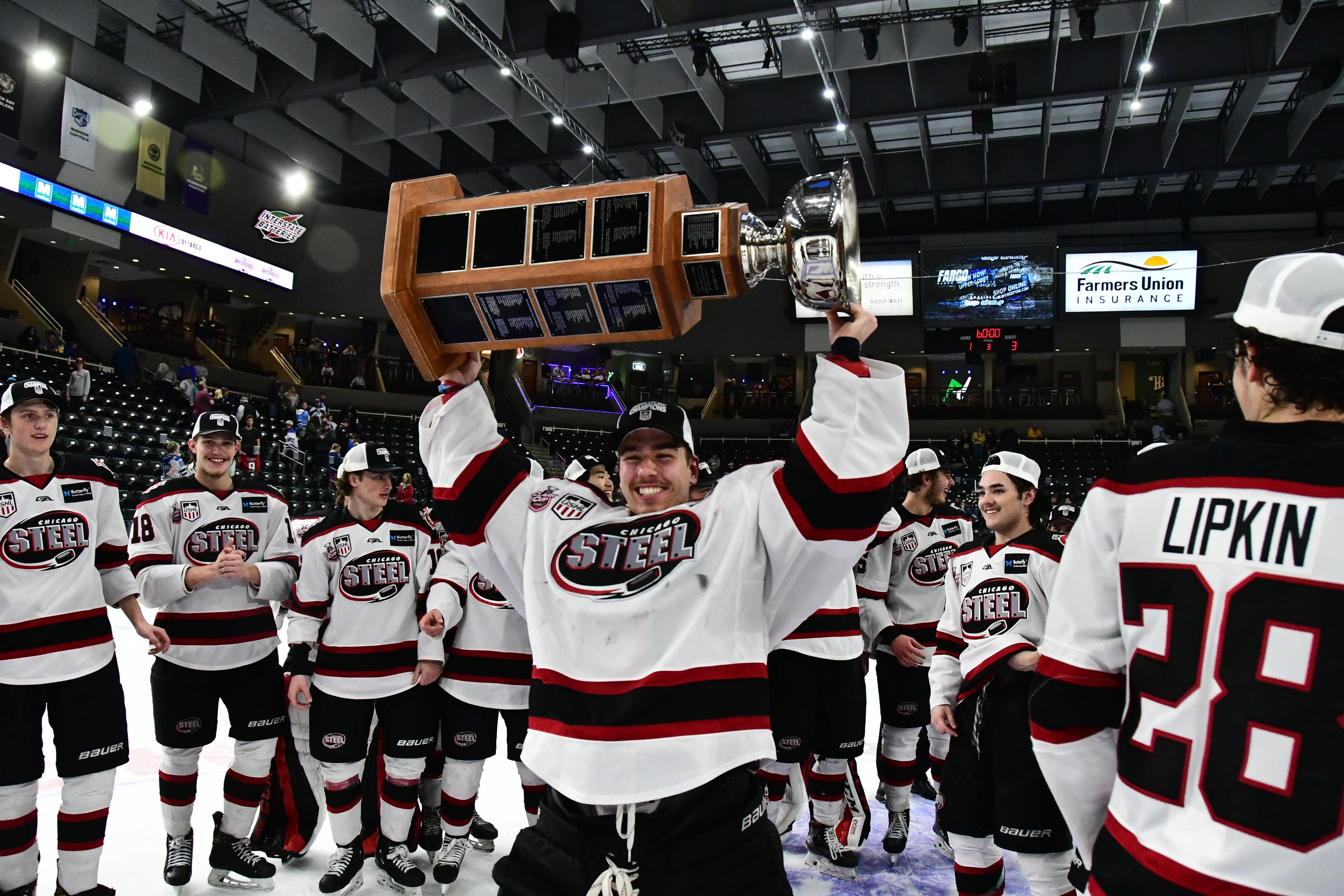 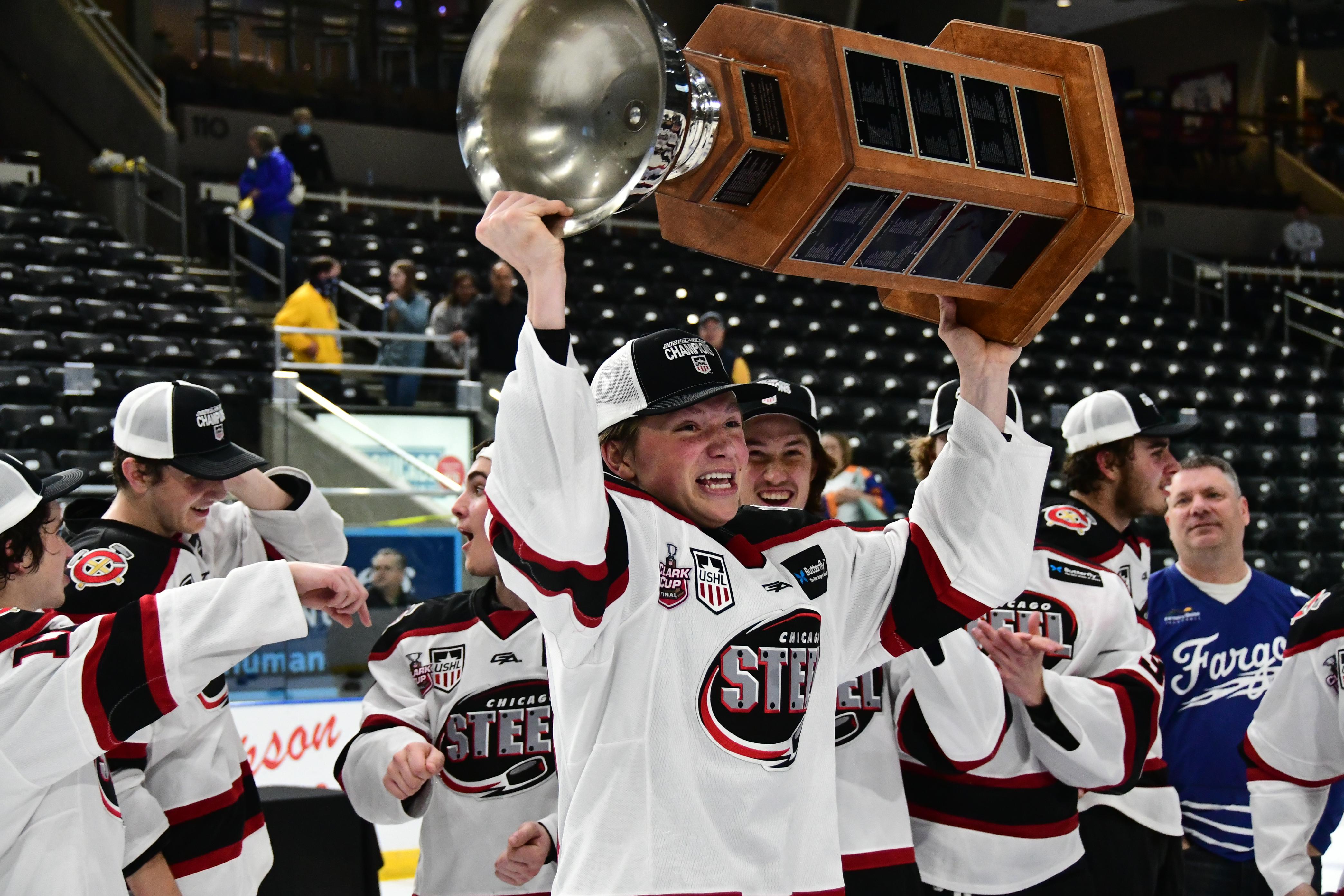 “Having our guys, who had played for other teams in the league and had success with other teams the prior season … their belief in what we’re doing here and their loyalty to return back to our team and be with us this year has been enormous,” said Upton. “When we first Drafted or recruited these young men, we were big on communication. A big part of what I wanted to do was communicate to them and their family what our expectations, identity and standards were … and [I reiterated that] once they were back on our Protected Lists at the end of the season, as well as what the plan was going to be moving forward. We carried that into the summer and training camp and now start of the season. It’s all about communication.”

This season, it’s been a collective team effort on the offensive side of the puck. Four skaters, including Haskins and Horbach are tied for the team lead with 11 points through the first nine games while another pair of skaters follows closely behind with 10 points in that span. The players with 11 points so far account for four of the top-14 spots in league scoring and are collectively tied for fifth among all scorers. On the other end of the ice, Latkoczy and Marino Ramirez have been nearly unbeatable between the pipes as Latkoczy carries a 6-0-0-0 record with a 2.49 goals against average and 0.916 save percentage, while Ramirez is 1-0-1-0 with a league-leading 0.99 GAA and second-best 0.952 SV%. 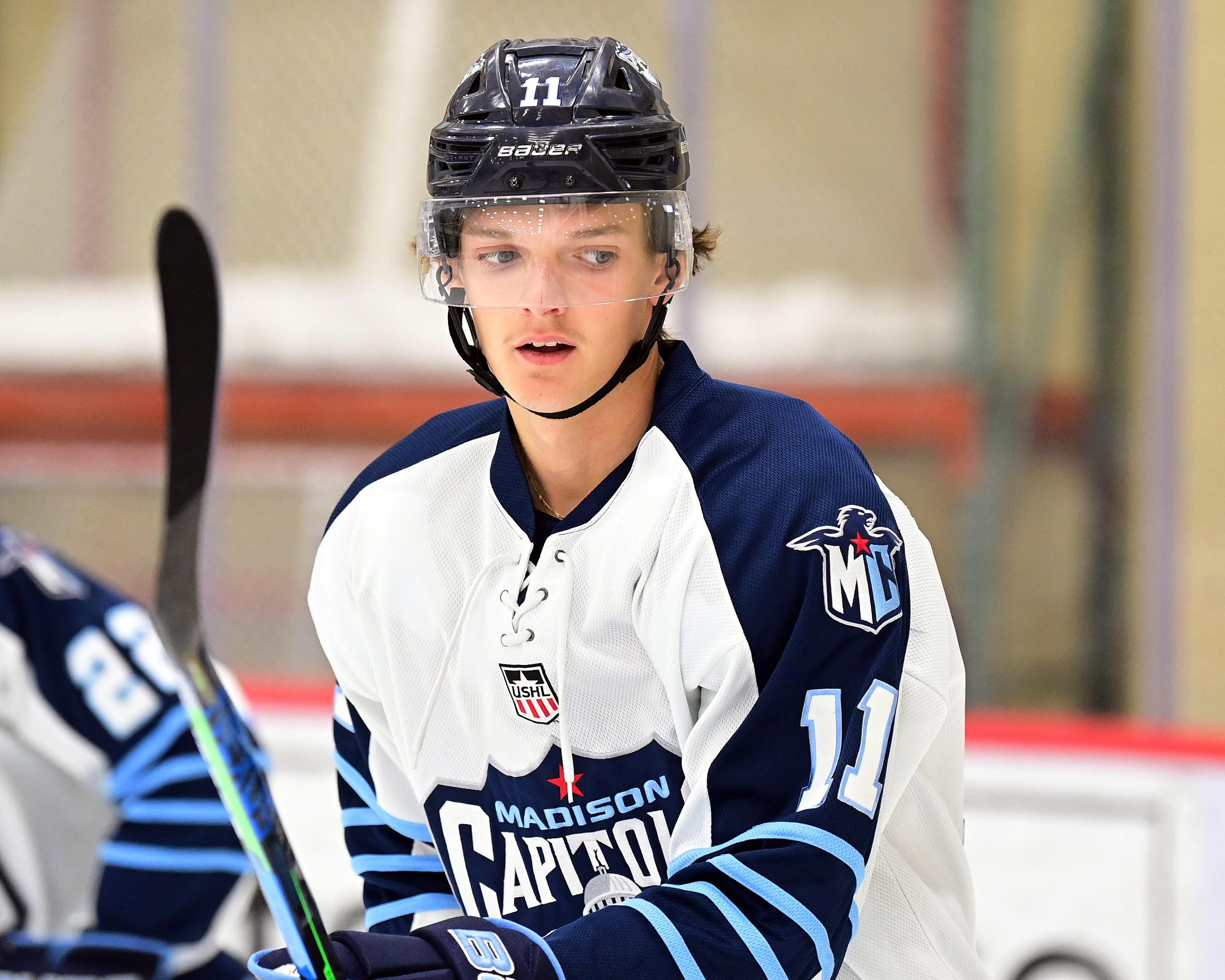 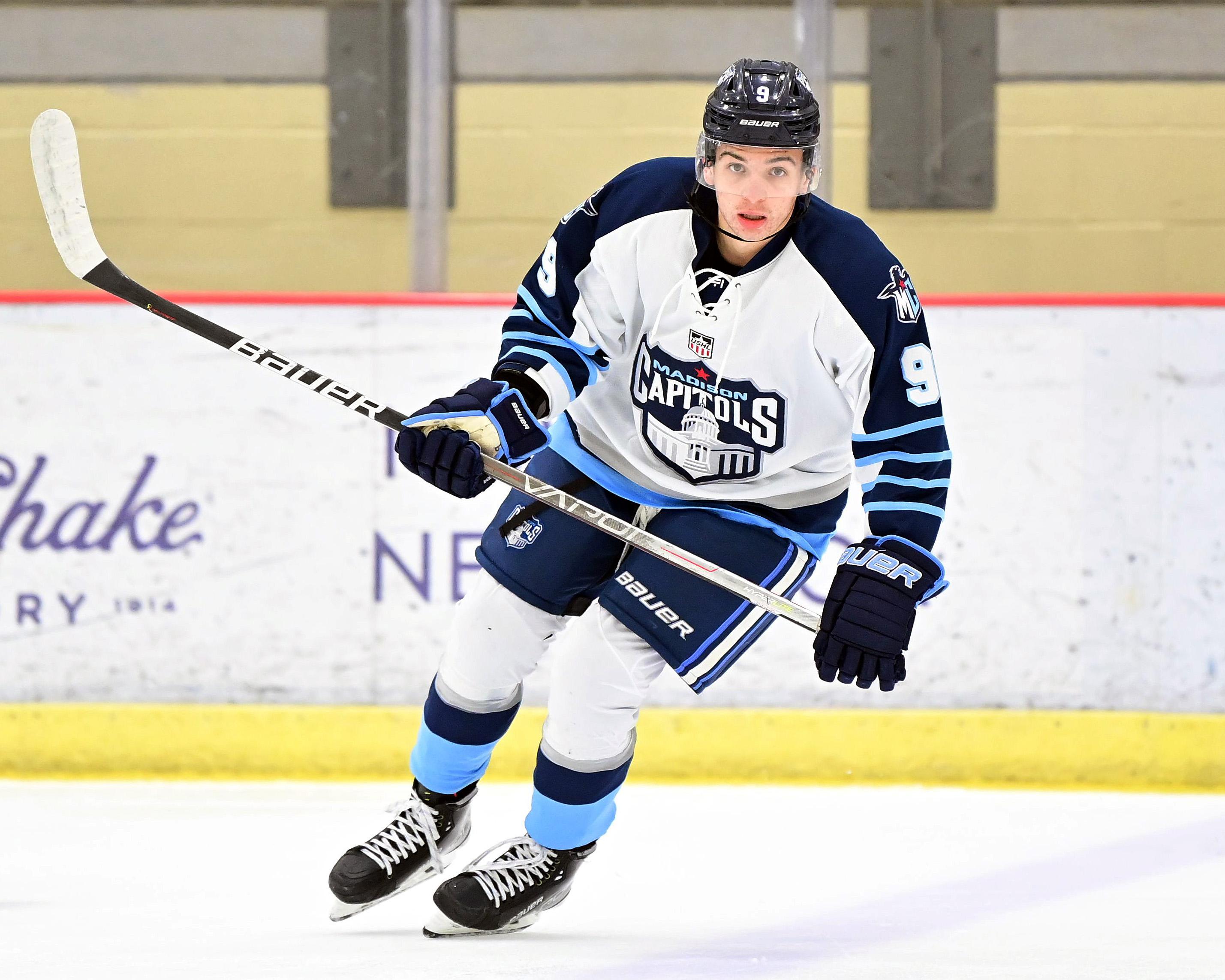 “Everyone has bought into our culture,” said Upton. “It’s something we work hard on every day, our culture, expectations and standards. It sounds cliché, but if a team is doing well, everyone is bought in. This is a culture that, it’s not one that I am creating, it’s not one that our staff is creating, it’s a culture that [players] are creating. I tell them all the time, this is your team. We’re all a part of it, but this is your team.”

How Upton Arrived in Madison

When Tom Upton arrived at Stevens Point as a freshman defenseman for the Pointers, he became close with Anthony Noreen, who at the time was a senior blueliner finishing out the final of his four seasons with the team as Upton was beginning his first. From there, a lifelong friendship was born and now both find themselves coaching in the USHL.

After his senior season at Stevens Point ended, Upton set his sights on coaching and followed in the footsteps of Noreen going directly from Pointers defenseman to Pointers Assistant Coach. Noreen moved on to the Youngstown Phantoms, where he would serve as Assistant Coach for the 2010-11 season before being promoted to General Manager and Head Coach from 2011-15. Back in Wisconsin, Upton’s career behind the bench was taking off, learning from then-Head Coach Will Nichol.

From there, Upton’s path wove through multiple leagues. There was the stop in Cedar Rapids where he served as Assistant Coach under the all-time active wins leader in USHL coaching history, Mark Carlson. There was the two years he spent as bench boss with the Minnesota Magicians, returning to the NAHL, the league he played in before heading to college. Then there was the stop back in the USHL to serve as an Assistant Coach for Brad Patterson’s Youngstown Phantoms. Upton’s journey then sent him back to college to become an Assistant Coach at Mercyhurst University before a long car ride and reference of his coaching tree brought him back to the USHL in the form of Madison’s Head Coach.

“I always told my wife if there was ever an opportunity to Head Coach in this league, it’s something I should look at,” said Upton. “This league is so great for players, front office staff, coaches and scouts and so many doors are opened from the USHL.”

When the Madison Captiols had an opening at Head Coach Upton found himself on the short list of candidates to fill the role. After preliminary phone calls, Upton was told Capitols Owner Ryan Suter and President Andrew Joudrey wanted to meet with him, and it being the days of COVID, Suter and Joudrey offered to meet via Zoom, but Upton knew his passion and energy for this role couldn’t be presented fully through a screen.

“So I got in the car and made the drive,” said Upton. “I knew in order to get this job, I needed to be in front of them, face-to-face. They needed to hear my passion and see my body language and I just didn’t think that could be relayed through a Zoom call. It worked out from there.”

The nearly 600-mile, 10-hour drive from Erie, Penn. to Madison gave Upton time to focus on the interview and think about what he wanted this role to be.

“I was impressed early on, how he carried himself, how he planned to build and manage a team,” said Joudrey. “He got in his car and drove, it was impressive. Will Nichol told us, ‘You’ll never regret hiring Tom Upton.’ It was a gut feeling that he was the right guy for the job and we’ve been really pleased with everything he’s done.”

It worked. The combination of Upton’s desire for an in-person interview and list of qualified references landed him the job. Those references? Look no further than the “Coaching Tree” Upton finds himself in. As a player and first-time Assistant Coach, Upton learned under the tutelage of Nichol, who is currently the Director of Player Development for the NHL’s Vegas Golden Knights. Earlier in Nichol’s career, he served as an Assistant Coach with the Chicago Steel under then-Head Coach Steve Richmond, who is coming up on his 20th season serving as the Director of Player Development for the Washington Capitals. Nichol, who Upton calls one of his biggest mentors and great friends, and Richmond also worked together in the early days of Richmond’s stay with the Capitals. 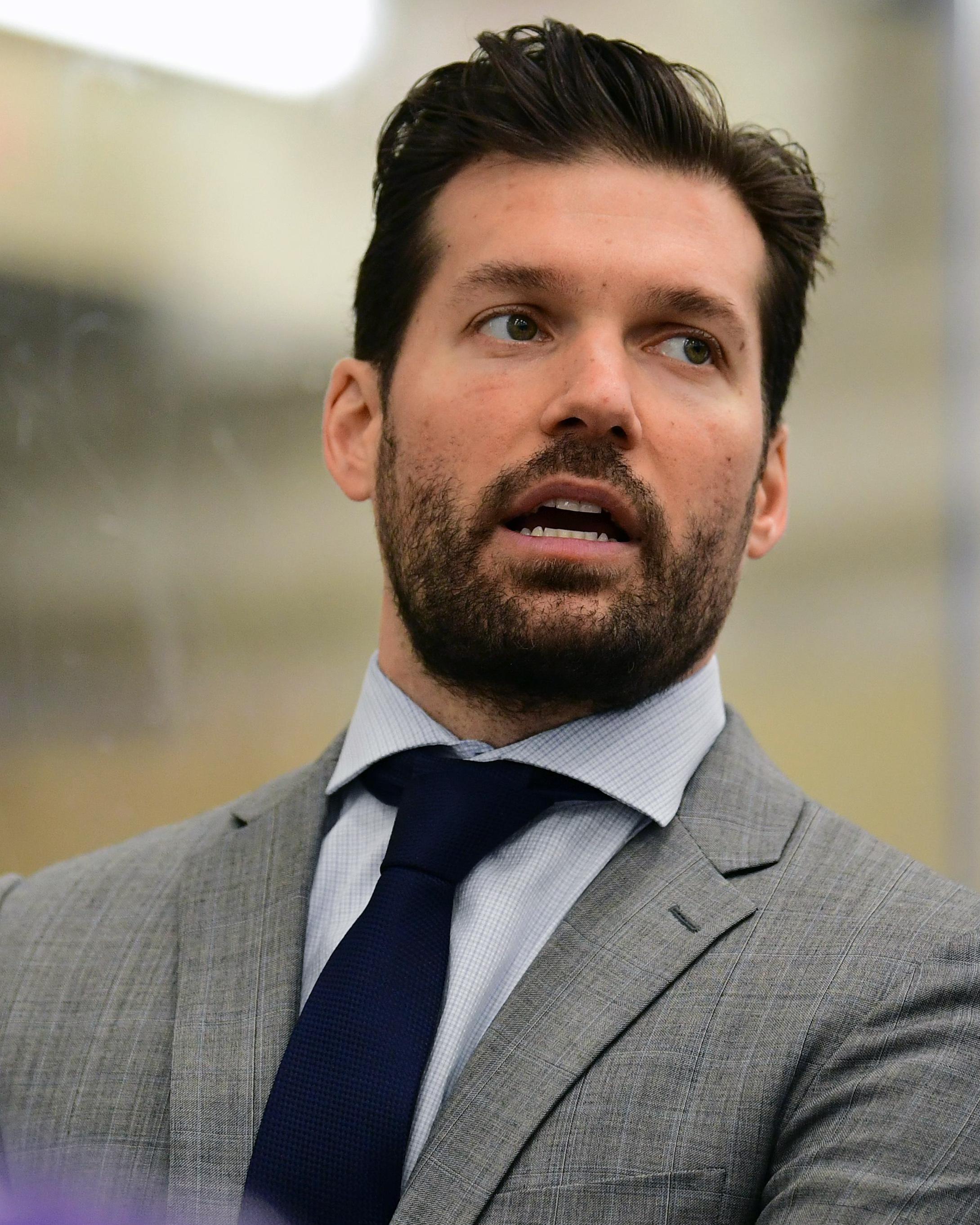 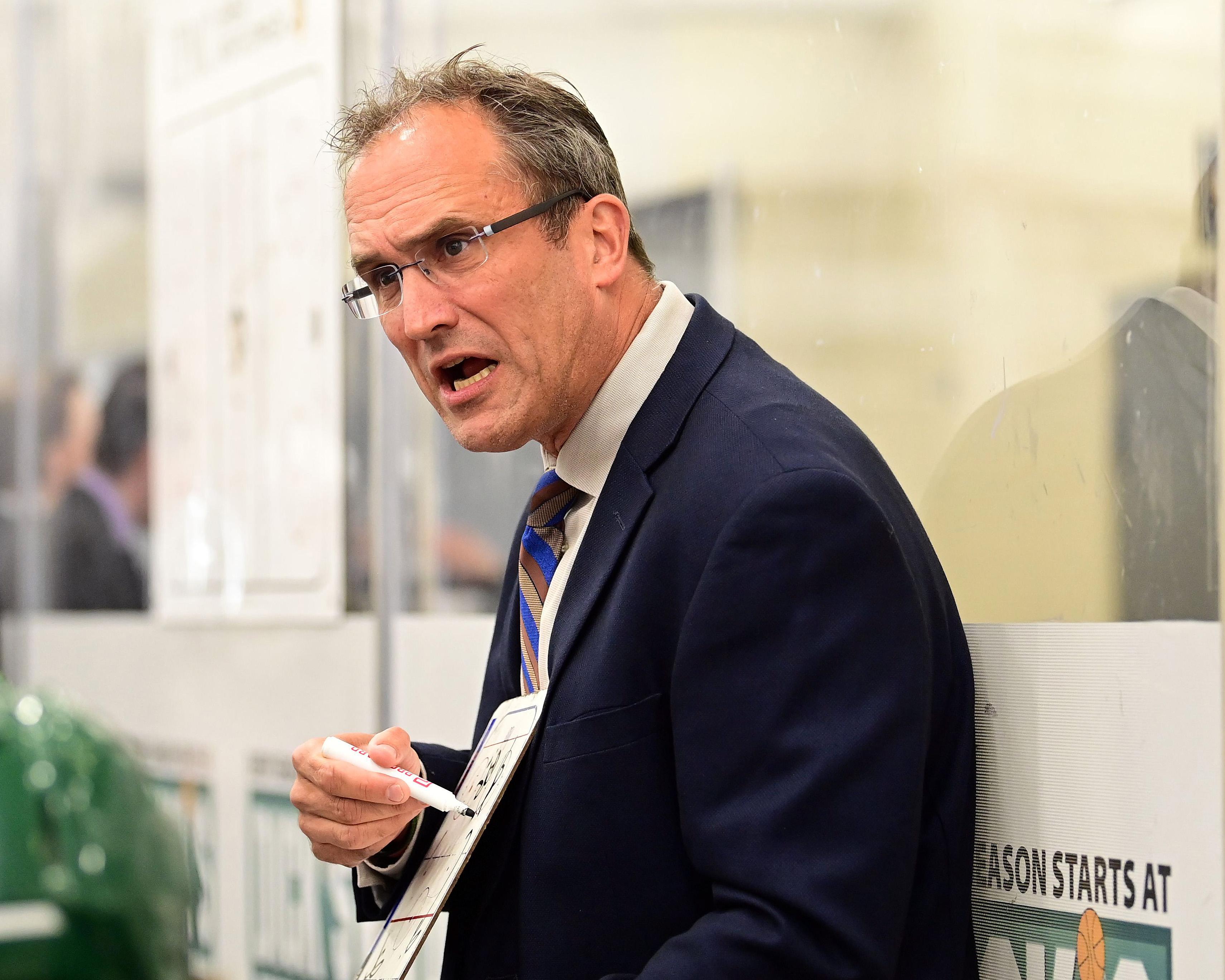 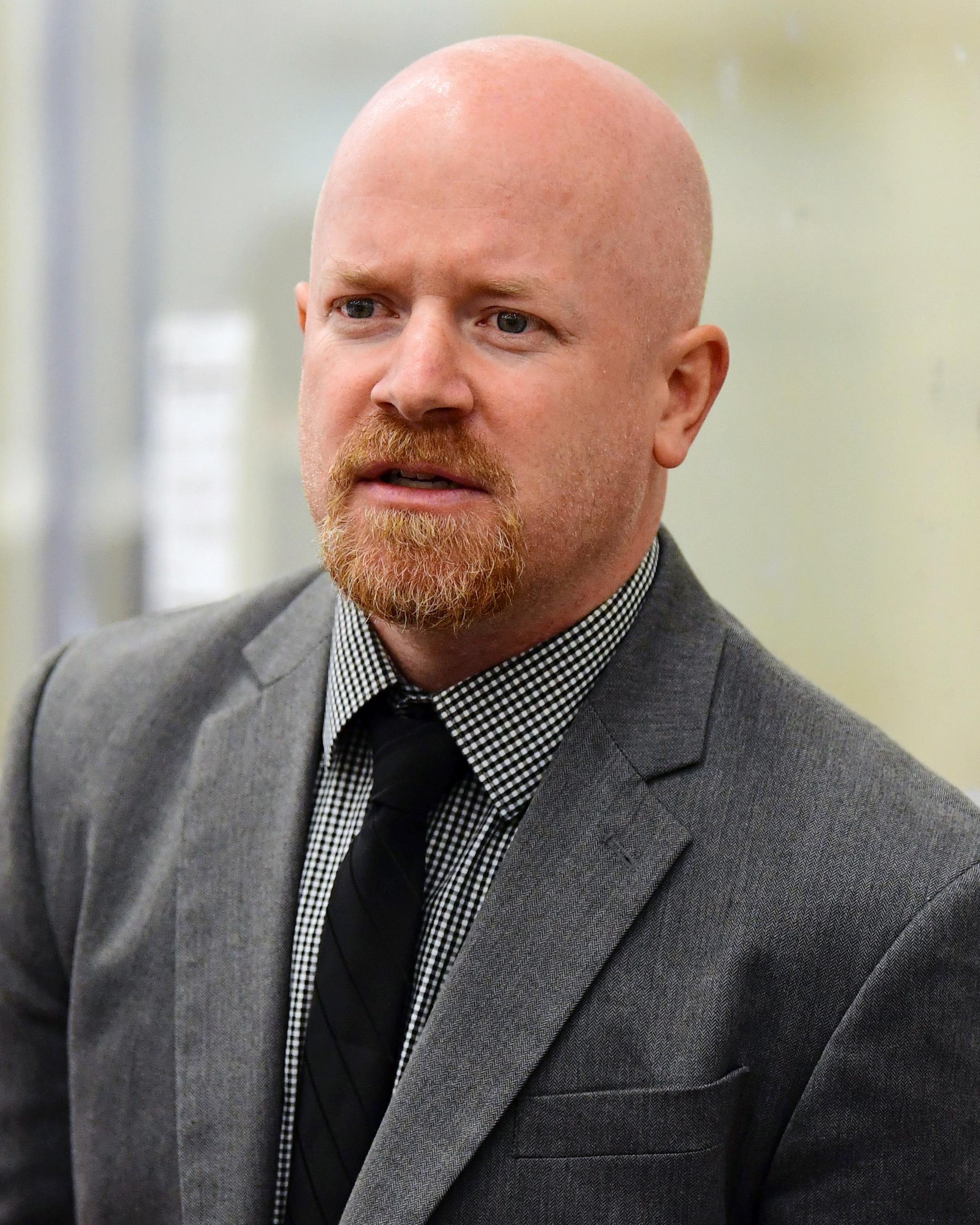 Then you add the friendship with Noreen, who stood up in Upton’s wedding, as well as learning under Carlson and Patterson as an Assistant Coach in prior USHL stints and you get a wealth of coaching knowledge that Upton has had a front seat view of. Carlson, Noreen and Patterson are first, second and fifth, respectively, in wins among active USHL Head Coaches, and entering this season, have a combined 35 years of coaching experience behind USHL benches.

While Upton acknowledged that a hot start isn’t the end-all-be-all in a long season, it’s a sign that this might be a different Capitols team than fans and other USHL Clubs have known in past seasons. Upton’s 2021-22 roster seems capable of becoming the first Capitols group to reach the Clark Cup Playoffs and seems ready and eager to turn around a Club that has never finished higher than seventh in the Eastern Conference, 12th in the league and has never had an above-.500 record at the end of the season.

Yes, it’s early, but this Capitols team has bought in. How far they’ll go remains the mystery.