Award Recognizes On- and Off-Ice Performance 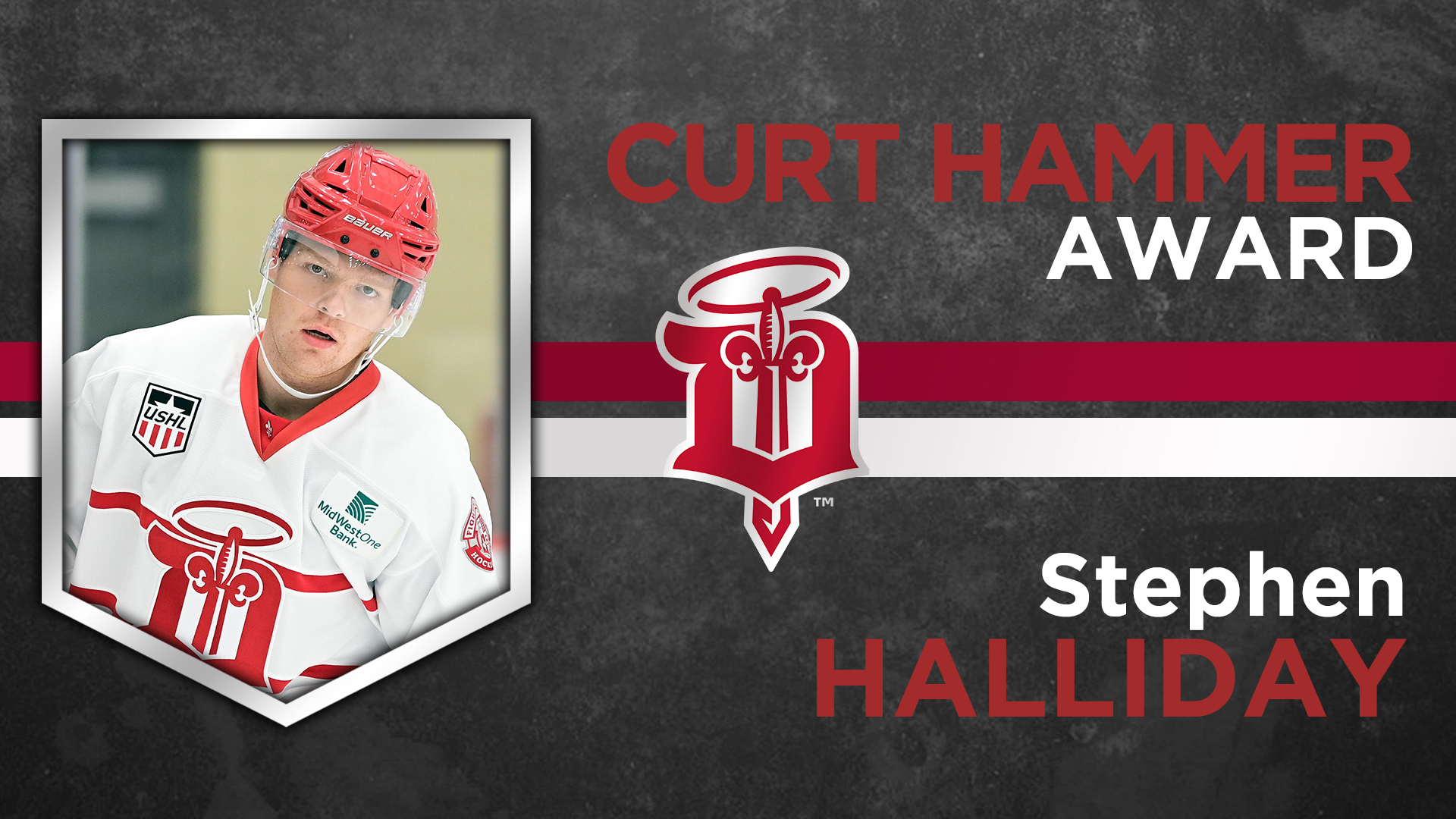 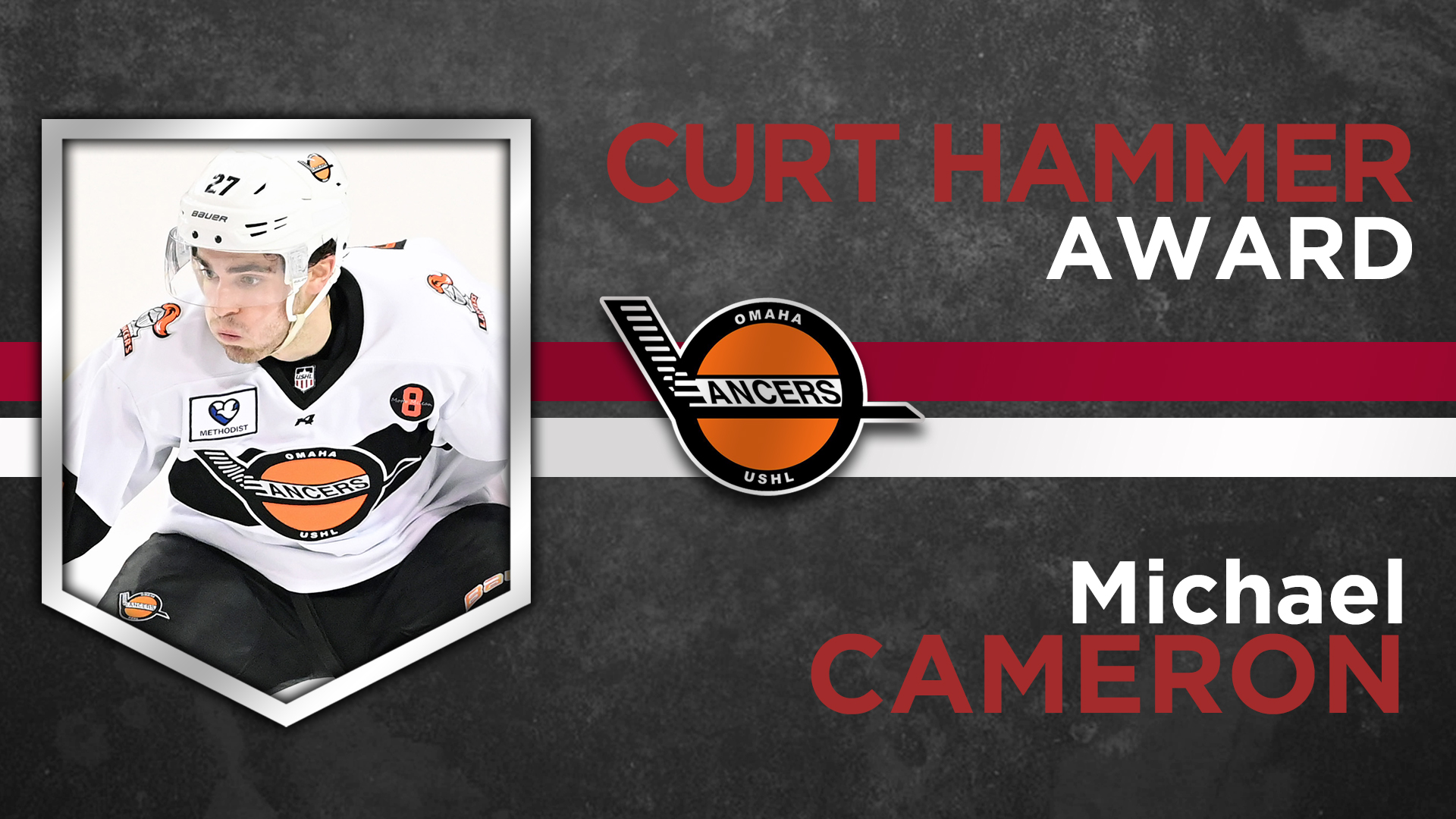 Dubuque Fighting Saints forward Stephen Halliday has been named the 2022 co-winner of the Curt Hammer Award. The Curt Hammer Award is given to the player, or players, who distinguishes themselves both on and off the ice by demonstrating outstanding performance skills, pride, and determination. It is named after the late Curt Hammer, who served in roles with the Des Moines Buccaneers and the USHL, and was a dedicated volunteer and supporter of hockey in the Des Moines community until he passed away from cancer in 1987.

Not only did Halliday prove to be arguably the best on-ice Fighting Saints player of all time, but he generously extended his hand to greatly impact the Dubuque community as well.

Directly after the conclusion of the 2020–21 season, Halliday led a tour of the Mystique Community Ice Center for young Christopher Klar, a local second grader who was diagnosed with a Wilms’ Tumor, a form of pediatric kidney cancer. He continued to lead the way by hosting Klar’s family and by honoring Klar as the “Hometown Hero” on the team’s Opening Night on October 9. Since then, Halliday and Klar have continued to remain in touch, and Klar has learned to skate to try to be just like his role model.

Halliday voluntarily put one of his record-breaking sticks up for auction during the Fighting Saints’ final home game of the regular season, with all proceeds benefitting the Dubuque Regional Humane Society. He proceeded to match the winning bid and raise $1,600 for the DRHS.

The third-year Fighting Saint routinely volunteered at Sara’s Dubuque Daycare to play with kids as young as a couple months old to preschool age. Halliday bonded with one child in particular, Parker, who would routinely attend Fighting Saints games while looking up to him as a role model. Halliday fostered Parker’s love of baseball and soccer during his visits and would meet up with Parker after games.

He regularly grew the game of hockey by volunteering at hockey camps and clinics throughout the previous three seasons in Dubuque. He took part in in-person and digital meet-and-greets for fans and team sponsors in the midst of stringent COVID-19 protocols throughout his playing time with the Fighting Saints. He was always the first player to reach out to Fighting Saints draft picks and affiliates, and built strong relationships with his teammates from the past and present.

“This award means a lot to me,” Halliday said. “Not only the charity work, or time at the daycare, but helping someone like Christopher. We will always be in touch. It’s always great to see someone going through a tough time have a big smile on their face, and he had that when he was at the rink. And, with the humane society, I’m a huge dog person. We have three at home.”

“Anything I can do help a cause I care about is something I take pride in.”

The Ohio State commit excelled in the classroom throughout his tenure in Dubuque. His election to the 2020 USHL All-Academic Team was just the beginning for his academic exploits, as he graduated from Dubuque Senior High School with honors. Halliday took college courses throughout the 2021–22 season and achieved a 4.0 GPA while balancing hockey and academics.

On the ice, Halliday became the USHL’s Tier I all-time scoring leader, and the Dubuque Fighting Saints’ all-time scoring leader. His career included being named a 2022 USHL First Team All-Star, earning two USHL Forward of the Week honors, and being selected to participate in the 2022 BioSteel All-American Game, a showcase of the most elite NHL Draft-eligible, American-born hockey players.

Halliday joins Aidan Fulp in the history of Fighting Saints who have won this prestigious award, which highlights contributions made in the community. Fulp won the award in 2020. Ryan Siiro, who played for the Fighting Saints during the 2011–12 season, won the award the following season as captain of the Sioux Falls Stampede.

The Omaha Lancers are proud to announce that the United States Hockey League has selected Lancers’ Forward, Michael Cameron to receive the Curt Hammer Award.

The Curt Hammer Award has been presented annually since 1989 in honor of the late Curt Hammer, recognizing a USHL player who distinguishes himself both on and off the ice by demonstrating outstanding skills, pride and determination.

Curt Hammer served as President of the Des Moines Buccaneers from 1984-87, as well as held the role of Secretary for the USHL. Hammer was a volunteer and supporter to the Des Moines and Buccaneer community during his time in the league until succumbing to cancer in 1987. The Curt Hammer Award is presented to allow his memory to live on, encourage players around the league to develop on the ice in a positive way, as well as off the ice within the community.

Cameron is the first Lancer to be presented this award since the 1990-91 season when Brent Cary shared the honor with Beau Bilek of the Des Moines Buccaneers. Carey played two seasons in Omaha, one of which he was named Captain. He later went on to have a successful five-year playing career at the University of Denver, including serving as Assistant Captain his last three years.

Cameron was on the Lancers’ roster for three seasons, starting in the 2019-20 season. Throughout his career, he appeared in 113 games, racking up 50 points in the process. The 2021-22 season was a breakout year for Cameron, tacking up 18 goals and 18 assists for a total of 36 points through 54 games played. Those statistics put him in second place on the Lancers’ squad for point-getting, only trailing teammate, Morgan Winters with 37 points on the year.

The impressive offensive play continued into the Lancers’ playoff run as he picked up four points in four games in the form of one goal and three assists, which played a critical role in the Lancers winning their first playoff series since 2010.

The experience in Omaha for Cameron had consisted of a good deal of community service. With him being eager to get out into the community and make a difference, he did service multiple times in the 2021-22 season alone. Including going to Boys Town National Research Hospital in downtown Omaha to meet with many children fighting a variety of conditions and those recovering from lifesaving surgeries.

The most notable impact Cameron made on the community was the joint effort between the Lancers and the entire Cameron family, presenting Michael Cameron’s Diabetic Buddy of the Game. With Cameron living with type one diabetes, he was able to meet and interact with a different child living with the same condition. The Diabetic Buddy would get to view warm-ups from the team bench, as well as talk and get a picture with Michael prior to the end of the warm-up period. Following the start of the game, the photo would then be presented on the big screen in the arena during a first period media timeout, telling the story of the Diabetic Buddy and allowing time for the crowd to give the child a standing ovation.

The Diabetic Buddy of the Game attracted attention from a local Omaha news network, WOWT, who came out to Liberty First Credit Union Arena to shoot a feature story spreading awareness for type one diabetics everywhere.

Cameron’s future will consist of him attending and playing division one college hockey at the University of Massachusetts – Amherst where he will represent the Minutemen well and continue to impress the Lancers’ community. Cameron will also be playing alongside now former Omaha Lancers’ Defenseman, Kennedy O’Connor.