Cale Morris looks to shine in USHL Game of the Week

Waterloo goaltender Cale Morris recalls his first game with the Black Hawks last year in Sioux Falls. He returns this weekend in the USHL Game of the Week free on FASTHockey. 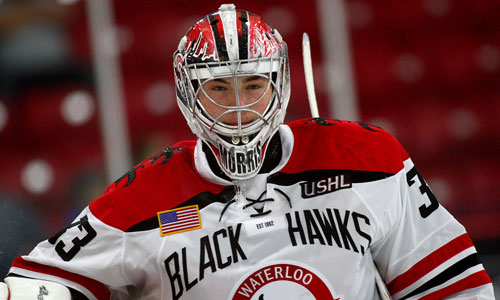 The Waterloo Black Hawks and Sioux Falls Stampede will be featured as the FASTHockey Game of the Week, free in HD at ushl.fasthockey.com this Saturday at 7:05 pm CT. Headlining the game are NHL prospects on both sides, as Waterloo’s David Cotton (Carolina Hurricanes), and Sioux Falls’ Jack Becker (Boston Bruins) and Ales Stezka (Minnesota Wild) take the ice, as well as NHL Central Scouting listed players Sam Rossini, Garrett Wait and Justin Wells who were identified as potential 2016 NHL Draft picks.

Despite all of the hype surrounding the game with NHL prospects, one player who plans to change all of the headlines will be Black Hawks goaltender Cale Morris.

Morris, a second year NHL Draft eligible goaltender, is playing in his third USHL season and is looking to continue his dominance since Waterloo acquired his rights last season.

“The last time I played in Sioux Falls was the first day after I got traded,” Morris recalls. “It was a whirlwind of emotions. It’s always a high-energy game because they have a lot of fans. It will be fun to get back to that arena.”

Sioux Falls had an average of over 6,000 fans a game last season in the new Denny Sanford PREMIER Center, as they went on to win the 2015 Clark Cup Championship on home ice. Morris in his debut stopped 15 of 16 shots in front of 7,119 hostile fans. It would be the beginning of something great for Morris.

Since his debut with Waterloo, Morris is 21-7-4 with a .935 SV% and 1.86 GAA and received a commitment to play college hockey at the University of Notre Dame. Current Notre Dame goaltender and Buffalo Sabres prospect Cal Petersen also played for the Waterloo Black Hawks.

“After getting traded it was a new opportunity with a new group of guys so it was nice to get to the rink, battle and get the win,” Morris said. “It was the turning point of the season.”

Morris’ domination since donning the red, white and black jersey has forced NHL scouts to give him a second look coming into this year’s draft. Although his name was left off the NHL Central Scouting list, it’s not an unrealistic thought to place the 6’1” goaltender as a possible draft prospect in 2016, as six of 37 2015 NHL Draft picks that played in the USHL last season were not originally listed on the preliminary list.

However, none of this concerns Morris as fans and scouts alike exchange notes on the goaltender that seems to be cool and collected after making highlight reel saves on a weekly basis. All of the extra talk and sentimental value of returning to Sioux Falls means nothing unless Morris can earn a win for his team.

“That game is up there with a couple other games that are pretty special,” Morris said. “Once I got there all the guys were welcoming which was great, but then to get the win for them was even better.”