Kenny and Christian Hausinger are chasing their hockey dreams on opposing USHL teams for the first time in their hockey careers. 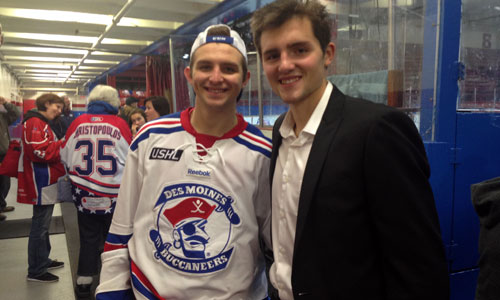 Brothers Kenny Hausinger (left) and Christian Hausinger (right) are enjoying their first season in the USHL.

Brothers Kenny and Christian Hausinger both woke up early on May 5th in their home back in Anchorage, AK to the sounds of their cell phones ringing. First Kenny, then Christian, both before 6:30am local time. On the phone was a USHL coach letting them know that they had been selected in the USHL Phase II Draft that morning.

Out of 463 players drafted, 37 rounds of selections and nearly 32 different states having players drafted, the Hausinger brothers had their names called third overall and 32nd overall on day two. Their brother Cameron had also seen his name called live on USHLTV the day before as the seventh overall selection in Phase I.

“It was a special moment for our family to have all three of us drafted,” Christian said. “Not only that, but we all went fairly high. It was good as a family to know we were noticed by this league.”

Being drafted by a USHL team does not secure a player with a roster spot. With only 368 roster spots available league-wide, and returning players occupying nearly half of those spots heading into the season, there was still work to be done.

After months of offseason training, team training camps and team tryouts, the Des Moines Buccaneers and Lincoln Stars made it official: Kenny and Christian were USHL players.

“Our dad is 6’5” and mom is almost five foot,” explained Kenny. “I guess Christian was lucky to get the size in the family.”

The family’s love for hockey wasn’t naturally passed down from either parent. Their dad had grown up playing basketball, baseball and football. The ponds in Alaska and neighborhood activity are what originally drew the boys to first pick up the game.

After a cousin introduced them to pond hockey, the love for hockey grew at an exponential rate. The two brothers, naturally fueled by competitive drive, would always find a way to play knee hockey or head out to the ponds for a few hours.

As they grew older, all four brothers would get involved and play 2v2 pick up games, with Kenny and Christian on opposite teams to ensure proper balance in age. With all of the countless hours with four young boys handling sticks and pucks, fueled by an uncontrolled sense of teenage competiveness, there was bound to be a mishap.

“The story that comes to mind was Christian and I were playing 1v1 with our dad as the ref to make sure nothing escalated. It was of course overtime or some sort of sudden death situation,” Kenny recalled laughing, knowing what was about to come next. “Christian managed to dangle me and got around me. Now, being the smart 12-year old that I am, I decided to throw my stick in an attempt to stop the puck. I hit Christian straight in the eye and we had to go get him stitches. Not a great memory for me, but I guess we can laugh about it now.”

This was the only memory the two shared of being pitted against one another. Growing up, their talent and competiveness was a benefit to whatever youth team they were playing for.

Just last year, the two brothers were able to both play for the Odessa Jackalopes in the NAHL. Kenny racked up 68 points in 57 games, a mark good enough for fourth best in the league. Christian matched his brother’s offensive production with 31 points from the blue line.

“Kenny is a really good set up guy and can rack up the points,” Christian said. “I know he hasn’t achieved what he wants to yet in the USHL, but I think he’s going to get on a roll and it’s going to come.”

“Christian complimented my game a lot in Odessa,” Kenny added. “I love playing with him because we always know where we’re going to be on the ice. He knows where to find me even when he doesn’t see me.”

The two brothers expect to be reunited at Sacred Heart University after their junior hockey careers. Both are committed to play college hockey after their time in the USHL, and they look forward to combining their separate USHL experiences while in college, and take the best from Lincoln and Des Moines and hope to implement it into their game.

As for their time spent away for now, the brothers have enjoyed their independence and seem to be thriving in their new homes. The Buccaneers and Stars play one another eight times this season, including Lincoln’s home opener back in September and just last Saturday.

Coaches Dave Allison and Chris Hartsburg haven’t been shy about letting the two compete against one another, as Christian noted the time he successfully pinched his brother in the offensive zone.

“I made sure to grab his stick as he was skating away to make it a little harder to go back for the puck,” Christian said laughing. “I was hoping I’d get a little chuckle out of him when he realized who was holding onto his stick.”

As for the Hausinger parents back at home, they have both been able to watch their children play on FASTHockey. Arrangements have been made at work for both their mom and dad to get home at four o’clock for the 7:00pm CT game times. It’s another example of how far their parents have gone to support their kids’ dreams.

In Alaska it is more difficult, and expensive, to travel and play at youth showcases. It’s something that Kenny recognized as part of the special DNA Alaskan players have.

“You see it in the NHL with guys like Casey Bailey and Brandon Dubinsky, Alaskan-born players have a lot of skill but they always work hard,” Kenny said. “You don’t have luxuries, showcases or the ability to just bus to a tournament. So when you do get the opportunity you work as hard as you can, but more importantly we always have as much fun as possible and enjoy every minute of it.”

“It all goes back to having fun on the pond,” Christian added.

The Hausinger brothers hope to add their name to the list some day, but first they must continue their success at the highest level of junior hockey in the United States. Both Christian and Kenny noted the adjustment it took in the first few weeks into the season.

“The USHL is very fast and requires such a high level of skill,” Kenny said. “I enjoy even watching the younger guys have success. I’m in awe of some of the things guys can do. Coming to the USHL from the NAHL is a big difference because you see some of the things guys can do to just wow you. Everyone in the USHL has that wow factor and that’s why they’re playing here.”

Christian has already immersed himself into his local Lincoln culture and is enjoying the first place spot that the Stars have jumped to in the standings.

“[The Lincoln Stars] have always been known as a hard-hitting team, but this year we have the skill threat incorporated into the game as well,” Christian said. “I think we are only going to get better.”

The Hausinger brothers face one another again October 27, 2015 as the Lincoln Stars host the Des Moines Buccaneers at the Ice Box. And you better bet that mom and dad will be watching.