Growing up in Germany Parker Tuomie had always wanted to play in the USHL and go on to play in college hockey, he just wasn't sure how he'd get there. 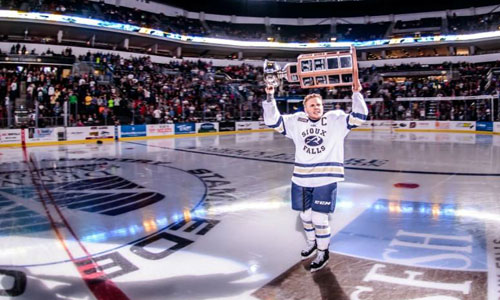 Parker Tuomie’s hockey story begins before the Sioux Falls Stampede forward was born. Tray Tuomie, Parker’s dad, graduated from the University of Wisconsin in 1991 just one year removed from winning the NCAA Championship with the Badgers. Tray would move to Germany and play for over 14 seasons, and would later coach for another five in the DEL league.

While playing in Germany, Tray started his family and in 1995, Parker would be born in Haßfurt, Germany. As a kid, Parker had the opportunity to play for teams in Berlin and Düsseldorf and would eventually travel internationally to Minnesota when USHL scouts first discovered him.

“Dallas Steward who was with the Stampede at the time first saw me playing in some Minnesota tournaments with my German team,” Tuomie explained. “He thought he had found a good low-key player and the Stampede went on to draft me.”

Tuomie, a duel-citizen, was drafted in the 2013 USHL Phase II Draft in the 10th round, 149th overall. In order to help further his development, Tuomie played for the Wenatchee Wild (NAHL) for a complete season where he averaged a point-per-game in 49 games.

Heading into the 2014-15 season the Sioux Falls Stampede organization believed in Tuomie’s talents and placed him on the official 23-man roster. Tuomie wouldn’t take long to impress the staff, and fans, as he scored the first-ever goal in the new Denny PREMIER Event Center.

“It gives me goose bumps just thinking about it right now,” Tuomie said smiling. “It was my first USHL goal and something I’ll never forget. It’s not every day you can score in front of 10,000 fans.”

Tuomie’s first period goal, 11 minutes and 41 seconds into the period, made 10,678 Sioux Falls fans jump to their feet, an exercise repeated seven months later when Tuomie and the Stampede won the Clark Cup on home ice.

“It was a special ride going into playoffs as the last seed, thinking of ourselves as the underdogs and beating the first seed rival Musketeers to begin playoffs,” Tuomie said. “It was incredible to see how hard we worked for each other. It was an unbelievable title to win.”

Nearly 9,000 fans returned opening night this year to watch the Stampede raise the championship banner. For Tuomie, the recently named Sioux Falls captain, it was a special moment for him and his teammates who were able to skate the banner and raise it themselves to the rafters.

“I got to skate out with the Cup in my hands,” Parker said. “To raise the banner in front of those fans is something you don’t get to do too often. My phone was blowing up and I got a lot of calls from guys who were on the team last year and are in college now.”

Looking back, through all of the successes and failures along the way to winning a Clark Cup, Tuomie had traveled further than any of his teammates. Growing up in Germany with a dream of playing college hockey is not necessarily commonplace. Although his dad created interest for Tuomie with old stories and advice on how to get there, Parker had to put in the time and effort to get to the USHL from overseas.

“If you’re in the USHL you’re playing in the best league in the United States and there are so many elite players that go on to have NHL futures and big-time college hockey players,” Tuomie said. “It’s a great opportunity to play in this league, and taking the step from here to college should prove to be another big step with the size and speed. It’s something I’ve always wanted to do.”

Tuomie is a part of a veteran core that is currently leading a younger Sioux Falls team. Other veterans such as Stefanos Lekkas, Collin Peters and Lawton Courtnall have all stepped up to make sure that newcomers are comfortable with their new systems, living arrangements, and ultimately having fun while wearing a Sioux Falls sweater. And it’s working. The Stampede are currently sitting in fourth place in the Western Conference, the same location in the standings from where they made their Clark Cup Playoffs run from a year ago.

“Right where we want to be,” Tuomie said. “It’s important for everyone on this team to know that this is a new season. We are creating something entirely new here, and we’re going to keep chipping away and find our way in the USHL.”

Parker Tuomie is currently committed to play college hockey at Minnesota State University, Mankato. Tuomie previously played for the Wenatchee Wild (NAHL), Jungadler Mannheim U18 (DNL), and Düsseldorfer EG U16. Tuomie leads the USHL in goals scored (8) and is riding a five-game goal scoring streak heading into the weekend of play.